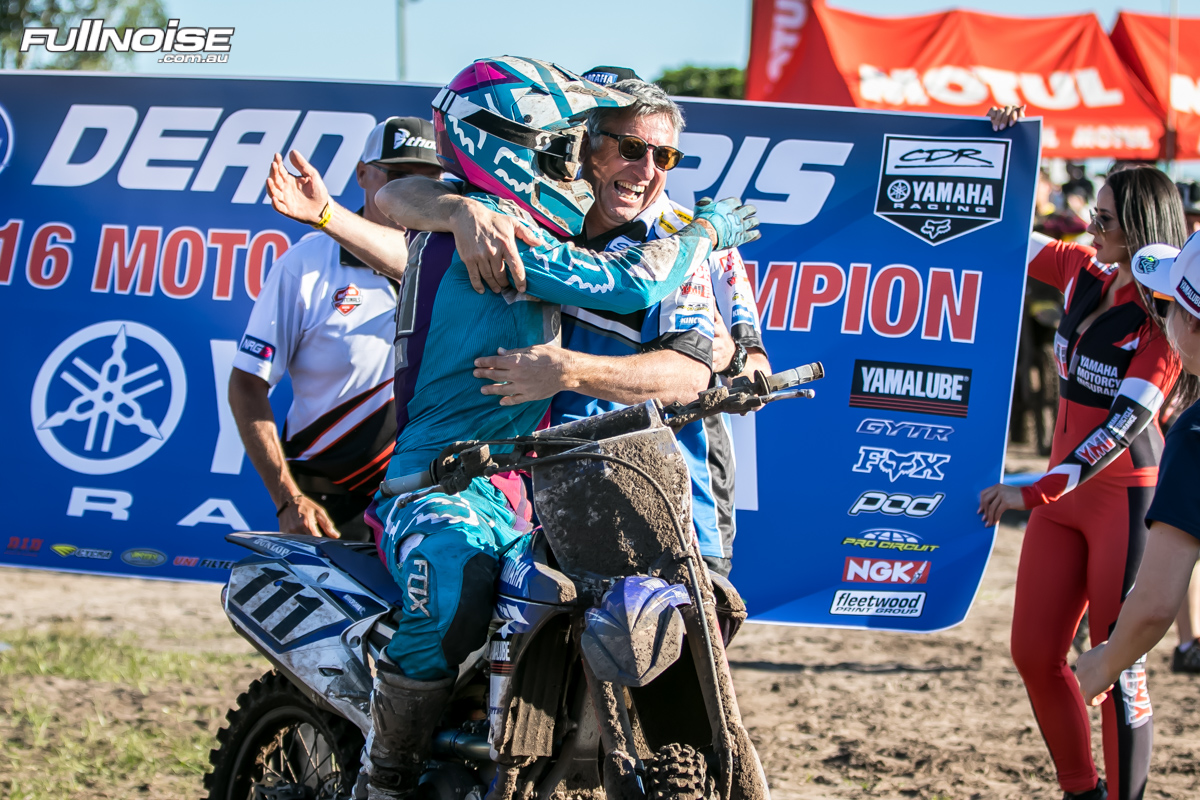 This year‰Ûªs 2016 Thor MX1 Champion was crowned this afternoon, with CDR Yamaha‰Ûªs Dean Ferris managing to fight off his competitors to clinch the title at Round 10 of the Motul MX Nationals at Coolum.

Thousands of spectators flooded the Coolum Pines MX Track on the Sunshine Coast today, with fans treated to some of the highest quality racing that Australia has delivered in years.

From the second bikes hit the dirt at Coolum this morning, this year‰Ûªs championship contenders seeked to take advantage of the track time in warm up ahead of GoPro Superpole kicking off, and with additional championship points up for grabs, Ferris, KTM‰Ûªs Kirk Gibbs, Todd Waters, Kade Mosig and Dylan Long were determined to lay everything on the line for one more lightening fast lap of the year.

After qualifying fastest yesterday, Ferris opted to hit the track first for Superpole and when he‰Ûªd put down his flying lap, a 1:45.287 was enough to secure the three crucial championship points, and take the the GoPro Superpole victory.

Waters was the second quickest this morning (1:45.511), followed by Mosig (1:47.194). Unfortunately for Gibbs, Superpole was a lap he‰Ûªd rather forget ‰ÛÒ after finishing in fourth, the red plate holder missed out on any additional points, seeing his championship lead over Ferris dwindle to only three points. Long concluded Superpole without putting down a time after suffering a bike issue. 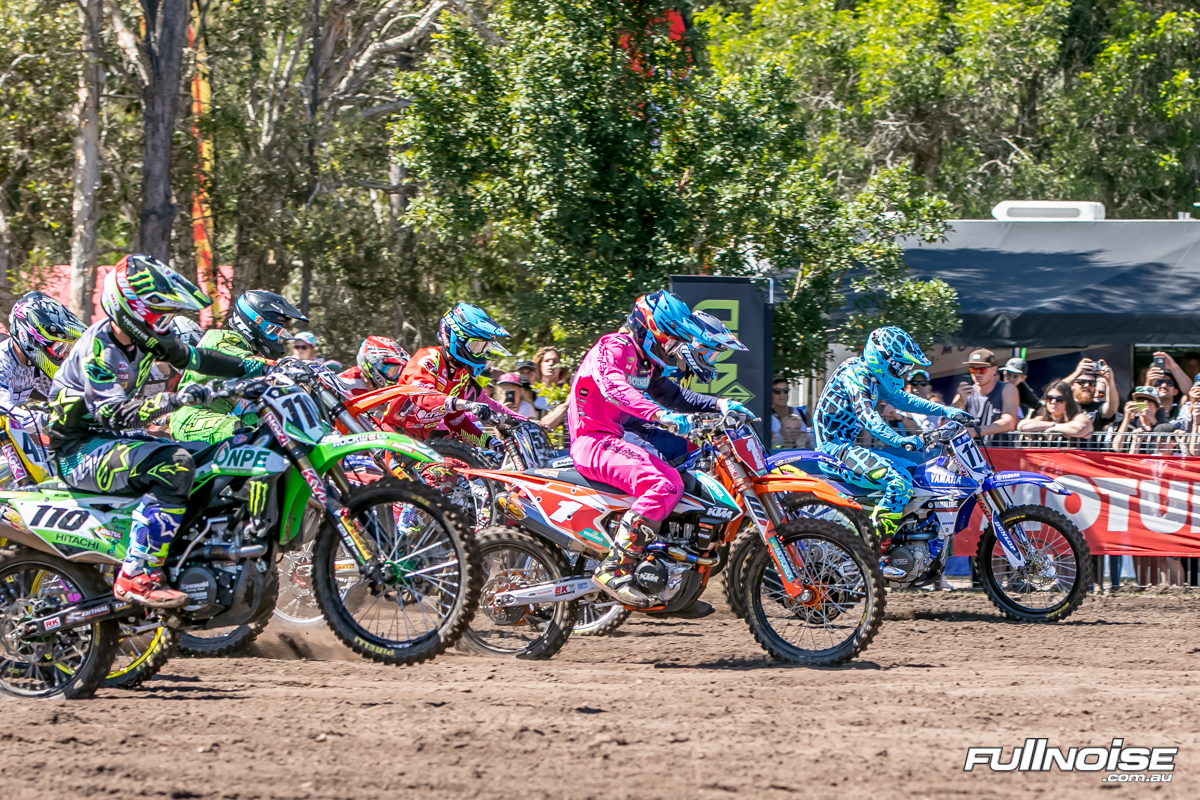 Rider launch into action at the start of the day in the MX1 class - Credit: Aaryn Minerds
When the Thor MX1 class headed to the line for race one, thousands of spectators dotted the fence line ready to watch the ultimate championship battle unfold, and with Ferris and Gibbs both within striking distance of the 2016 title, the action on track did not disappoint.

When gates dropped, it was KTM Motocross Racing Team‰Ûªs Kirk Gibbs who took the first MXStore holeshot, but after only one lap, CDR Yamaha‰Ûªs Ferris had demanded control of race one.

After two laps, Waters had found his way in to second position, whilst red plate holder Gibbs had slipped back to third. National Pump Monster Energy Kawasaki duo Kyle Peters and Mosig were back in fourth and fifth places followed by DPH Motorsport‰Ûªs Jacob Wright.

But it was heading in to lap three that spectators were treated to a battle for the race lead, with Suzuki‰Ûªs Waters making the move on CDR Yamaha‰Ûªs Ferris, relegating the title hopeful to second position. 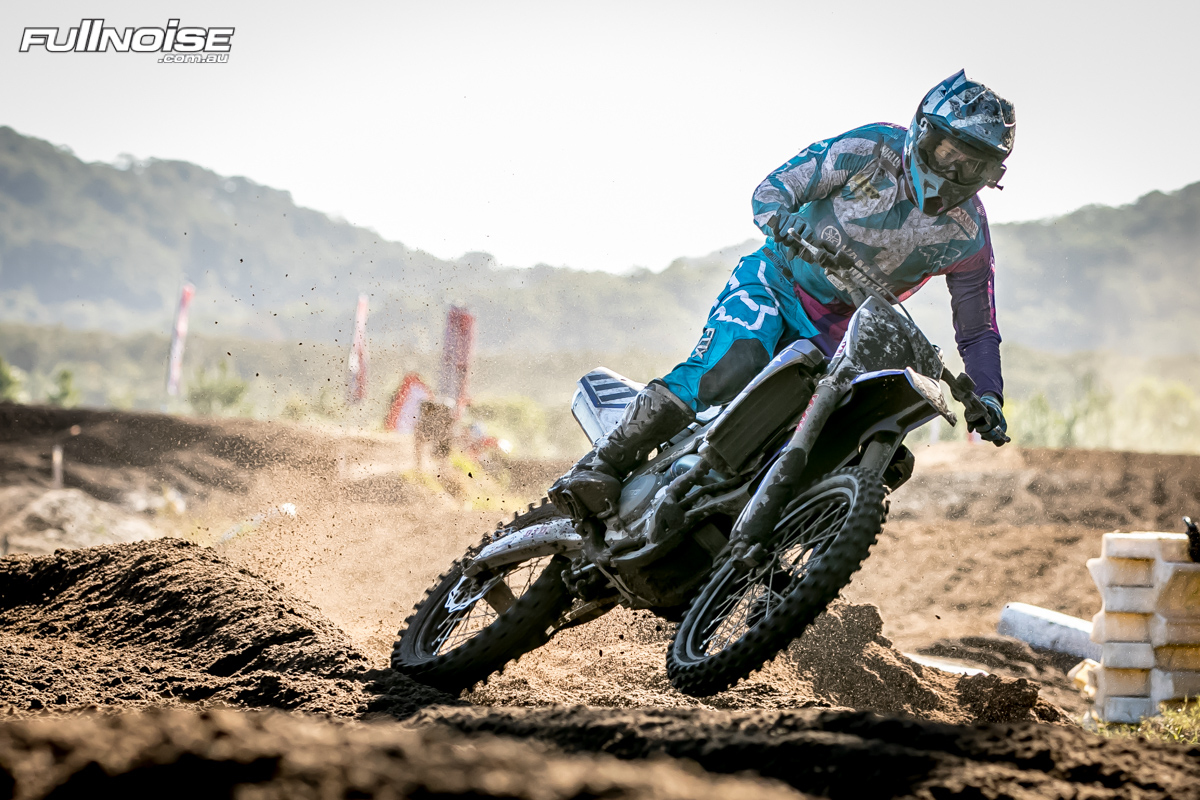 Dean Ferris on his way to the round and championship win - Credit: Aaryn Minerds
And the fight for positions did not stop there. Gibbs also began to come under fire from National Pump Monster Energy Kawasaki‰Ûªs Peters for third place, the two going head to head for the final podium position. And by the time riders headed in to lap seven, Peters had got the job done.

In what was a huge shock to onlookers, Ferris received a ten second penalty at the five lap mark after riding inside a marker during lap one, but it didn‰Ûªt seem to phase the Yamaha rider, because only a few turns later, Ferris had reclaimed the race lead.

Despite being out in front, by the time rider‰Ûªs reached the halfway mark, Waters was effectively in the lead due to the penalty applied to Ferris, American import Peters was in third, followed by defending champ Gibbs who continued in fourth position. Mosig, Hamish Harwood and Crankt Protein Honda Racing Team‰Ûªs Jay Wilson all occupied positions fifth through to seventh.

But with less than ten minutes remaining, Ferris checked out, leaving Waters, Peters and Gibbs well and truly behind him ‰ÛÒ putting himself in the box seat to wrap up moto one as the new championship leader.

And when the chequered flag flew, Ferris got the job done, taking the opening moto win ahead of Waters who crossed the line in second. American Peters wrapped up the opening race in third, followed by Gibbs whose title hopes were hurt during race one after finishing in fourth.

Mosig, Hamish Harwood, Wilson, Long, Craig Bolton and Daniel Banks all wrapped up moto one inside the top ten. 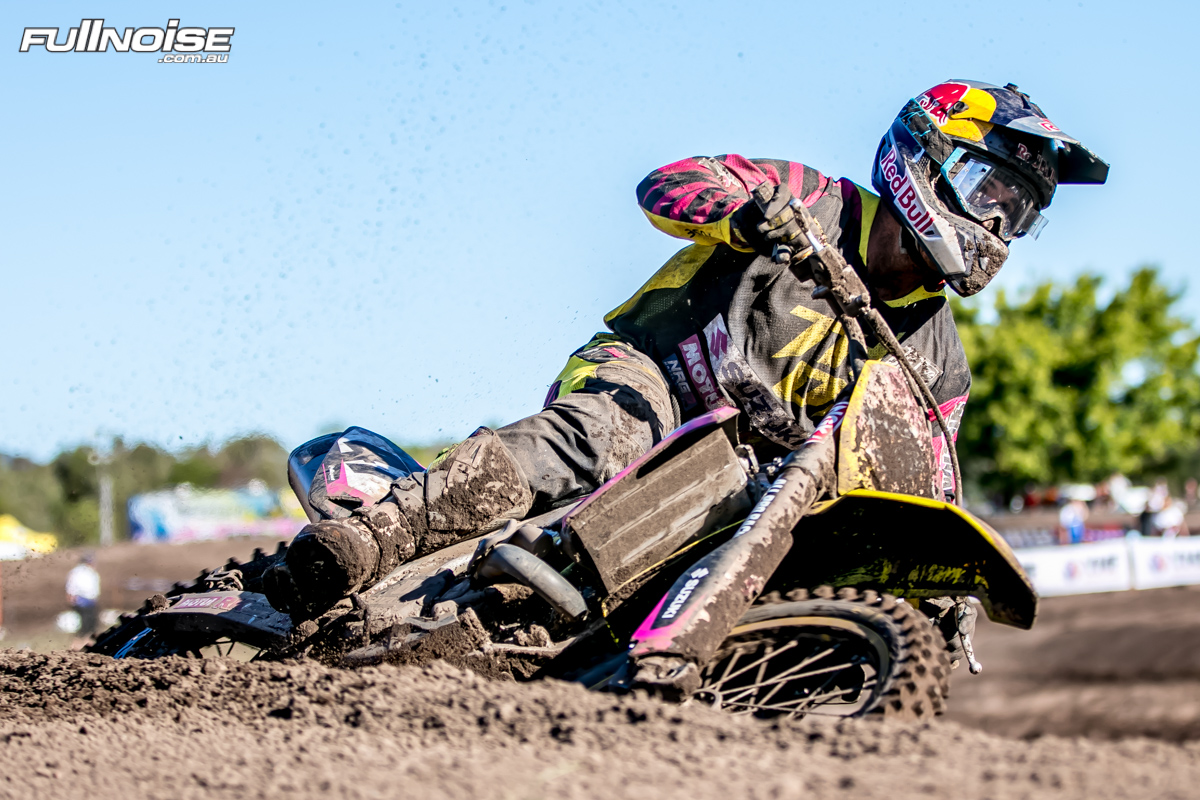 Todd Waters was unstoppable in race two on his way to the round win - Credit: Aaryn Minerds
With a 2016 Thor MX1 title up for grabs, and Ferris entering the final race with a four-point lead over Gibbs, fans were treated when bikes lined up for the last moto this afternoon -with both riders putting in one last fight for this year‰Ûªs championship.

When gates dropped, Gibbs once again got the jump off the start and secured the final MXStore holeshot, however Waters was right on his rear wheel, followed by Ferris, setting up the final race as one of the best of the season!

After two laps, the running order saw Gibbs out in front with a marginal gap over Waters, while points leader Ferris continued to lurk in the background in third position, followed by Kawasaki duo Mosig and Peters.

Despite Gibbs being out in front, Ferris made the pass on Waters during lap three, putting the CDR Yamaha rider in second place, and in the perfect position to take the title - making for nail biting racing for the final moto of the day.

With more than half the race remaining, Gibbs began to feel the pressure of both Ferris and Waters who had both closed in on the KTM rider over the past two laps, treating spectators to the fight they‰Ûªd been waiting for.

Another rider who was capturing the attention of the crowd, was Crankt Protein Honda Racing Team‰Ûªs Long, who had passed Mosig and Peters and Wilson to slot up to an outstanding fourth position.

But with Gibbs, Ferris, and Waters all within striking distance of each other out in front, by the time riders headed in to lap nine, the action on track really heated up. Waters found incredible energy and within only a few turns had passed both Gibbs and Ferris, shocking thousands of spectators who were watching the final moto unfold. 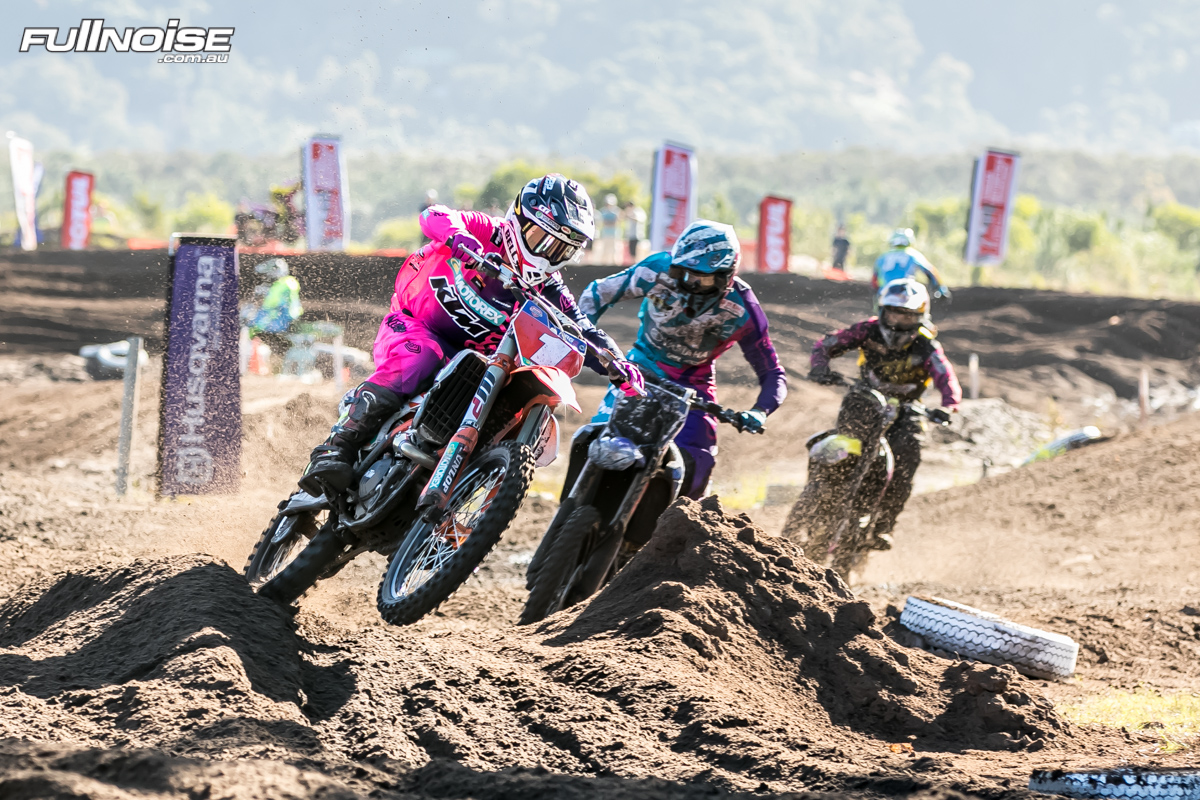 Kirk Gibbs fought hard to keep Ferris and Waters behind him in the second moto but eventually finished in third for the round Credit: Aaryn Minerds
And the fight for positions did not stop there. With Waters increasing his lead to five seconds, Ferris closed in on defending champion Gibbs, and with four minutes remaining, Ferris made the pass for second position.

By the time the Thor MX1 class received the last lap board this afternoon, Ferris was in the box seat to clinch the 2016 title after ten gruelling rounds.

And despite Waters taking the final race victory of the day, it was Ferris who had reason to celebrate - the CDR Yamaha crossing the line in second position in the final moto and securing the 2016 Thor MX1 Championship honours. Third place in race two was taken by Gibbs followed by Mosig in fourth.

With 2,1 results Wilson Coolair Motul Factory Suzuki‰Ûªs Waters secured the round victory from Ferris and Gibbs, but the man of the moment was CDR Yamaha rider Ferris, who despite being the only rider to register a DNF this year, collected the Thor MX1 Championship at Coolum today.