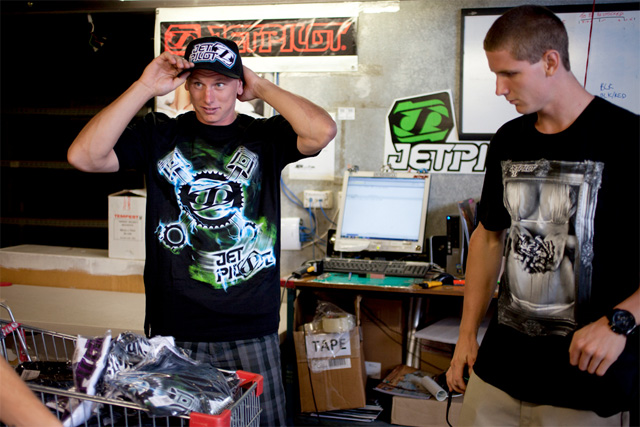 Carlton Dry Honda Thor Racing has teamed up with Jetpilot in a new partnership that will see team merchandise feature the distinctive design signature of the leading action sports brand.

The team's MX1 class contenders, former World Champion Ben Townley and current British Champion Brad Anderson, and MX2 gun Ford Dale, are looking forward to wearing Jetpilot and will have the chance to display the range this weekend at the opening round of the MX Nationals.

"Honda Racing is synonymous with world-class racing and the Australian motocross and supercross Carlton Dry Honda Team is one of the most professional outfits on the circuit," said Attard.

"When we decided we wanted to align with a team for 2012 we contacted the team to discuss options.

"The sponsorship is innovative and allows both of us to reach new markets collectively.

"The initiatives we have in store for 2012 will spearhead some of our new strategies."

Honda Motorcycles General Manager, Tony Hinton, is encouraged by the new signing which will see the team exposed to a desired market through collaboration on new designs and team apparel.

"Honda is a company that prides itself on building championship-winning motorcycles.

"I believe the alignment of brands will help in hitting the core market the Carlton Dry Honda team target.

"I am excited by the new designs and look forward to their release."

The team is on-track for its 2012 MX Nationals campaign, which begins at Conondale near Queensland's Sunshine Coast on Sunday.

Pre-season testing and preliminary races on the class-leading CRF450 and CRF250 have Townley, Anderson and Dale confident and ready to fight for moto and outright wins.