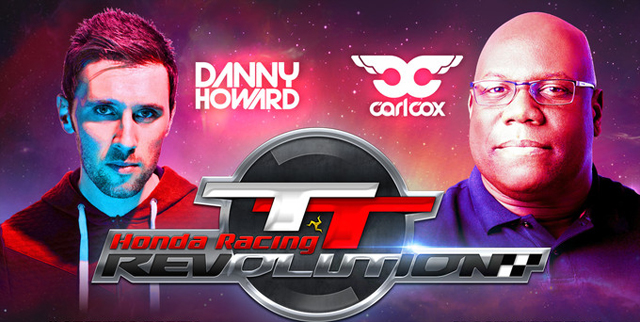 Honda has unveiled plans for the inaugural Honda TT Revolution ‰ÛÒ a series of events during the Isle of Man TT festival that in 2014 will see internationally-renowned DJs Carl Cox and Danny Howard headline exclusive opening and closing parties to top and tail race week.

The Honda TT Revolution will begin on the eve of the Superbike TT, Friday 30 May, with the Race Week Opening Party featuring rising superstar Danny Howard (from BBC Radio One), who was given his first date at Space in Ibiza by Carl Cox.

Howard will be supported by the Futuristic Polar Bears, who will warm up the crowd with their unique brand of uplifting house. The exclusive night will mark the start of the world‰Ûªs most famous road racing event.

Seven days and nine epic races later, the Isle of Man TT will draw to a close with the final night of the 2014 Honda TT Revolution, the Race Week Closing Party, headlined by legendary Ibiza resident Carl Cox.

Taking place on Friday 6 June following the most important on-track battle of the week ‰ÛÒ the Senior race ‰ÛÒ the night promises to round off the 2014 TT in spectacular style.

‰ÛÏI‰Ûªm incredibly excited to be a part of the Honda TT Revolution,‰Û