Carglass-Honda Racing has signed Dylan Walsh to the team, who will be competing in the European 250 Motocross Championship aboard the Honda CRF250.

The British-born 19-year-old has experienced racing in both the United States and New Zealand, where he is currently second in the standings for the 2017 National Motocross Championship (MX2 class).

This year has already seen Walsh take four moto wins, including a clean sweep in round three of the New Zealand Nationals, and top-three finishes in all but one moto. Walsh currently sits only 11 points behind the current championship leader.

Walsh has also competed in both supercross and motocross events in the United States during 2016; including the Daytona Ricky Carmichael Supercross, James Stewart Spring Championship and the Loretta Lynns Amateur Motocross National. The talented youngster also claimed fourth in the 2016 Monster Energy Cup in Las Vegas (Amateur All-Stars 250 class).

‰ÛÏI am really excited to announce that I‰Ûªm riding for Carglass-Honda in the EMX250 class, they have a good bike and a good team," Walsh said. "I can‰Ûªt thank them enough for this opportunity and I‰Ûªm ready to get the season started with them! I‰Ûªve always wanted to race in Europe so I‰Ûªm pumped to be heading over!‰Û 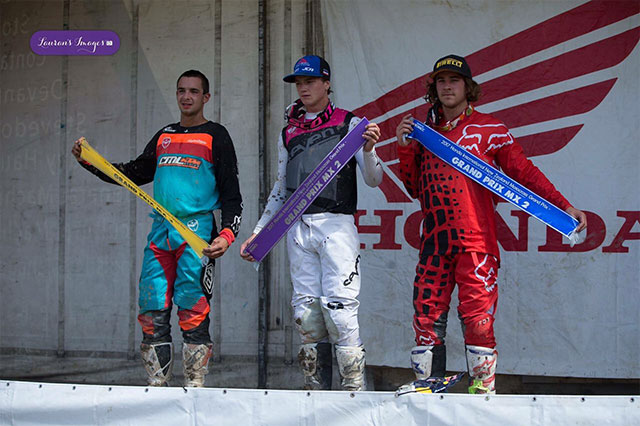 Dylan Walsh on the podium (Center) in New Zealand. Credit: Lauran Robinson - Lauran's images
Patrick Claessens, Team Manager, added, ‰ÛÏI am very happy to have signed Dylan Walsh. Dylan is doing very well in the New Zealand Championship at the moment and we are looking forward to seeing him in the European races on his Honda CRF250. Together with the team, Dylan will work hard to be in the battle at the front of the races. Dylan‰Ûªs first race here in Europe will be in Harfsen (9 April) and one week later the EMX250 championship will start in Arco.‰Û