Can the reigning Motul MX Nationals Champ hold on at Shepparton? 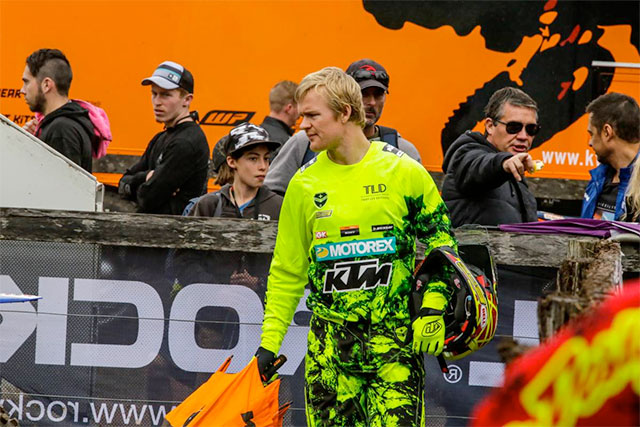 Being the reigning Australian Motocross Champion sounds like a dream come true for most, but KTM Motocross Racing Team‰Ûªs Kirk Gibbs knows all about hard work involved, and is now well regarded for his ‰Û÷never give up‰Ûª attitude - this season his determination has been forced to come in to play more than ever before.

This year, Thor MX1 Red plate holder Gibbs has led the championship since his home round at Murray Bridge, however CDR Yamaha‰Ûªs Dean Ferris (currently second in the championship standings) has won the last two consecutive rounds and is slowing creeping up on Gibbs‰Ûª championship lead with the pair now separated by only six points.

Today, we sat down with last year‰Ûªs MX1 champ Gibbs to see what it‰Ûªs been like managing this year‰Ûªs championship, and just how important Round 8 at Shepparton in Victoria is going to be this weekend.

You‰Ûªve had the red plate since Round 4 now, as we get closer to the finish line, do you feel the pressure of this championship more and more?

Yeah a little bit, I‰Ûªm not going to lie. But I feel as the points lead sort of dwindles away a little bit, that I need to stop worrying about that, and just concentrate on riding well. Obviously I had that knee injury at Nowra, but I‰Ûªm pretty happy with how the past two rounds went considering that. I didn‰Ûªt get much bike time in before last week, but since then I‰Ûªm feeling really good and I‰Ûªm looking forward to getting to Shepparton and trying to bounce back and gain some points.

Dean Ferris has been very consistent the past two rounds and is riding very smart, do you see him as a big threat?

I always knew that Dean was a threat, he‰Ûªs really fast and a great starter but I don‰Ûªt see him as more of a threat than usual now. He does seem to be riding a bit smarter since he had that crash at Wanneroo, but we‰Ûªve still got three rounds to go, and the goal for me is to just keep plugging away. It‰Ûªs going to be a tight finish, and hopefully it will come down to the last few rounds to figure out who‰Ûªs going to get it.

You suffered that knee injury at round six at Nowra, currently would you say you‰Ûªre at 100 per cent, or are you just doing whatever you can to get through each round?

I believe at the last round I was doing what I could to get through, and just doing the best I could, so I don‰Ûªt think I was 100 per cent at Conondale but I was reasonably close ‰ÛÒ the muddy conditions made things a bit harder. Since then, I‰Ûªm feeling a lot better, and although my knee isn‰Ûªt quite at 100 per cent, I think it‰Ûªs as good as it can be, and I‰Ûªm ready to get out there and give it my all.

You‰Ûªre yet to win a GoPro Superpole so far this year, with the points so tight, is it going to be really important for you to try and get your first Superpole win at Shepparton?

Oh definitely. Dean (Ferris) has been winning a lot of them and has made a lot of points there ‰ÛÒ it‰Ûªs sort of a bit frustrating in that sense. But last year I did really well in Superpole, so I‰Ûªve just got to keep pushing and making sure that I‰Ûªm in there to at least score some points if not be on top. It‰Ûªs definitely something that would be awesome to get a couple of them and score some more points. As long as I‰Ûªm scoring points in that top three then we‰Ûªre keeping it as close as we can.

Having raced at Shepparton before, do you believe you have an advantage over guys like Dean (Ferris) and Todd (Waters) who will be racing Shepparton for the first time this weekend?

Yes, and no. I believe that those guys have been around the world racing and they can pick up tracks pretty easily. So having raced there before is sort of a little bit of an advantage, but in saying that when we went to Nowra both Todd and Dean hadn‰Ûªt been there before and they both did very well, so I expect a tough fight from both of them at Shepparton. If we can be on our A-game this weekend and do the best I can, I will also use a bit of my knowledge from last year.

How crucial is this round at Shepparton to the overall championship?

Its obviously getting a lot tighter so anything I can do to benefit myself or gain some more points this round will be awesome. This weekend is going to be tough and I‰Ûªm not necessarily expecting to gain a lot of points but I‰Ûªm just going to try and chip away at this championship because I know that every round from here on out is going to be very tight.

The eighth round of the 2016 Motul MX Nationals will be held at Shepparton in Victoria this Sunday July 31.