Can Busto Beat Bou in His Own Back Yard? 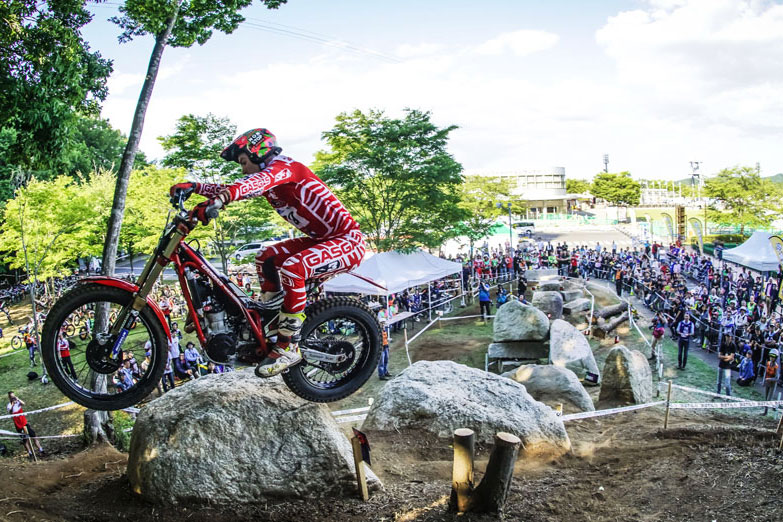 Jamie Busto will be looking to make it two in a row when he tries to back up his Japanese win with a win at Andorra this weekend. Photo: trialgp.com
Rising Spanish star Jaime Busto has already beaten Toni Bou in Honda's homeland and will look to inflict another defeat on the reigning champion as the series moves on to Andorra this weekend, where Bou now resides.

Busto shocked Trial fans worldwide when he signed for Gas Gas at the end of the 2017 season following three years with the mighty Repsol Honda team.

Leaving the biggest team in the FIM Trial World Championship paddock was certainly a surprise move, but the twenty-year-old from Gorliz on Spain's northern Atlantic coast fully justified his decision when he took a career-first TrialGP victory on day two in Japan right at the beginning of this month.

His win did not exactly come out of the blue. After overcoming a shaky start to the 2017 season he was a constant threat last year, achieving a career-first podium finish with second at round three in Andorra - a result he equalled on day two at TrialGP USA - on his way to a best-ever finish of third in the World.

After matching his 2017 outdoor ranking in the 2018 FIM X-Trial World Championship - including a career-first victory in Paris - the writing was on the wall for his rivals. Busto means business!

He has been forced to work hard over the winter to adapt to the two-stroke power of his new Gas Gas after three years of campaigning the four-stroke Honda. Now, with that all-important first win under his belt, he needs to maintain his momentum if he is going to be the man to finally dethrone his former team-mate Toni Bou.

"I'm very happy," says Jaime. "We have been working very hard with the whole team and the work paid off in Japan. I feel very strong because we have seen that we can be ahead. Winning gives us more motivation for the next events."

Having performed so well there last year when he finished second behind Adam Raga - TRRS he knows that if he can beat Bou again in the Pyrenees principality he could come away the series lead.

Of course, when you are competing against the brilliance of the eleven-time Trial World Champion that is much easier said than done, but the shy Spaniard - having achieved that breakthrough victory in Japan - has a newly-discovered quiet confidence to his riding aboard the Gas Gas.

"The truth is that I have felt very comfortable with the bike since the first day," Busto said. "The bike is going very well and that has made my adaptation very fast. It is a very competitive bike and it is the bike I have felt the strongest on so far."