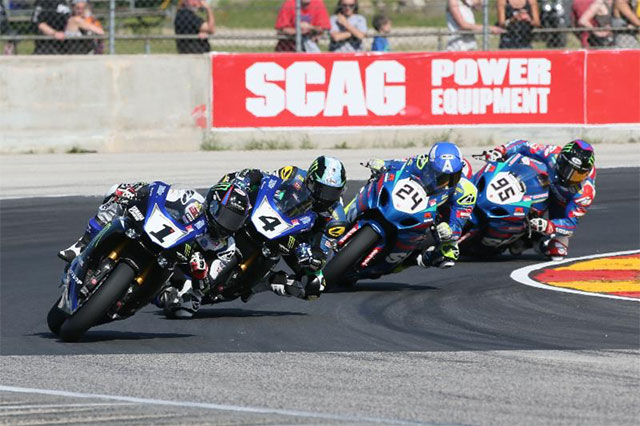 Monster Energy Graves Yamaha's Cameron Beaubier said Sunday's second Superbike race was the most fun of any of the Superbike races he's been involved in. And you get the feeling he'd be saying the same thing even if he hadn't won.

But win he did, the 23-year-old MotoAmerica Superbike Champion adding a victory in race two to his race-one win for a clean sweep at Road America in the Honda Superbike Showdown of Wisconsin.

The two wins also propelled him into the lead in the 2016 MotoAmerica Superbike Championship, 176-169, over his teammate Josh Hayes. It also gives him a leg up on the competition in the Honda Superbike Showdown, a three-round (six races) series (Road America, Barber Motorsports Park and Laguna Seca Raceway) within a series that will award its winner a brand-new 2016 Honda Civic Sedan.

With his perfect 50 points, Beaubier leads the Honda Superbike Showdown, 50-33, over Roger Hayden and teammate Toni Elias, the two Yoshimura Suzuki riders leaving Wisconsin after splitting second- and fourth-place finishes. Hayden is third in the MotoAmerica Superbike Championship - 27 points behind Beaubier and five points ahead of his teammate Toni Elias.

The two wins were the fifth and sixth wins of the year for Beaubier and the 16th and 17th of his Superbike career. With his 16th career win, Beaubier moved into a tie with MotoAmerica President and three-time 500cc World Champion Wayne Rainey for 10th on the all-time win list. With his 17th win later in the day, Beaubier pulled even with 2006 MotoGP World Champion Nicky Hayden for ninth on the all-time list.

"After crashing yesterday and Friday, I was a little nervous going into today," Beaubier said after race two. "I especially didn't want to throw another bike down the road but you have to ride on the edge if you're going to beat these guys.

"It was really good to be able to get the double here. I've had good success here, but I've never doubled here even on a 600. Every time I come here it seems like I have a good weekend. The race was crazy and was probably the most fun Superbike race I've ever had. Battling back and forth and you don't get a four-bike battle for the lead all the time in Superbike racing." 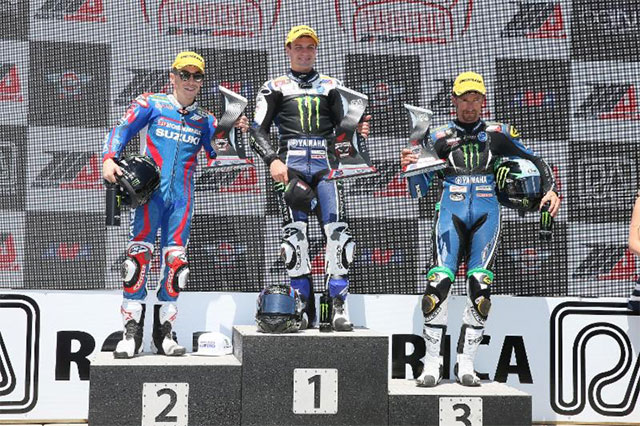 (From left to right) Roger Hayden, Cameron Beaubier and Josh Hayes celebrate after the second Superbike race. Photos by Brian J. Nelson.
Hayes was having a good run in the first race until he ran off track and had to make up the ground he'd lost. He ended up third.

"I thought I had spots where I was good and there were spots where Cam (Beaubier) was good," Hayes said after the first of two races. "I had a lot of fun being up at the front and trying to figure out how everything was going to play out. I got a pretty bad run out of the chicane and Cam came by but I thought, 'Oh, he's a sissy on the brakes. I will just get him down in Canada Corner.' But I might have missed that a little bit.

"It was harder getting back on the track than it was going off it as there was a pretty big lip in the curbing out there. I had to make sure I got her turned and squared up so I could jump that sucker back on the track."

Hayden knew he didn't have enough power to draft past Beaubier on the run to the flag. And he also knew he wouldn't be able to hold the lead if he led out of that final corner on the run up the hill.

"They had a little bit of steam, but there were a couple of places I think I could have passed in the infield," Hayden said after his race-one runner-up finish. "I was just hanging on there and I was pretty comfortable because the draft was helping me. I didn't want to start racing Cam because I could see that Josh was coming on my pit board. On the last lap I tried to get close enough but I made a couple of mistakes and Cam just had enough to hold me off. I would have needed a lot to get by him."