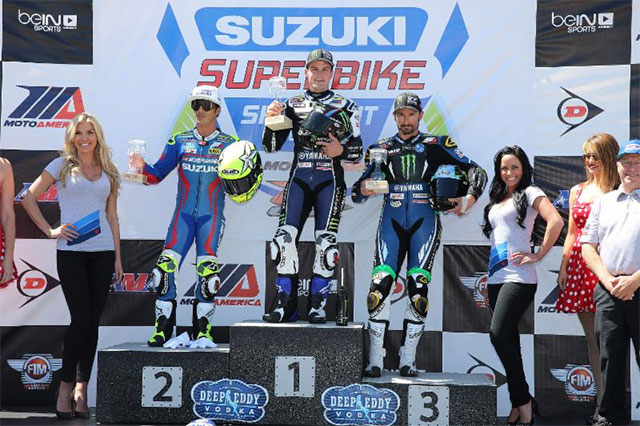 Cameron Beaubier took the first step towards putting his nightmarish opening round behind him today, the Monster Energy/Graves Yamaha rider earning his first pole position of the season in a riveting Superpole session at Road Atlanta, the site of round two of the MotoAmerica AMA/FIM North American Road Racing Championship.

Beaubier, who crashed and finished fourth in the two races at Circuit of The Americas a week ago, rebounded to earn the sixth Superbike pole position of his career on a sunny day at Road Atlanta during qualifying for the Suzuki Superbike Shootout of Georgia.

"After last weekend, it was just nice to come here and not touch the bike and just put our original base setting there and just pound out laps," Beaubier said. "I think I did almost 60 laps yesterday. It was good to just clear my mind and get my confidence back. I felt really good in Superpole. That Superpole tire ended up lasting for two laps so I got two back-to-back pretty good laps with maybe one mistake. I think for all of us it's just a little tough to cruise around and then just hammer one lap and get everything out of the tire. Overall, I feel good and my race pace was good."

Beaubier was the only rider to dip into the 1:24s, with his 1:24.844 on the new Dunlop qualifying tire putting put him .224 of a second ahead of Yoshimura Suzuki's Toni Elias, the Spaniard continuing his torrid start to the season as the replacement rider for the injured Jake Lewis.

"In Europe, when I found these type of tracks, I felt really bad with the situation and I never find the good setup," said Superbike Championship points leader Elias on his first trip to Road Atlanta. "That's why I was worried before. When I arrive I try to see the right lines and I see the bike was working really well.

"I didn't find the same problem as Europe and I become a little bit more calm and trying to work with my team to solve some little problems," Elias continued, "Now it is good. This is very difficult track - I think the most difficult track I have ever been (to). But is also the one that gives me the most satisfaction and great feelings - (with the) up and down, especially the fast one I think is 300 km (186 mph). I never felt this before this feeling."

Beaubier's teammate Josh Hayes will complete the front row for tomorrow's two Superbike races, the four-time AMA Superbike Champion ending up .301 of a second behind his teammate.

"Things are definitely better here (than in Texas a week ago) and I'm feeling pretty confident I will be in there for the race," said Hayes. "The race is going to be a long one. It's not just the three of us because there are a couple of other guys that whenever you put them into the mix, they will hang in there for a long time.

"This place produces a lot of good racing so I don't think anybody is going to be splitting too easily and it should be a really fun race. I would have liked to be higher than third on the list, but I improved over half a second from what I had been doing. I think there are some areas of the racetrack where could have done a little better, but I can't say it doesn't bother me when I go out and I have four guys lined up behind me. My head wasn't exactly in the right place when I started my lap so all things considered I got out of it okay and I look forward to the race tomorrow."

Row two will be led by COTA pole sitter Roger Hayden, the Yoshimura Suzuki rider the final rider to crack the 1:26 barrier as he lapped at 1:25.480 in Superpole 2. Hayden will be joined by Wheels In Motion/Motosport.com/Meen Motorsports' Josh Herrin, the Georgia resident lapping at 1:26.145 on his Superstock 1000-spec Yamaha R1. Herrin was the top Bazzaz Superstock 1000 qualifier. Latus Motors Racing's Bobby Fong, on the Superstock-spec Kawasaki ZX-10R, will complete row two.