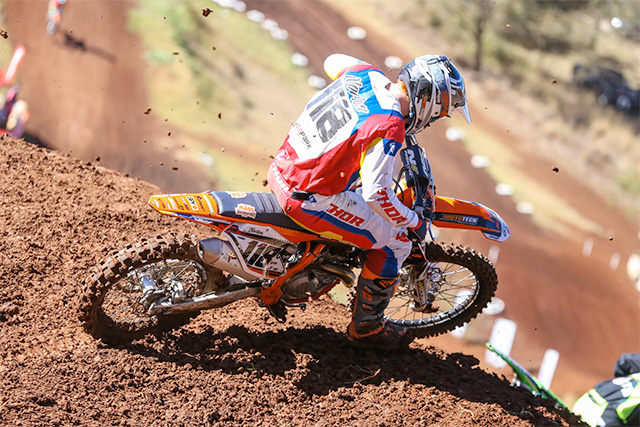 With the conclusion of of the Pirelli MXD class at the previous round of the Motul MX Nationals, 16-year-old - and now two-time MXD round winner - Callum Norton threw in an entry for a class more befitting his significant physical stature, and rode the Thor MX1 class in Toowoomba.

As if he‰Ûªd been busting out 30-minute motos on 450s all year, Norton finished a brilliant tenth on debut, powering his Moto Tech KTM 450 SX-F to 12-11 finishes.

"I had nothing to lose since the MXD was done, so I rode in the 450s at Toowoomba. It was tough doing 30-minute motos at high intensity against those boys, but I learned a lot, and I ended up 10th overall, so I was really happy with that," Norton said,

"Just lining up next to some of the best guys in Australia and the world was great to me. I was beside Ferris for the first start, and just being around those top guys felt awesome. I was nervous for the first one, but then I rode a bit better in the second. A few boys came over and said it was cool to see me racing up with the big boys and encouraged me. I think most of them knew I was up out of Under 19s.

"I‰Ûªm pretty good friends with Longy (Dylan Long) who gave me a few tips going into the last moto, and I know Daniel Milner through doing Hattah and he was great too. I had a battle with Kayne Lamont in both motos, and in the last one I pulled away in the last bit, which was nice. I just tried to stay consistent and see where I could finish at the end.

"The 450 for 30 minutes was tough, those boys are 30 minutes flat stick, but I loved being on the 450, especially around Toowoomba on the big hills and all that, it just helps. With my weight and size it really helps to pull me off the corners and off the start. The 250 I‰Ûªm always struggling to get starts on. Not sure what I‰Ûªll be doing next year but it‰Ûªs just good to get the experience racing against those guys and see what they do," Norton concluded.