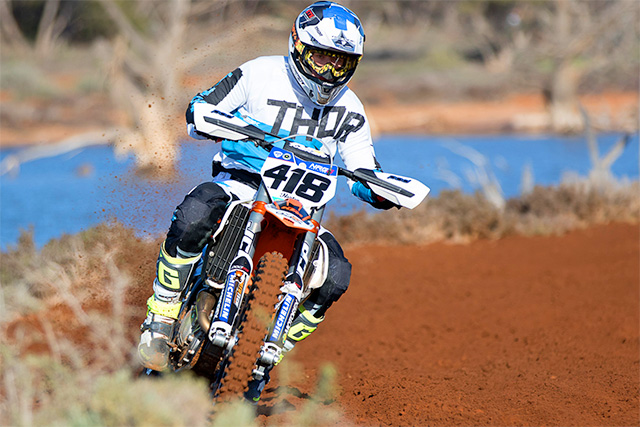 Moto-Tech KTM rider Callum Norton announced his presence at the top end of the sport in a big way at the weekend‰Ûªs Penrite Hatttah Desert Race.

The Victorian 16-year-old, competing in his first year of seniors, had already had a last start win in his regular job ‰ÛÒ the MXD class of the MX Nationals ‰ÛÒ just a week earlier.

But that was against Under-19s.

At Hattah on Sunday, Norton‰Ûªs fourth outright made him the next man home behind the all-conquering KTM 500 EXC-F-mounted triumvirate of Daniel Milner, ‰Û÷Chucky‰Ûª Sanders and Lyndon Snodgrass ‰ÛÒ and he was less than three minutes behind the latter.

What‰Ûªs impressive is that he did it aboard a KTM 450 EXC-F ‰ÛÒ winning the 450 class by a whisker after running down Finke hero Ivan Long in the final minute of his ride.

What‰Ûªs more impressive is that he did it while stopping every lap for fuel, halting once to adjust his handlebars - which had slipped down from a g-out ‰ÛÒ and a second time to repair a flat tyre!

‰ÛÏIt was awesome, the pass came down to about two minutes to go on the track and I ended up winning the 450 class and getting fourth outright!" Norton said.

"Ivan (Long) led me the whole way, but my bars fell down about three laps in and then I got a flat tyre about five laps in, so I had to pull in twice on top of refuelling each lap.

"With the flat I dropped back to ninth, but then I ended up getting up to fifth, and with a lap to go I was a minute down on Ivan and I started reeling him in. I got him with just a little bit to go, and I‰Ûªm stoked with fourth, and winning the class is unreal.

"I won four junior Hattahs in a row, so this year was my first senior one, and it was brutal, but awesome.

"That was my first time racing a 450 on anything outside of motocross. It‰Ûªs good for me because I‰Ûªm 85 kilos, so it gives me that bit more go in the deep sand.

"I love the whole Hattah weekend. Friday night you go out and put your bikes on display and meet everyone and have a good chat and laugh and then the Saturday you go out and do Prologue and have fun and watch the juniors, where there‰Ûªs some fast kids coming through. Then on the Sunday, it‰Ûªs four hours of probably the hardest racing that I‰Ûªve ever done, but it‰Ûªs good fun at the same time, and it‰Ûªs so rewarding if you have a good result.

"The Factory guys let me pit next to them and they lent me a quick-fill fueller, and they helped me out when I got a flat, so I can‰Ûªt thank them enough. Milner, Chucky and Lyndon were awesome guys; when I came in with the class overall and in fourth outright, they all came over and gave me a bit of a hug and said well done. They were stoked with me. It was a good feeling!‰Û 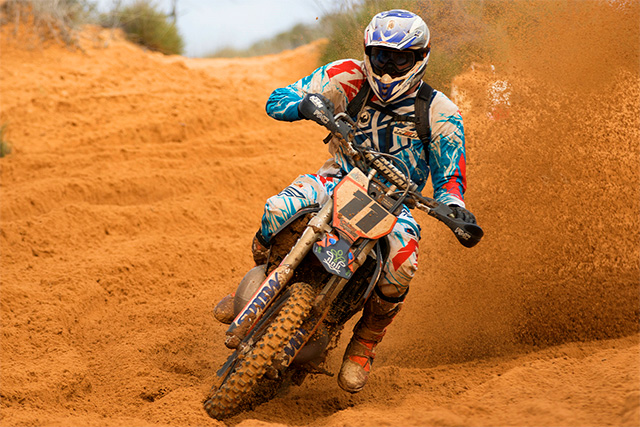 Nathan Trigg won the Over 251cc 2T. Credit: John Pearson
Getting noticed in among the glut of fast KTM-mounted desert aces is no easy feat, but Nathan Trigg managed it, too.

The 23-year-old farmer used the same Trigg Racing Team KTM 300 EXC with which he successfully defended his Finke Open 2-stroke title a month ago, to Prologue sixth, then he sweetened his starting position to third in the Top Ten Shootout, and took seventh in the main event.

The man from Ouyen, just an hour from Mildura, could only watch as the big four-strokes exploited their top-gear torque advantage down Hattah‰Ûªs long sandy straights, but still only six of them beat him home.

‰ÛÏI had a really good Prologue ‰ÛÒ I got third and I thought I was going to be right up there, but then we took off on the first lap and we got onto some big straights and I just could not keep up to the 450s and 500s," Trigg explained.

"I came in after the first lap way back in ninth, and I just had to hang in there. I made my way back to fifth or sixth there at one stage, but I hung in there and ended up in seventh. I was battling with Callum Norton and Lachlan Terry through the middle of the race, and for two or three laps you could have thrown a blanket over all three of us, it was really good. Probably the most I‰Ûªve ever duelled with someone at Hattah ‰ÛÒ normally you see someone and they‰Ûªre gone, but not this time. It was awesome fun. Next year I‰Ûªll be back on a bigger bike and chase an outright podium," Trigg concluded. 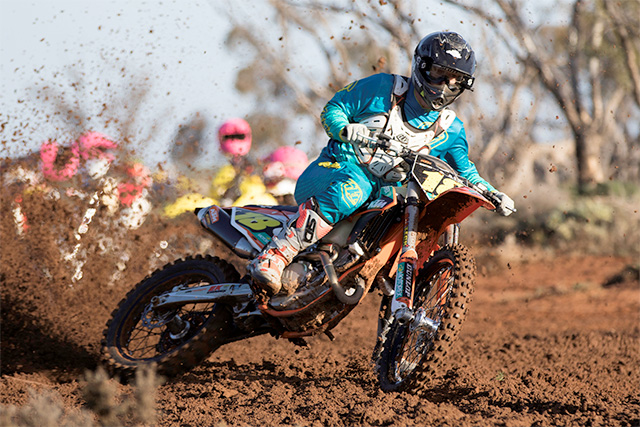 Mason Semmens won the Hattah Saturday Juniors.
Saturday is junior day at Hattah, and just as it has for six of the last seven years, this one meant a victory for KTM Factory Junior Racing Team rider Mason Semmens.

After a week spent training with KTM Off-Road Team riders Daniel Milner and Lyndon Snodgrass, the Victorian KTM 250 SX-F rider was the only junior to bust into the 18-minute laps on his way to a four-minute victory over KTM-mounted Corey Hammond and Joshua Brierley.

"I‰Ûªve won my junior race at Hattah six out of the seven times now. The competition is always good at Hattah and you always have to push your hardest. It was a good day; I prologued first and led every lap of the race, so I can‰Ûªt complain," Semmens said.

"There‰Ûªs no other race like Hattah for juniors, you don‰Ûªt get opportunities to hit top gear in a race, and keep it pinned there for a minute‰Û_ Next year I‰Ûªll be in seniors so it will be a whole different experience again. I‰Ûªm looking forward to that. I‰Ûªd been out with Lyndon and Daniel Milner all week, that definitely toughened me up, I reckon it helped a lot. They‰Ûªre good people in the Factory Team ‰ÛÒ all the boys. Mick, Blizzo and Harry do a great job of the bikes and with GK they run a very professional show. It‰Ûªs good to hang around it and get to know a few things.‰Û