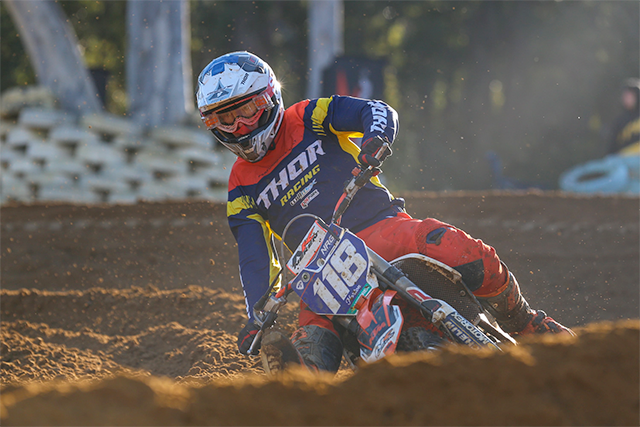 KTM mounted Callum Norton proved that consistency is the key to success, racing to two third place finishes to collect the Pirelli MXD round victory at Nowra in New South Wales yesterday.

Following a productive mid-season break, the Pirelli MXD class were impressive from the get go at Nowra yesterday morning, heading out for practice and qualifying in chilly conditions to determine their gate picks for when racing commenced later in the day.

At the conclusion of the qualifying session it was SD3 Husqvarna‰Ûªs Kaleb Barham who was fastest on track, throwing down a 1:46.747 ahead of series points leader Jy Roberts (Husqvarna) who clocked in a 1:46.959, while Riley Dukes secured third pick of the grid with a 1:46.970 lap time. 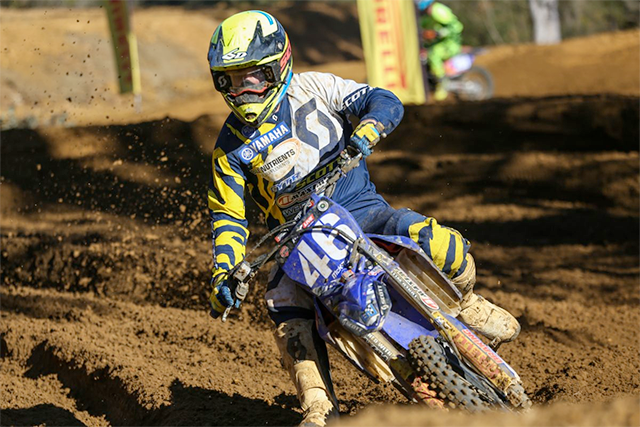 Hugh McKay was the winner of the opening moto. Credit: MXN IMages
When bikes lined up for the Pirelli MXD class‰Ûªs first race of the day, spectators watched on in anticipation, eager to see which riders could use the mid-season break to their advantage. And when gates dropped it was Yamalube Yamaha Racing Team‰Ûªs Cooper Pozniak who took the Raceline holeshot, while Bulk Nutrients WBR Yamaha‰Ûªs Hugh McKay slotted in behind him.

Unfortunately for fastest qualifier Barham, moto one was cut short ‰ÛÒ suffering what appeared to be a mechanical issue, the Husqvarna rider forced to walk his bike back to the pits after only a lap.

After only two laps on track, Pozniak, McKay, Cody Dyce and Isaac Ferguson bunched up, treating spectators to an all out battle for the lead, and with the Pirelli MXD class well-known for it‰Ûªs unpredictability, all eyes were on the front runners who were battling harder than ever around the tight and technical Nowra circuit. Dyce dropped the pace after four laps and slipped back to sixth position, which relieved the pressure on Pozniak and McKay who continued to maintain first and second places.

By the halfway point in moto one, Pozniak began to feel the pressure from McKay who had found his rear wheel, and all it took was Pozniak to take an incorrect line, and the Bulk Nutrients WBR Yamaha rider snatched up the lead.

As moto one progressed the surface began to get rougher, and riders were getting caught out by the hidden square edges, but one rider who found his flow early was McKay ‰ÛÒ the Yamaha rider holding off Pozniak who continued to chase his tail in second, while Norton remained in third. Despite a poor start, red plate holder Roberts had made his way through the pack and with only a handful of laps remaining, maintained fourth position.

But it was the consistency of McKay that paid off at the conclusion of moto one, who crossed the finish line to collect his first race win of the season from Pozniak and KTM‰Ûªs Norton who finished in second and third respectively. Roberts concluded race one in fourth followed by Ferguson in fifth. Yamalube Yamaha Racing Team‰Ûªs Dyce finished in sixth, followed by Dukes, Fogarty, Dickson and Maximus Purvis who completed the top ten. 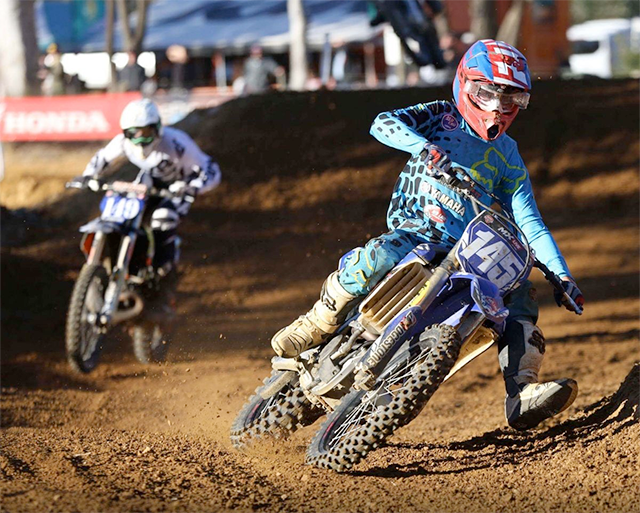 Maximus Purvis surprised many with his speed and consistency taking out the second moto. He will be one to watch
In the final moto it was KTM mounted Ferguson who took the second Raceline holeshot and shot off into the race lead, followed by Maximus Purvis in second and Yamalube Yamaha Racing Team‰Ûªs Dyce in third.

Surprisingly, little known Purvis made the move on Ferguson after only three laps, and despite not being the most experienced rider on track, captured the crowd‰Ûªs attention for all the right reasons.

With only 20 minutes to run in the final moto for the Pirelli MXD category, after only a handful of laps riders had settled in to their positions. The running order by the ten-minute mark, saw Purvis continue to lead from Ferguson in second, while Dyce maintained third. Behind the top three, SD3 Husqvarna‰Ûªs Barham was having a far more positive ride in fourth, followed by McKay and Roberts in fifth and sixth.

But after registering a DNF in moto one, Barham was on a charge in race two, and by the five lap mark the Husqvarna rider made the move on Dyce, snatching away third position.

Despite finishing in tenth in moto one, Purvis was unstoppable on the Nowra circuit in the second moto this afternoon, continuing to fight off Ferguson and Barham in second and third behind him.

As the Pirelli MXD class reached the final stages of their second race at Nowra, Purvis was in the box seat to take his first ever MXD race victory, meanwhile both Roberts and Dyce fell victim to the challenging Nowra circuit, making costly mistakes that saw the pair slip down the standings.

But when the chequered flag flew it was an impressive performance from Purvis which saw him take the final Pirelli MXD victory at Nowra, second place went to KTM‰Ûªs Ferguson while KTM‰Ûªs Norton finished in third. Fourth place went to Husqvarna mounted Dukes, while Fogarty, Roberts, McKay, Barham, Dyce and Pozniak completed the top ten in race two.

When the points were tallied from both motos yesterday it was the consistency of Norton which awarded him the Pirelli MXD round victory at Nowra, second place went to Bulk Nutrients WBR Yamaha‰Ûªs McKay, while third went to Ferguson (KTM).

‰ÛÏToday was awesome ‰ÛÒ I had two consistent motos and finished on the box both races so I‰Ûªve come away with the overall so it‰Ûªs awesome,‰Û