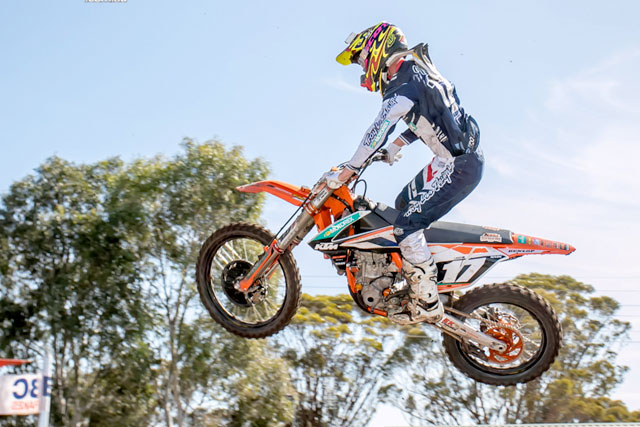 KTM Motocross Racing Team‰Ûªs Caleb Ward showcased his undeniable talent in the Motul MX2 class today, taking the Motul MX Nationals round one win at Horsham, in front of thousands of spectators.

The Motul MX2 class were the first bikes to hit the track in Horsham this morning for their 25-minute practice and qualifying sessions, and when the green flag waived, signalling the commencement of qualifying, the front runners for the 2016 season were quickly determined.

At the conclusion of the 15-minute qualifying session DPH Motorsport‰Ûªs Jed Beaton was awarded first gate pick in the Motul MX2 class, with a quick lap time of 1:56.773, ahead of Factory KTM‰Ûªs newest recruit Ward, followed by National Pump Monster Energy Kawasaki Racing Team‰Ûªs Jake Moss who was handed third pick of the grid this morning.

When race one for the Motul MX2 class kicked off, SD3 Husqvarna‰Ûªs Luke Arbon took the first holeshot of 2016, and after one lap it was no surprise to see Davey Motorsport‰Ûªs Jayden Rykers and KTM‰Ûªs Ward following Arbon closely behind in second and third places.

With 30 minutes to get the job done, Arbon began to separate himself from the group, while Rykers and Ward kept the fans guessing, going head to head for second position.

However, it wasn‰Ûªt long before the race lead changed, with Ward shortly snatching away the race lead from Arbon, followed by Rykers in third, and Moss who found his way in to fourth.

It was on lap nine that Moss proved that he‰Ûªs back in business for 2016, making the pass on Arbon and slotting in to third position, relegating Arbon to fourth.

As the first race for the Motul MX2 class reached it‰Ûªs closing stages, the battle for fourth between Arbon and Crawford kept fans on the edge of their seats ‰ÛÒ the pair going head to head for more than five laps.

But when the chequered flag flew it was Ward who crossed the line with the first Motul MX Nationals victory for 2016, taking a comfortable win ahead of National Pump Monster Energy Kawasaki Racing Team‰Ûªs Moss who put on an outstanding comeback performance to finish in second, while Crawford managed to get around both Arbon and Rykers to take the final Motul MX2 podium position (third).

When the Motul MX2 class lined up again after lunch, thousands had streamed through the gates at the Horsham venue, setting the scene for what was an epic final race. 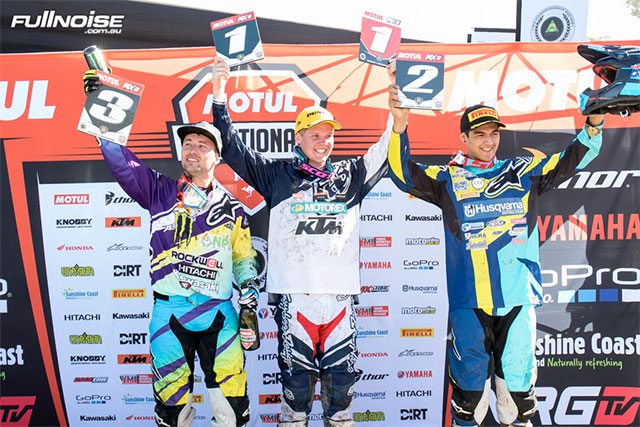 It was Arbon‰Ûªs SD3 Husqvarna machine was once again the bike into turn one first, and after one lap, the South Australian led from fellow Husqvarna rider Crawford, followed by Aaron Tanti.

However, it took no time for Moss to make his way to the front of the pack ‰ÛÒ by lap three the Kawasaki rider had slotted in to third position, forcing Tanti to drop positions.

With the Husqvarna mounted pair of Arbon and Crawford out in front, the focus then shifted to the exciting battle emerging for third position ‰ÛÒ despite Moss making his presence known, he was forced to fight off the hard charging Wilson Todd (Serco Yamaha) whilst DPH‰Ûªs Beaton was also added to the mix.

By the time race two for the Motul MX2 class reached the half way point, Arbon continued to maintain his lead from Crawford in second, while Serco‰Ûªs Todd and DPH Motorsport‰Ûªs Beaton had both managed to make the pass on Moss, relegating the National Pump Monster Energy Kawasaki rider to fifth.

It was Serco‰Ûªs Todd however, who caught the attention of the spectators, shooting up in to second position by lap seven, and beginning to apply the pressure on race leader Arbon. And it was only a matter of laps before the youngster took control of race two, snatching the race lead from Arbon with time to spare, and looking more and more comfortable out in front.

With three minutes remaining, Serco Yamaha‰Ûªs Todd looked more in charge than ever ‰ÛÒ leaving the likes of Arbon, Crawford and Beaton to battle for the final podium positions behind him.

When the chequered flag flew Todd showed that despite being an MX2 rookie, that the pace was no problem, taking the moto two race win ahead of Beaton in second, and Crawford in third.

Both Moss and Ward wrapped up the final race of the day in fourth and fifth places respectively.

When points were tallied however, Ward‰Ûªs fifth place in the final race was all that was required for the overall win, taking the Motul MX2 Round one win ahead of Crawford in second and Moss who rounded out the round one podium in third.