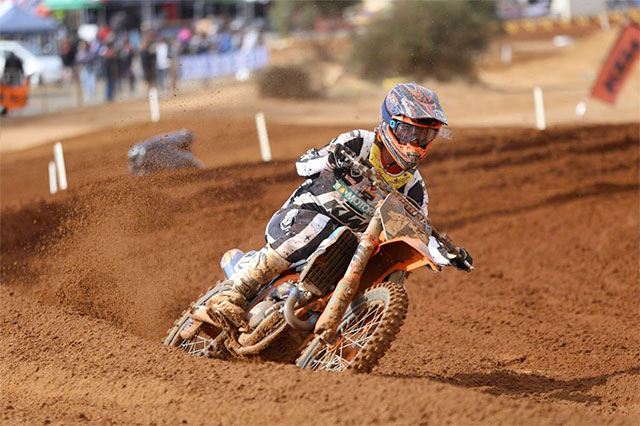 Murray Bridge turned it up for thousands of spectators today, with KTM Motocross Racing Team‰Ûªs Caleb Ward returning to fine form and going undefeated at round four of the Motul MX Nationals.

When the gates dropped on race one, Ward snatched up the first MXStore holeshot for the day, however it was Husqvarna mounted Nathan Crawford who moved in to the race lead ahead of Ward after only two turns. Unfortunately for Serco Yamaha‰Ûªs Wade Hunter, a first turn pile up marked an early end to race one ‰ÛÒ Hunter leaving the track on his feet in the hands of Racesafe.

With three laps in the books Crawford, Ward, red plate holder Beaton (DPH Motorsports) and KTM‰Ûªs Jayden Rykers began to break away from the field putting on an exciting performance for the top positions.

After nine minutes on track, spectators were treated to the battle they had been waiting for, with Ward finally closing in on Crawford and beginning to apply the pressure for first position. While the pair went head to head, Beaton dropped off the pace slightly, but remained comfortable in third position.

By the time the Motul MX2 class had reached the six lap mark, Ward had gained control of moto one, making the move in to the lead and relegating Crawford to second position ahead of Beaton and Rykers.

From there, sand specialist Ward thrived in the Murray Bridge track conditions, stretching out his lead on the field, and ensuring that round four would prove that the bad luck the star experienced at Broadford was behind him.

By the time moto one for the Motul MX2 class had reached the half way mark, Ward continued to lead from Crawford, Beaton, Rykers and Moss. Serco Yamaha‰Ûªs Todd managed to hold down sixth position, while Mitch Norris, Richie Evans, Raceline Pirelli KTM‰Ûªs Dylan Wills and Western Australian Dean Porter rounded out the top ten.

Despite looking comfortable in second position, a small crash from Crawford in the closing stages of the moto forced him to drop a position ‰ÛÒ and despite getting to his feet and continuing to circulate, Ward became untouchable out in front, leading from Beaton while Crawford dropped back to third.

And when the chequered flag flew it was Ward who crossed the finish line victorious, followed by Beaton who wrapped up moto one in second, and Crawford who recovered from his earlier mistake to finish race one in third.

With the Motul MX2 championship tightening up slighting after Ward‰Ûªs moto one victory, when race two kicked off, the pressure was on ‰ÛÒ but it was Moss who rose to the occasion and moved in to the early race lead, while Crawford and Ward followed closely behind.

After only one lap, the running order saw Moss continue to lead from Crawford and Ward, while Dylan Wills held down an impressive fourth position from fellow KTM mounted Porter.

By the time the Motul MX2 class had four laps in the books, fans were treated to an exciting performance from third place holder Ward, who applied significant pressure on Crawford and his Husqvarna machine for a whole lap, before making the pass and moving in to second where he began to eye off Moss.

And there was simply no stopping Ward from there onwards ‰ÛÒ after less than one minute of making the pass on Crawford, the northern Queenslander snatched away the race lead from Moss, which he would then defend to the end.

At the half way mark in moto two, Ward had stretched out his lead on Crawford who had also gotten by Moss, while the former champion also began to come under fire from Porter and championship leader Beaton.

But it was Jed Beaton who was determined to not only make a late charge to the front, but to finish on the Motul MX2 round podium. Beaton then executed a pass on Porter in the front section of the track to move in to fourth position and begin to chase down Moss.

By the time riders received the last lap board in race two, it was clear that Ward was in the box seat to take his second race victory for the day, the crowd providing some extra incentive, cheering him on as he screamed past his fans.

So when the chequered flag flew for the final time today, Ward had plenty of reason to celebrate, taking the race two victory and a clean sweep at Murray Bridge, while Husqvarna mounted Crawford concluded moto two in second followed by Moss who held off Beaton to narrowly take third.

When the points from both motos were tallied, it was Ward who returned to form at Murray Bridge to go undefeated and take the round four victory, while Crawford closed in on Beaton‰Ûªs points lead, finishing the round in second position, followed by Beaton who wrapped up racing today in third overall, and now holds on to the Motul MX2 Championship lead by a single point.

‰ÛÏIt was an awesome day ‰ÛÒ I was feeling really motivated after the bad luck at the last round, and just did everything I could in the last three weeks to train hard and it‰Ûªs worked out well,‰Û