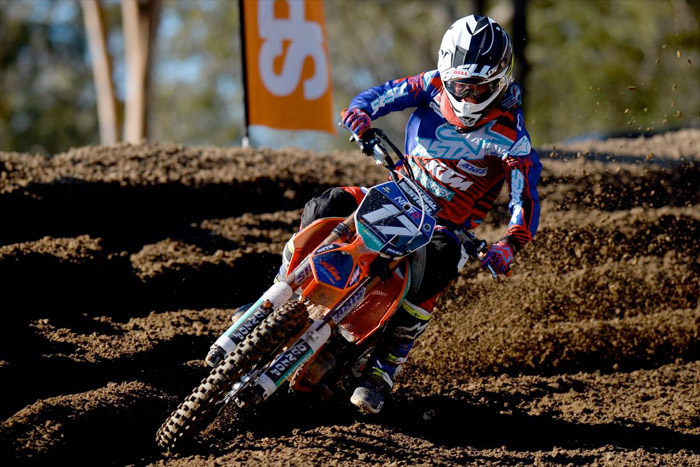 KTM Australia‰Ûªs Caleb Ward has claimed his third consecutive overall win, while JCR Yamaha‰Ûªs Jay Wilson has secured the red plate for the first time this season, at round six of the MX Nationals held at Raymond Terrace on Sunday the 5th of July.

With the round marking the return to the MX Nationals from the mid-season break, the MX2 class basically started fresh, with only five points separating series leader Luke Clout (Serco Yamaha) from his nearest competitors.

Before moto one had even started, Clout was forced in to panic mode, suffering a rear break issue on the start line and unable to switch bikes. With the red plate holder in trouble, the door was left wide open for JCR Yamaha‰Ûªs Wilson to seize the opportunity and take control of the championship.

Despite Geran Stapleton claiming the hole shot in moto one, it was local Newcastle KTM rider Dylan Wills who proved to be the star of the show. After taking the early lead, Wills fought off fellow KTM mounted Ward and Wilson, to eventually claim a career first race win on home turf, ahead of the pair respectively.

With Clout crossing the line in seventh position, JCR Yamaha‰Ûªs Wilson became the new Motul MX2 Championship leader by a single point, and with another race for the day still remaining.

In moto two, it was all about Ward. After narrowly missing the hole shot, Ward went on to launch himself into the race lead, managing to hold the number one position for the entire race.

With Ward checked out, the focus was on the battle behind him. JCR Yamaha‰Ûªs Wilson managing to execute passes on Nick Sutherland, and Luke Arbon to eventually settle in to second position for the remainder of the moto.

When race two concluded, it was Ward who claimed a commanding race win, with Wilson crossing the line in second and Serco Yamaha‰Ûªs Jed Beaton finishing in third.

With results across the board thrown in to disarray, the round six Motul MX2 podium saw Ward on top, followed by new series leader Jay Wilson in second, while third place was awarded to local rider Dylan Wills who finished moto two in 13th.

‰ÛÏI‰Ûªm so pumped to have got this win, we have managed to prove now that we have the speed and can race on different conditions so it feels good,‰Û