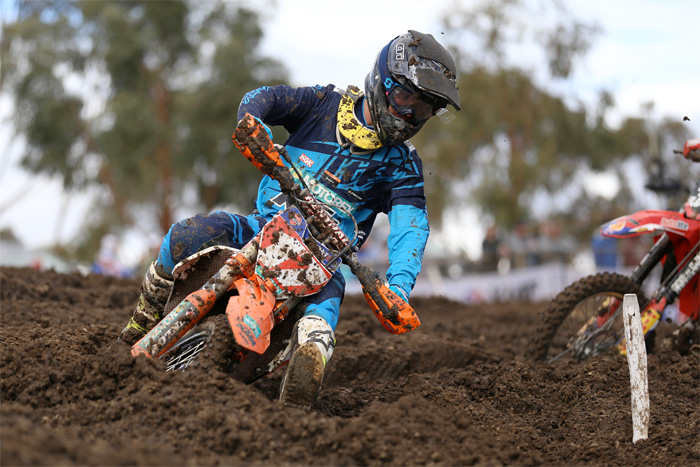 The likeable North Queensland suffered a mystery engine failure while running top six in the first moto, then in the second, he had another rider high side directly in front of him as he had his KTM 250 SX-F in third gear with the taps wide open. Ward crashed heavily but managed to remount and limp home in 15th place, slipping from first to seventh in the championship.

Raceline Pirelli KTM Motocross Racing Team development rider Dylan Wills was the highest-placed KTM rider on the day with sixth, while Jayden Rykers has moved from eighth to sixth to become the highest placed KTM rider in the championship, two points ahead of Ward.

‰ÛÏObviously it was a pretty horrible day, it always can be worse I guess, but I went from having a decent points lead to being 30 points down just due to weather conditions and the track, so obviously that sucks.

"Basically one bad start just wrecked my entire day because everything tumbled downhill from there, there wasn't a lot that I could do about it.

"In the first moto I stuffed up my jump out of the gate and I ended up a fair way back. I was making my way through, but because the track was so muddy, I ended up having a mechanical and DNFed. It was no-one‰Ûªs fault. In the second I had a horrible gate pick - I got a reasonable start but was too far to the inside and got pinched off.

"I was making my way through fairly good and was into sixth or seventh, when Rykers high-sided right in front of me when I was like in third year pinned. I hit his bike and went straight over the handlebars and head first into the ground, which was pretty much like concrete right there. So what should have been a day with two top-five finishes, became a DNF and a 15th.

"A horrible day, but I'm looking forward to the next few rounds and tracks where I've had a bit of success in the past.‰Û