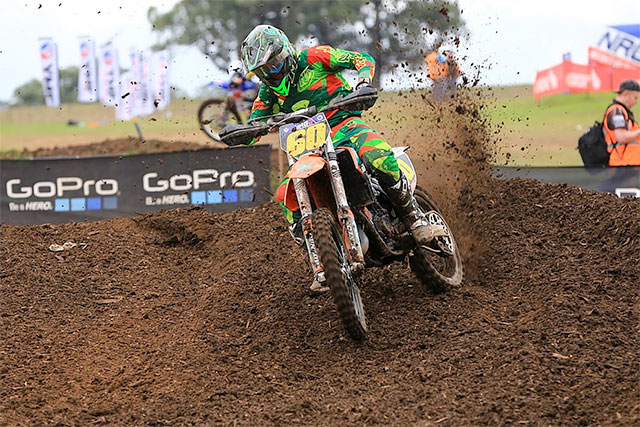 The Yamaha Rising Star Rookies had the rare opportunity to race alongside the country‰Ûªs best at Appin yesterday, with a total of 30 junior 125cc riders taking part in the feature class for Round 2 of the Motul MX Nationals.

The Yamaha Rising Star Rookies were treated to a world class circuit yesterday, and with the youngsters being put through the MX Nationals paces, the class was provided with a brief practice session before heading straight in to qualifying yesterday.

In the closing stages of qualifying it was Callum Norton (Husqvarna) who emerged as the early pace setter, with a 1:51.640 lap time, handing him first pick of the grid. Western Australian KTM Australia rider Caleb Grothues put down the second quickest time (1:51.765), followed by Jake Williams who wrapped up the session in third.

When racing kicked off for the Yamaha Rising Star Rookies, it was Western Australian Grothues who got to the moto one race lead, followed by Riley Dukes, Jack Kukas and Cody Dyce.

By the time there were five laps in the books for the 125cc mounted rookies, no one could get near the hard charging Grothues, while fastest qualifier Norton managed to find his way up in to second position ahead of Dukes.

With five minutes remaining for the class in moto one, the running order saw Grothues out in front, followed by Norton in second, Dukes in third, while Dyce and Kukas held down fourth and fifth places respectively.

Williams, who was third fastest on track during qualifying this morning, was locked in to sixth position, ahead of Jy Roberts, Brodie Ellis, Hayden Matterson and Regan Duffy rounding out the top ten.

At the conclusion of the 15-minute moto, it was Grothues who showcased his talent, taking the race win ahead of Norton who crossed the line in second, while third place was snatched up by youngster Dyce.

When the final race of the day got started for the Yamaha Rising Star Rookies, the youngsters were forced to contend with a track that would test even the most experienced of riders.

After one lap, it was once again Grothues, who got to the early race lead, while Dyce, and Dukes slotted in behind him in second and third positions.

And from there the positions remained relatively unchanged, Grothues taking the race win to remain undefeated at Appin, while Dyce wrapped up the final moto in second, ahead of Norton who fought back to third position after a tough start.

Husqvarna mounted Dukes concluded the final moto for the day in fourth position, while Ellis, Mason Semmens, and Matterson wrapped up the final race of the day in fifth, sixth, and seventh places respectively.

With two race wins to his name, KTM‰Ûªs Grothues showed that despite suffering a horrific injury in 2015, that he‰Ûªs back in fine form, taking the Yamaha Rising Star Rookies round one win at Appin, ahead of Dyce in second, while third spot on the podium and on equal points with Dyce was taken by Norton.

‰ÛÏThe track at Appin was very deep and rough, it was like a Junior Aussie title after a week of racing on it ‰ÛÒ it was crazy, but overall we are very happy to go undefeated!‰Û