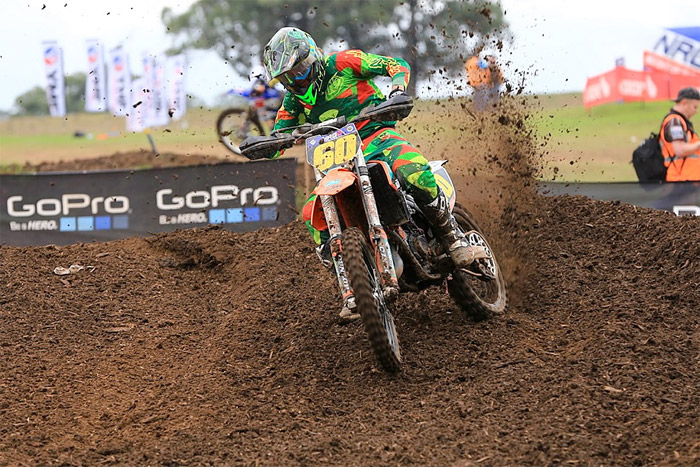 They will be part of a talented young Aussie squad competing in two classes (125cc and 85cc) under the guidance of Team Manager Glenn Macdonald.

Former World Junior Champion Grothues, who spectacularly came second in the 125cc U13-15 category at last year‰Ûªs junior nationals just months after a severe injury in which he lost the outer two fingers on his right hand, is one of three KTM riders in the squad, which comprises Cody Dice, Riley Dukes (reserve), and KTM pair Cody Chittick and Dante Hyam.

Grothues proved he‰Ûªs now back in very hot form when the MX Nationals came to Appin earlier in the year, dominating proceedings in the Rising Star Rookies 125cc class on his KTM 125SX to win from Dyce and Cal Norton, and the sixteen-year-old hopes to make his last junior worlds another memorable one.

"I‰Ûªve done the worlds a few times in the past, so it's good to do it on a bigger bike and hopefully show what I've got." Grothues said. "I think we've got four flights, so there is a lot of travelling.

"Where it is is a bit scary so we‰Ûªve done a bit of a detour and we‰Ûªll get there, so that‰Ûªs the main part. I might be more excited to get out of the place than in! I‰Ûªm hoping for a good result, I've done a lot of training coming up to this since my hand injury, which has gotten better and better with each ride that we do, so that's a plus.

"I‰Ûªll just put 100% in and let the outcome show how hard I tried. It took me a while to get used to it and a long time before I could do a few laps, but we've got a lot of strength back in the hand, and it seems to be working again quite nicely, but I haven't particularly changed anything much in my bike or my riding style.

"But I‰Ûªm back being able to do long motos, so I'm happy with that. At the start it was a bit hard, and at Bunbury it was hard to hang on for a long time, but apart from that it‰Ûªs pretty much exactly the same.

"I'm really excited to have this experience I‰Ûªve never had before and to get the chance to race against other countries." Chittick said. "I‰Ûªve been over to the Loretta Lynn‰Ûªs event before, but there weren't many countries represented there.

"It will be cool to see riders from so many more countries and see what styles they use. Russia looks pretty nice place from the pictures I've seen and it‰Ûªs pretty cool how the track is close to the beach. If I could qualify and make it into the top 30 that would be pretty good I reckon.

NSW rider Hyam was initially a reserve rider on the team, but he got the call to the starting lineup a couple of weeks ago with the withdrawal of Jett Lawrence.

"It's a great honour to go over there and represent my country." Hyam stated. "I've never raced overseas and I can‰Ûªt wait for it.

"I'm not quite sure what to expect but I know that it's going to be the best riders in the world and I‰Ûªm up for the challenge. I‰Ûªve ridden KTMs for quite a while, I used to race a KTM50, and I currently race a KTM85 and KTM125 also. I‰Ûªve been doing a lot of training lately and I probably riding the 85 the best I've ever ridden it.

"I've seen some video and a couple of pictures of the track will be racing at, and I really like the look of it. It looks like it will suit my style a lot, it's fast and open and I can't wait to get over there and ride it.

The KTM boys will ride 2017 model KTM125SX and KTM85SX, and will again enjoy the support of the high-profile German KOSAK KTM team, which has in the past worked with such riders as Jay Marmont, Chad Reed and Bubba Stewart.

"It‰Ûªs great to have Caleb Grothues back after that nasty injury in which he had two of have his fingers severed." Team manager MacDonald said. "I have known him for many years and at World Championship level. You can say it how it is to him and he will rise to the occasion, competition-wise and pressure-wise.

"He is a former world champion, and been on the podium twice so with a bit of luck we‰Ûªll see if we can do the same thing on the 125. He's been steadily on the improve, we saw him win the junior rookies at Appin against some pretty heavy hitters, but obviously the 25+ minute motos will test him out, especially on that track.

"We also have Cody Chittick, who is one of the fairly good punters from out of WA ‰ÛÒ he‰Ûªs done a few stints to the states which is good for his exposure to new tracks and competition, as well as his ability to adapt under pressure. Dante Hyam is also another good young rider from the Central Coast of New South Wales, so it will be great to see what they can do," he concluded.

Top Image: Caleb Grothues is looking forward to showing what he can do in Russia this weekend