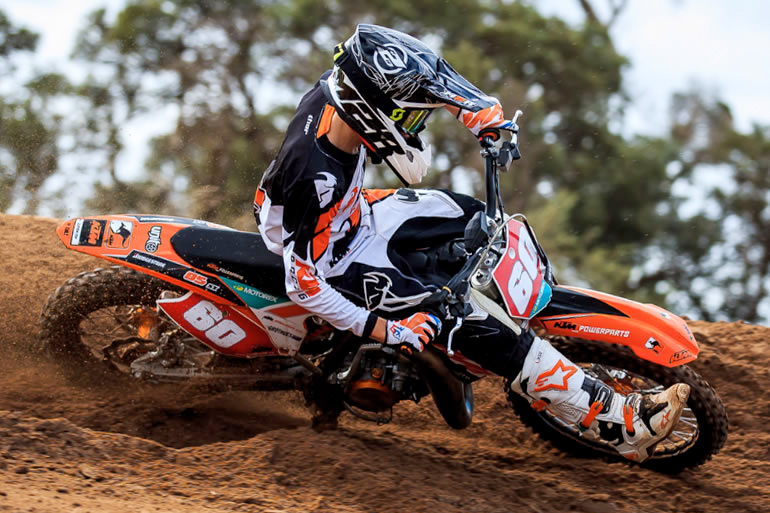 The KTM Junior Motocross Racing Team rider Caleb Grothues is off on the trip of a junior racer‰Ûªs life, after accepting an invitation to compete in this weekend‰Ûªs Monster Energy Supercross at Sam Boyd Stadium Las Vegas.

The 14-year-old will compete in the same event as some of the very biggest names in the world - despite the fact that he's only started riding on supercross tracks and competing in the more compressed form of the sport in 2014.

Grothues, who won his fourth Australian junior motocross title a little over a week ago, left for the United States on Tuesday for the big money, stand-alone event which takes place Saturday evening.

Grothues will contest the Super Mini Class - a class not contested in Australia ‰ÛÒ on a KTM85 big-wheel fitted with a 105cc barrel, but the Perth native got the chance to spend some time practising on a kitted bike at home in order to familiarise himself with the power spread.

His shakedown came at last weekend's Bathurst Supercross, where Grothues raced the 105cc kitted KTM to fourth against the 250cc 4-stroke mounted juniors

‰ÛÏI've been to the states quite a few times since 2008 and it was meant to be that the top 10 from Loretta Lynn's got an invite, but we never got one so we called up and queried it, and got told that we were on the reserve list, so we kept training for the Aussie nationals and expected that it wasn‰Ûªt going to happen." Grothues explained.

"Just after the nationals, Dad got a call to say that we got in, so I was super-pumped.

"Dad set up a Super Mini for me to ride so I could start training with one as soon as we got finished with the Nationals. So I have been training really hard on that, and we just did Bathurst Supercross, so I got some good some good race practice out of that one.

"Growing up I always watched Supercross whenever I could, and being able to go to the Monster Cup, which was my favourite one, is absolutely amazing to me. Especially to be able to race on the same night as the bigger bikes, in a big stadium and on a great track.

"It's going to be a real stacked field this year, and everyone's on new teams, so it will be exciting!‰Û