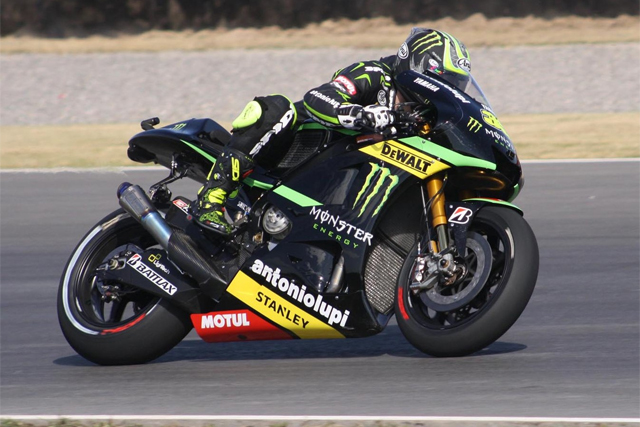 Monster Yamaha Tech 3 Team rider Cal Crutchlow took centre stage in a historic moment for South American motorsport, when he became one of the first to ride a prototype MotoGP machine on the impressive new Autodromo Termas de Rio Hondo track in Argentina.

Crutchlow completed 29-laps in the pre-lunch session on the first of a two-day test on the super-fast 4.8km track, which is part of a special promotional tour in anticipation of the Autodromo Termas de Rio Hondo track featuring on the 2014 MotoGP World Championship schedule.

Booming interest in MotoGP in Argentina was evident again today after fans, media and officials gave Crutchlow a warm and enthusiastic reception on his arrival into Buenos Aires on Tuesday.

A large and passionate crowd gathered to witness Crutchlow put his Monster Yamaha Tech 3 Team YZR-M1 through its paces on the new circuit, which features 14 fast and technical corners.

As well as giving Argentinian fans a small taste of the high-speed and adrenaline-fuelled action they can expect next year, Crutchlow is on a vitally important data-gathering mission for Yamaha and Bridgestone.

The former World Supersport champion is scheduled to test a wide selection of tyres for Bridgestone, his comprehensive feedback giving the Japanese tyre firm precious information that will be used to help develop the tyre allocation for next year‰Ûªs race.

‰ÛÏWe have had an absolutely fantastic welcome in Argentina and after seeing the enthusiasm for MotoGP I‰Ûªm really happy to be finally out on track to demonstrate what a spectacle the fans will see next year." Crutchlow stated. "The new track is very impressive and it is a really a good facility that Argentina can be very proud of.

"The track is still very dirty, so we are just enjoying riding around and learning as much as possible while also feeling the emotion of being one of the first ever to ride a prototype MotoGP bike here.

"It's incredible how many spectators came to welcome us and see us riding. Hopefully we can put on a good show next year and have a fantastic race because it certainly looks like it will take place in front of a huge crowd.

"The track has a good mix of long and fast corners and some are tight, so it is very important to get into a good rhythm. I really like Turn 6, which is a long and downhill corner.

"That is really cool to ride and I think the whole of the MotoGP grid is going to come here and love the track," the British rider concluded.

Next year‰Ûªs race will be the first time the sports-mad South American nation has played host to MotoGP since 1999.