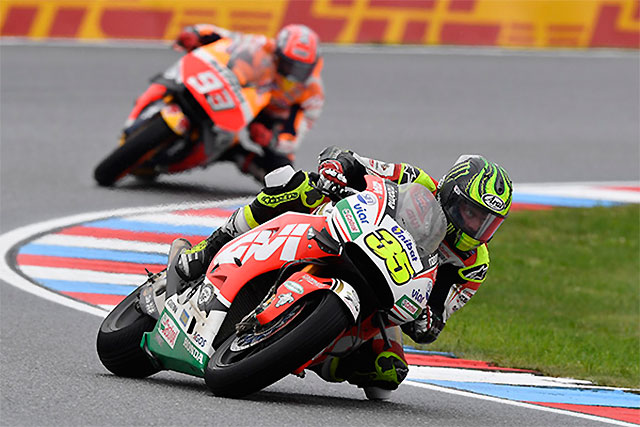 Cal Crutchlow was peerless in the treacherous conditions at the Grand Prix of the Czech Republic, as he took his and the LCR Honda Team‰Ûªs first-ever victory in the MotoGP class.

In doing so, he became the first British rider in 35 years to seal a premier class win ‰ÛÒ ever since Barry Sheene ran out victorious in the Swedish GP of 1981.

Like Crutchlow Valentino Rossi came from way down the field to take second ahead of championship leader Marc Marquez in third. 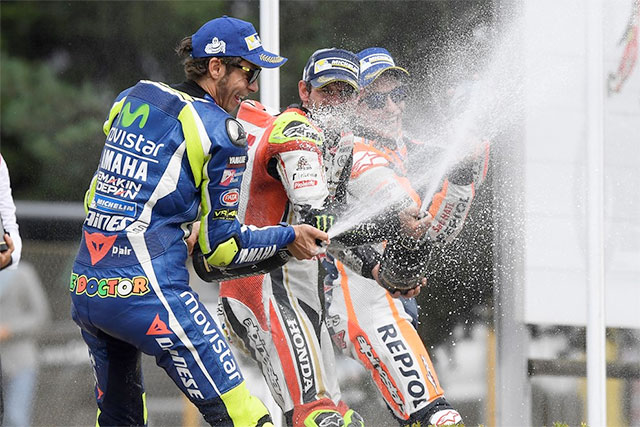 The MotoGP Brno podium
The historic day came amidst tricky weather at the Brno circuit, with rain falling all day but stopping just before the MotoGP race. Crutchlow and his LCR Honda Team took the gamble of fitting a hard wet tyre to the front and rear of his bike, only one of two riders to do so, and despite having taken time to get up to pace, it soon became the combination to be on.

Having started in tenth place on the grid, Crutchlow was down to 15th by the end of lap three, but he was soon on the move, passing riders at will before hitting the front with just over seven laps remaining. The Brit never looked in trouble, and came across the line with a huge stand-up wheelie to celebrate, over seven-seconds clear of his nearest challenger, Valentino Rossi.

Crutchlow‰Ûªs win comes at a fitting moment, just two weeks after the birth of his first child Willow, and two weeks before the next round of the MotoGP World Championship, at Silverstone in the UK.

‰ÛÏThis win means a lot to me. I thought the feeling might be different, but after having become a Dad two weeks ago, nothing matches that. Don‰Ûªt get me wrong though, I haven‰Ûªt won a race for many years, maybe six or seven, so it‰Ûªs been a long time and it‰Ûªs something really, really special.‰Û 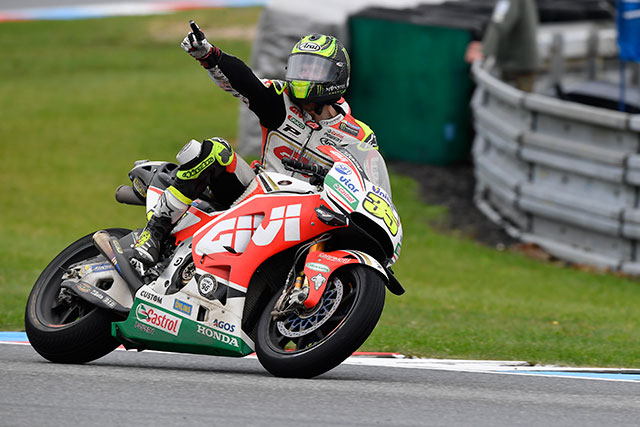 Cal Crutchlow took his first win and the first for GB in 35 years, since Barry Sheene.
‰ÛÏI‰Ûªm pleased to be the British rider that‰Ûªs broken the run, especially after some of the stick I‰Ûªve had, Crutchlow said. "I‰Ûªm also so pleased for my LCR Honda Team, because I wrecked a bike during practice yesterday and they were working until midnight to get it ready for me today. So to repay them with this win is great ‰ÛÒ they never give up.‰Û 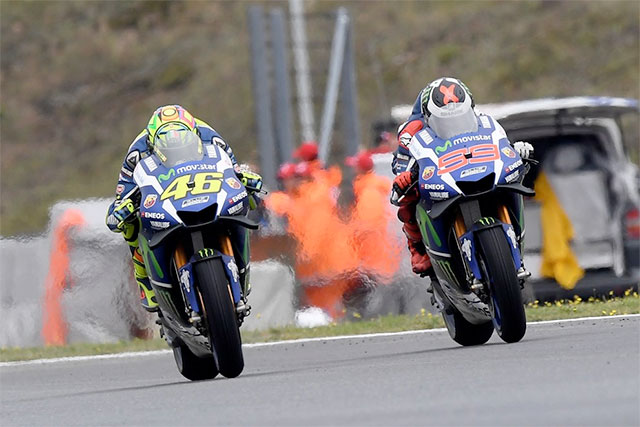 Valentino Rossi lapped his team-mate Jorge Lorenzo after the Spaniards tyres completely let go.
After waiting seven laps for his harder spec tyre to get up to temperature, The Doctor knew it was time to put the hammer down. He had to let Cal Crutchlow go in front and followed him to Pedrosa, Bradley Smith and Pol Espargaro, who he passed with 14 laps to go. A lap later Rossi gained a position as Andrea Dovizioso suffered a technical problem. The Italian kept following Crutchlow and continued to work his way past Danilo Petrucci and Maverick ViÌ±ales, as Aleix EspagarÌ_ retired from the race, and then set his sights on Marc Marquez in fifth place, overtaking him with seven laps to go.

Riding as the fastest man on track the nine times World Champion passed Hector Barbera a lap later and had the crowds cheering as he wrestled second place from Andrea Iannone. Rossi then quickly took off, creating a distance between himself and the Italian, but soon realised that the margin between him and the now leading Crutchlow had grown too large to close in the last four laps. The Doctor decided to settle for second place, finishing 7.298s from first and taking twenty points for the championship.

"At the beginning I was desperate because I thought we made a mistake, but lap by lap the hard rear became better and it was a very long race, you have to stay concentrated not to make a mistake," Rossi explained. "I started from p12, so it was a great race and I'm happy with these 20 points, also because I'm second in the championship and I think today we did a good job and we made the right choice." 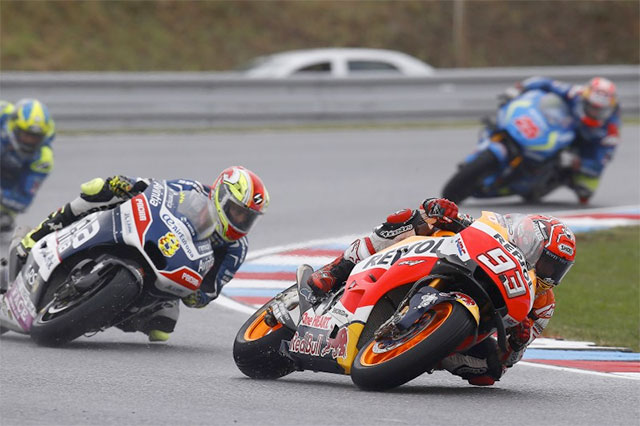 Marc Marquez was the best of the soft tyre runners with third
Marc Marquez was the only rider on the podium who raced on both the softer rain tyres option. After crossing the line in first at the end of lap one, Marc had to give way to four Ducatis charging from behind, but he managed to control the gap and not loose too much ground. He was also careful to manage his tyre wear by choosing the wetter lines, and after Crutchlow and Valentino Rossi also passed him, he was able to overtake Andrea Iannone and Hector Barbera and take third.

‰ÛÏI‰Ûªm happy with the end result because the most important thing is that today I extended my advantage over second in the overall standings, as I only dropped four points to Valentino [Rossi] while Jorge [Lorenzo] didn‰Ûªt score points," Marquez said.

"We proved that we‰Ûªre competitive both in dry and wet conditions. This year we‰Ûªre working like ants, making gradual, steady improvements and having a very complete season without changing our mindset. I made a mistake with the tyres choice, but it‰Ûªs easier to judge things in hindsight.‰Û 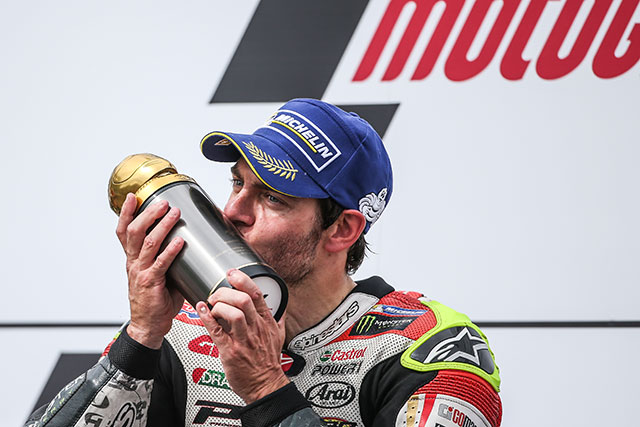 Lorenzo fell backwards through the field in the early laps like teammate Rossi, and when he got back on the pace proved to be one of the fastest out there - also like teammate Rossi. With 7 laps to go the 'Spartan' then seemed to make the shocking decision to come into the pits to change bikes, but later revealed the front tyre on the first bike was unridable. The Mallorcan headed back out in the race for a number of laps on the second bike in order to not retire, before switching back to his first machine with different front rubber and trying to salvage a better finish.

The next round is at Silverstone, as Crutchlow heads back to his home track for the British GP.