Cairoli and Prado take the silverware at Italian Championship opener 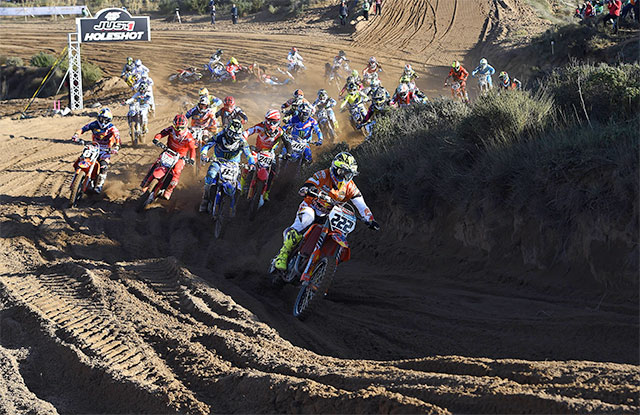 Red Bull KTM Factory Racing Team celebrated a powerful return to Motocross racing on Sunday at the opening round of the pre-season International Italian Championship.

The MX1 class saw a renaissance ride by the team‰Ûªs Tony Cairoli who took a decisive win on the soft sand of Riola Sardo (Sardinia), only to repeat it again in the Elite race. Young Spanish teammate Jorge Prado took an impressive win in the MX2 race and was the class overall winner at the end of the day.

"I‰Ûªm very happy because we now start to adjust the bike to suit my riding style and we‰Ûªve done a lot of testing, which wasn‰Ûªt possible last year because of my crash," Cairoli explained.

"Now I am more at peace with the bike so I can express myself better. The last two years we struggled a bit with the starts, but it sees now I‰Ûªm pretty fast right from the first race. This was a sand race and that's easy for me, so it will be interesting to see what its like on the hard pack at Malagrotta. That‰Ûªs our home track and I know it well. But they always prepare it very well so it will be different on race day.

"Here we missed Jeffrey Herlings because he‰Ûªs one of the best in the sand and it would have been interesting to race against him on this track. Hopefully he will be back soon and we can all race together again. There were a lot of GP riders here so it was a very good test," Cairoli concluded.

Jeffrey Herlings, who moves up to the premier class and the KTM 450 SX-F after again winning the MX2 title last season, decided to sit out the first race to rest a sprained wrist. 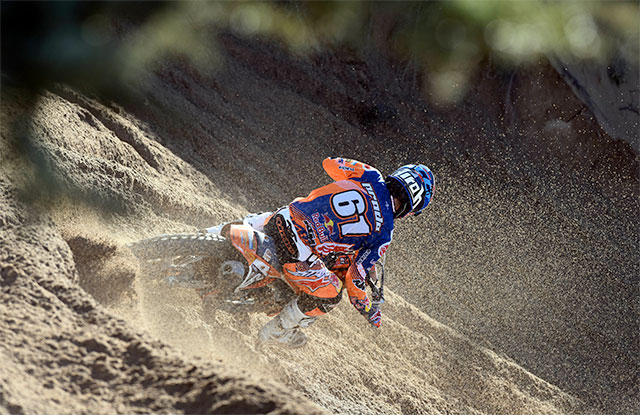 Jorge Prado took out the MX2 class to give the Red Bull KTM Factory Racing Team the double: Photo: Stefano Taglioni
After such a solid win in the MX2 class Jorge Prado admitted to having some difficulties in the elite race when he had a nosebleed in the third lap, but he was justifiably happy with his weekend.

‰ÛÏI managed to get the holeshot in the first race and I was out front all the way," Prado said. "I had some pressure from Paturel who was coming up behind me in the last part of the race but I just gave it everything I had and I took the overall win in the MX2 class. I also started not so bad in the Elite race and I was riding behind Pauls (Jonass) but then in the third lap my nose started to bleed and I lost a bit of concentration, also the sun was getting very low and that made me a bit uncomfortable on the bike.‰Û