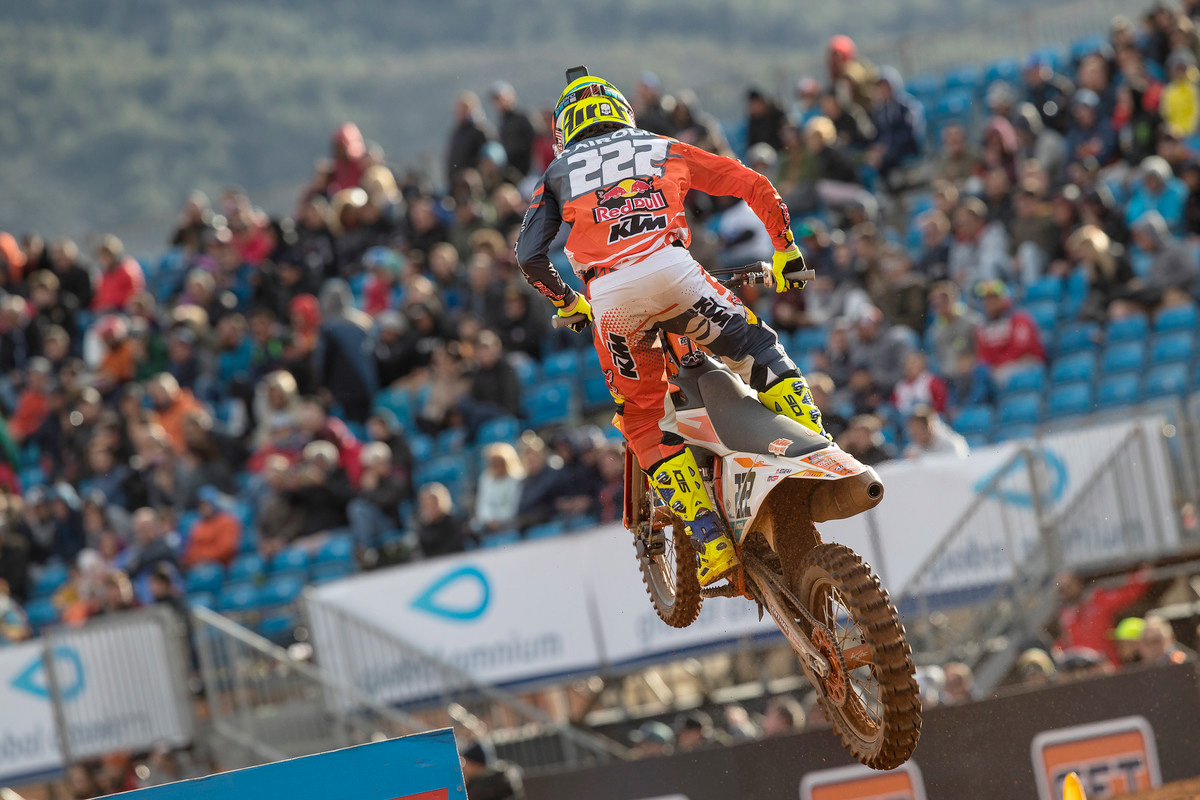 Toni Cairoli took both wins in Spain and is now tied on points with team-mate Jeffrey Herlings in the MXGP championship lead. Photo: Ray Archer
A busy and immaculate Redsand MX Park hosted the third round of twenty in the 2018 FIM Motocross World Championship and Red Bull KTM Factory Racing remain undefeated in terms of both motos and Grands Prix with Tony Cairoli taking his first spoils of the year In MXGP and Pauls Jonass ruling MX2 once more.

Watched by 26,000 fans Cairoli was in the mood for full points following runner-up positions in both Argentina and Holland. The Sicilian stalked Romain Febvre for seven laps of the first moto and crossed the line almost five seconds in front of Red Bull KTM Factory Racing teammate and championship leader Jeffrey Herlings.


In the second outing #222 seized the holeshot. He passed Gautier Paulin and massaged a race-winning margin over a battling Herlings to record his first 1-1 of the campaign. The Grand Prix of La Comunitat Valenciana delivered the defending number one‰Ûªs 84th career success and 300th top three moto finish. Cairoli‰Ûªs achievement also ensured at least one victory in all fifteen of his world championship seasons since 2004.

‰ÛÏI‰Ûªm really happy about the weekend. We made some changes to the bike for improvement and I was very pleased to get back from a bad start to second on the first lap of the first moto," Cairoli said.

"I struggled a bit to pass Romain. I had the better speed but took a while to make it happen. It was good to win. A holeshot in the second moto and Paulin was aggressive and with a good rhythm but I could pass him and control the situation. I knew Jeffrey was coming back strong but we could respond with some good lap-times. Everything went well and I‰Ûªm really happy to win here in Spain. It is my 84th win; it‰Ûªs really nice and the season is going good. I‰Ûªm happy to fight with Jeffrey and the other guys. The red plate doesn't matter too much at the moment. It is about trying to improve and we are trying different things but we have a good set-up.‰Û 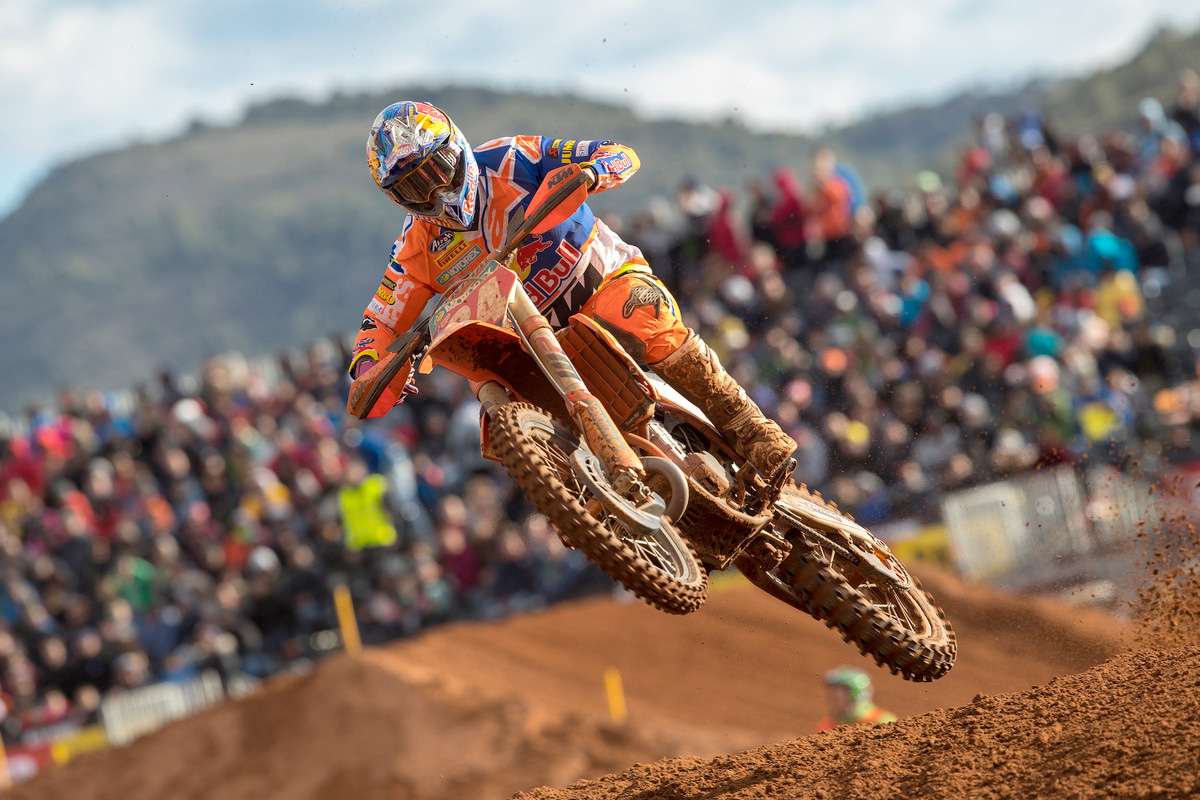 Jeffrey Herlings was not happy with his starts but a score card of two second places was still good for the championship race. Credit: Ray Archer.
Jeffrey Herlings went 2-2 and lamented a poor start in the first moto and a first lap tumble in the second. The Dutchman had a tough day cutting through the pack ‰ÛÒ setting the fastest lap both times - but the victor of Argentine and Dutch rounds secured a third consecutive trophy and ties on points with Cairoli at the tip of MXGP. Despite the same number of triumphs and second places the FIM have given the red plate to Cairoli for round four by virtue of his status as the most recent winner.

‰ÛÏIt wasn't a good weekend and I came to this track aiming to win but I messed up both starts; the second one wasn't too bad but I crashed on the first lap and had to come back from somewhere around fifteenth and was still able to fight my way up to Tony," Herlings explained.

"The bike we have is really solid but we might have some new parts to try for the starts and hopefully we can improve with that. Once the starts are better ‰ÛÒ and I also need to look at what I am doing on the bike - then we‰Ûªll be able to put ourselves in a much better position. The competition is strong here and it is tough to come through the pack; every weekend has been like this and I either barely make it or run out of time. I have a great team behind me and we‰Ûªll be working on it in the coming weeks.‰Û 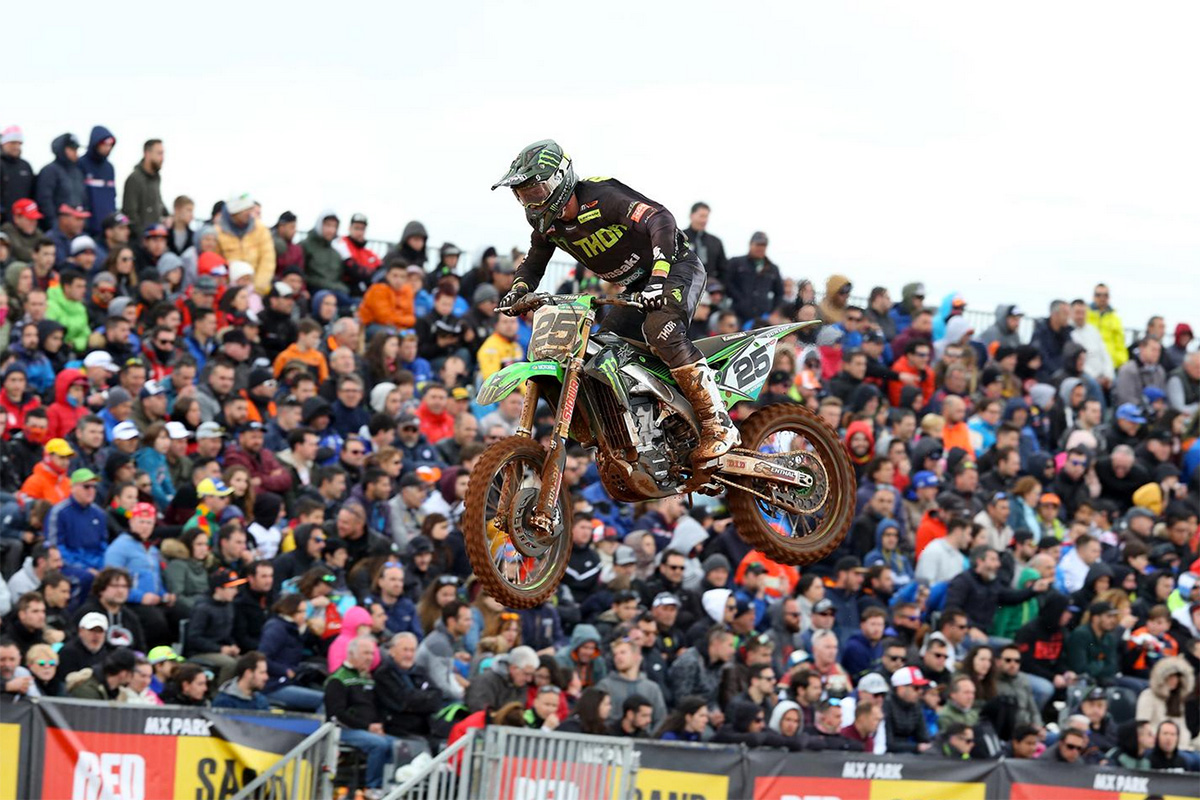 The Belgian turned round a disappointing performance in qualification around in a confidence-building performance as he raced in the leading group in both point-scoring races. A pair of fourths saw him tie with Romain Febvre for the final podium place but his better finish iin the second moto was sufficient to claim third overall on the day and strengthen his third place in the series standings.

‰ÛÏIt‰Ûªs positive to get this podium, as yesterday the feeling was not so good," Desalle said. "We changed our strategy for today and that helped me a lot, especially for the starts; if you don‰Ûªt get a good start it‰Ûªs difficult to get a good result as the class is really competitive.

"I‰Ûªm happy as I got a good start in race one and I was fighting all race to finish in fourth place; my second start was not quite so good but I had a good feeling and made many strong passes during the first two laps to come back to third. I again finished fourth; I had a strong battle with Febvre for most of the race but he couldn‰Ûªt pass me and it‰Ûªs good to have a second podium since the beginning of the season. Now we will continue to work hard; third is good but my goal is to win.‰Û 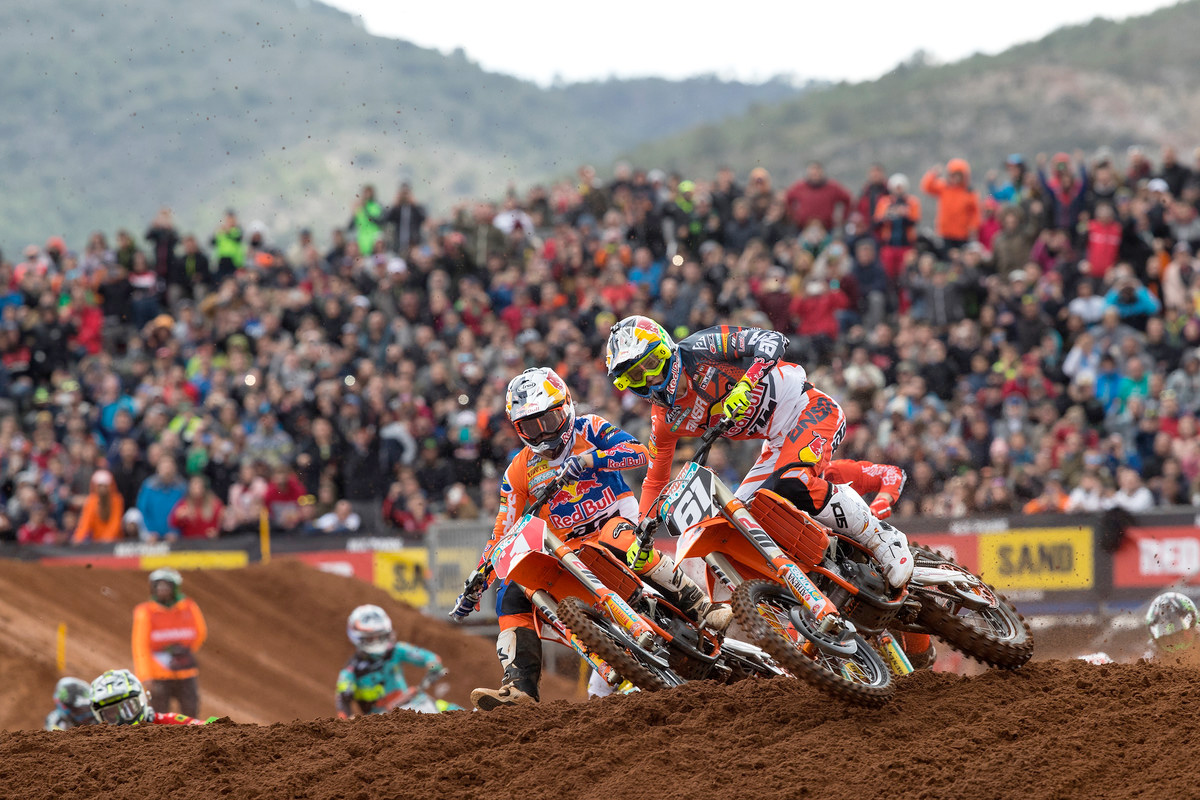 Jorge Prado (61) leads eventual MX2 GP winner Pauls Jonass off the start at the Spanish MXGP. Credit: Ray Archer
While the MXGP class is full of biggest stars in World Motocross the local fans were cheering the loudest during the MX2 class. The Red Bull KTM Factory Racing Team's Pauls Jonass was the winner but his young teammate from Spain, Jorge Prado, was the focus of the fans.

Race one started with a FOX Holeshot from STC Racing Husqvarna‰Ûªs Henry Jacobi who barely surpassed Hitachi KTM UK‰Ûªs Conrad Mewse to the chalk line. Right behind the pair was Jonass who quickly took over the lead.

Prado had a good start as well in 4th after the first lap just ahead of Honda 114 Motorsport‰Ûªs Hunter Lawrence. TM Factory Racing‰Ûªs Samuele Bernardini passed Lawrence for 5th on lap 2 and 2 laps later both himself and Lawrence overtook Jacobi. Lawrence also moved into 4th ahead of Bernardini in the process. Thomas Kjer Olsen was next to take a spot from the TM rider and five laps later Olsen would do the same to Lawrence.

With Olsen pressuring Prado both the Spaniard and Dane found the speed to pass Mewse for second only two laps before the finish. At the line Jonass won with Prado, Olsen, Mewse, and Lawrence rounding out the top 5. 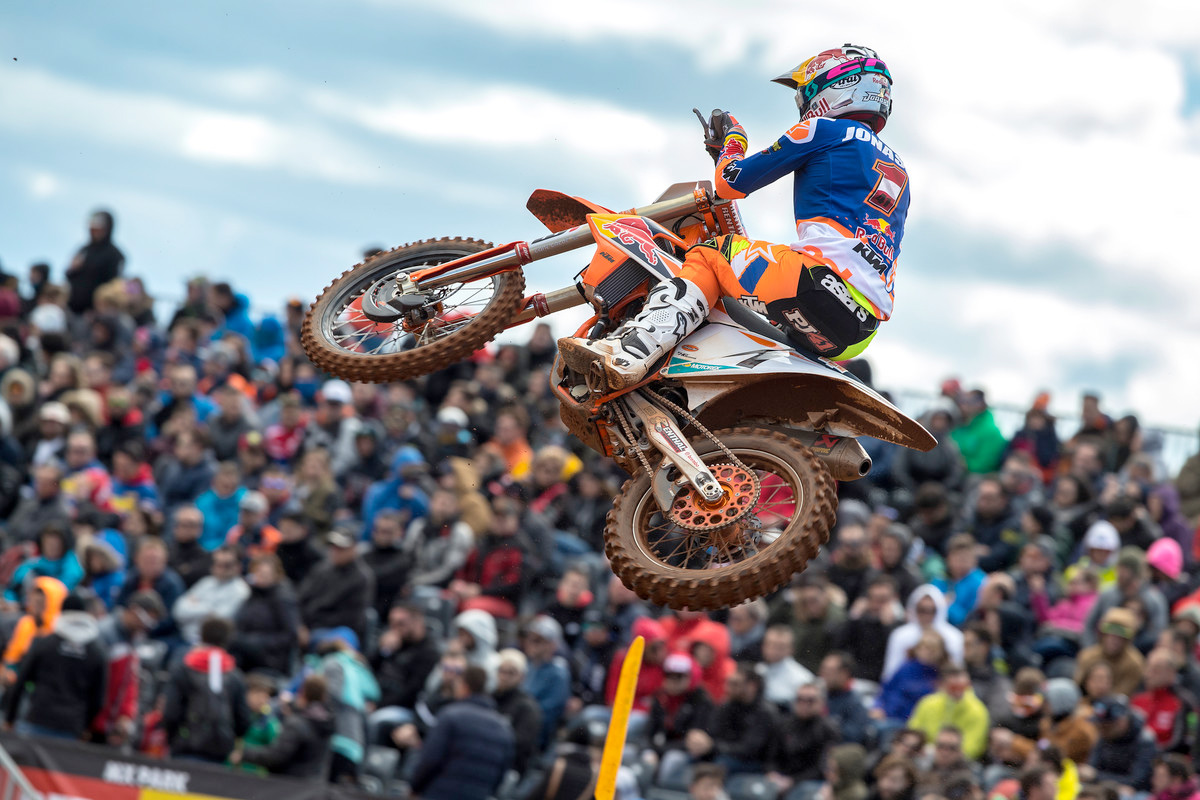 Pauls Jonass has gone undefeated in 2018 and now has a 30 point lead over Thomas Kjer Olsen in the MX2 Championship standings. Credit: Ray Archer
Race two started with a Fox Holeshot from the local superstar but again Jonass took the lead nearly instantly. Olsen had a much improved start for race two and also passed Prado before the first lap was complete.

Darian Sanayei was fast all weekend and after coming from 13th to finish 6th in race 1 the American started race 2 in 4th after lap 1 with Lawrence behind him.

In the 8 laps of race 2 the top seven remained the same but on lap 9 a mistake from Olsen and pass from Sanayei on Prado put Sanayei second and Olsen 5th with Prado and Lawrence between them.

After 3 more laps Olsen had refocused and passed Lawrence for 4th. In the remaining 7 laps again no position changes occurred in the top 6 but Sanayei made several attempts at the lead.

At the finish Jonass won his 6th race of 6 this year for his 3rd overall victory, with Sanayei, Prado, Olsen, and Lawrence finishing the top 5. In the overall standings Jonass scored the perfect 50 points ahead of Prado with 42 and Olsen with 38 for his 3rd podium of 2018.

With a perfect score Jonass has a 30 point advantage in the standings over Olsen. Prado is 3rd and another 15 points back.

"It is nice to start the season with six wins from six motos but motocross is never easy!" Jonass said, "Many people at home have been saying ‰Û÷that looked like an easy race for you‰Û_‰Ûª but every moto is difficult. You need to stay focussed. This weekend was not easy because Jorge was there in the first moto all the time and in the second Darian, Jorge and Thomas were close! I tried not to make any big mistakes and stayed calm to control the race. I enjoyed the track today.‰Û 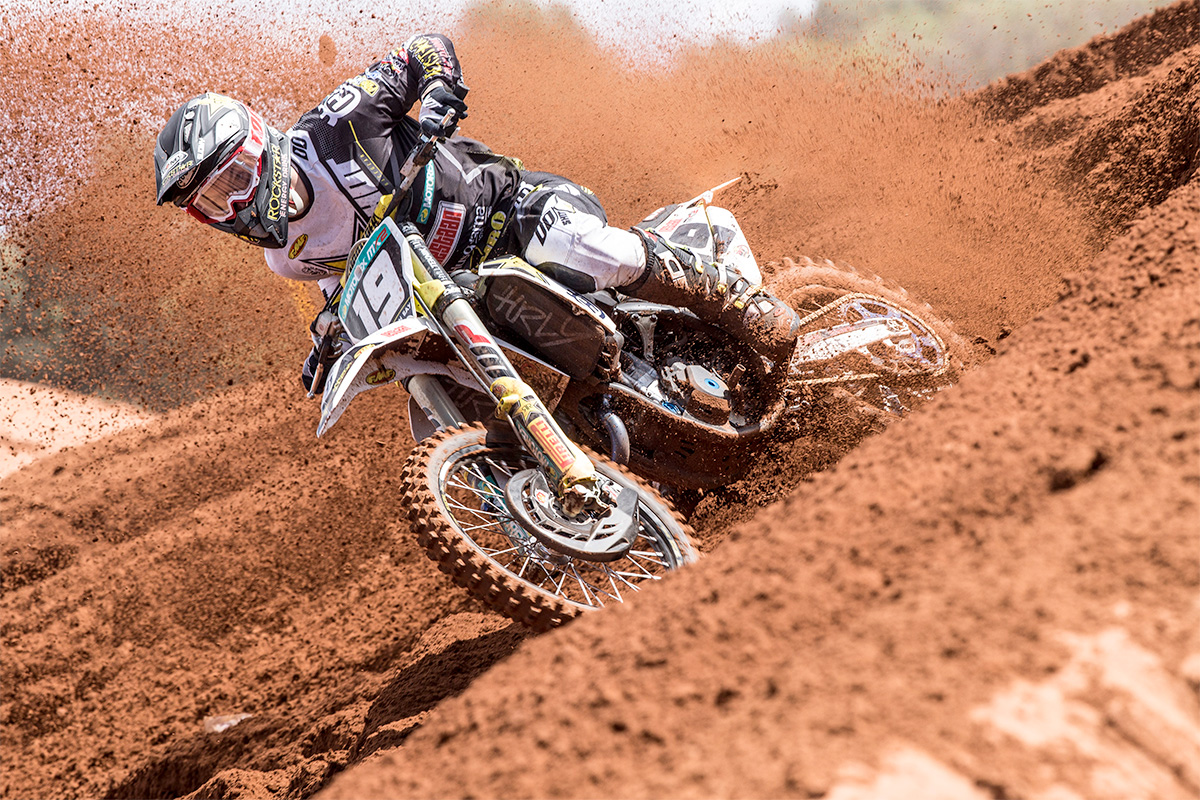 ‰ÛÏIt was a good weekend and I am happy with my second place," Prado said. "The first moto was good, the second I struggled a bit but we‰Ûªve been working hard so I‰Ûªm pleased. For sure everybody wants to win here and Pauls is difficult to beat! Lately he has been riding even better than usual. So we‰Ûªll keep trying!‰Û