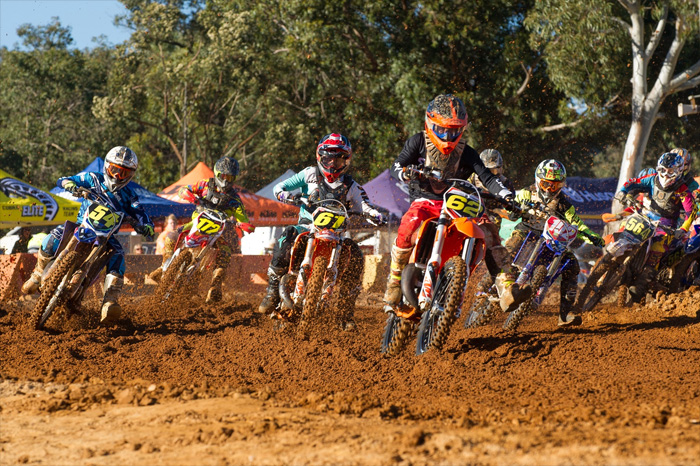 Byford turned it on for the third round of the Make Smoking History WAMX Junior State Championships, on Sunday June 28th.

A brilliant Perth winter day with sun and blue skies and a track that was well prepared and rated as fast by the riders to ensure a top day for racing hosted by the Lightweight Motorcycle Club, which was well attended by spectators as the day went on.

Kayden Minear maintains the series lead in the 50cc Auto class after taking the top step of the podium (2-1-2) from Cohen Guyatt in second after his (3-2-3) results and Taj Moore picking up third for the day by one point from Seth Clark who still holds down second in the championships from Moore, Deacon Paice and Jake Rumens. The points chase will be tight now for the remaining three rounds

The 65cc class have been combined and scored separately this season, and the racing between the classes has been sensational. It was a day of mixed results in the 7-U10 years with Seth Clark taking the round win (2-2-1) from Jake Harvey and Jaylee Rimbas third overall. Series leader Tylar Soloman holds the top of the leader‰Ûªs board salvaging fourth for the day ahead of Cobey Brown who finished in fifth. Soloman holds the championship lead from Jake Harvey and Seth Clark in third position in the series.

In the older age group 10-12 Years Liam Atkinson had a perfect scorecard (1-1-1) securing the round win from Seth Manuel and Cody Chittick. Myles Gilmore, Kaj Radcliffe, Bailey Smith, Jack Doyle and Jordan Scoby-Smith were all in contention for the day.

Atkinson holds the series lead from Cody Chittick and Seth Manuel with Gilmore and Radcliffe rounding out the top five.

85/150ccåÊ 9-12 years class had Liam Atkinson take over the series leader as a result of his round win (1-1-1) with Seth Manuel finishing second and Cody Chittick taking the third step of the podium. Myles Gilmore had a consistent day and Evan Browne used his home track advantage to pick up some strong results from Jake Minear and Bailey Smith.

Cody Chittick now sits 15 points behind Liam Atkinson in second in the standings with Seth Manuel, Jake Minear and Evan Browne in fourth and fifth respectively.

Riley Stephens, Jai Gimenez, Jack Court and Sam Baxter will be the riders to keep an eye on heading into the next hardpacked round at Chidlow next month.

100/125cc 13-15 years continued to deliver close bar to bar racing with Billy Middleton taking the round win from Mat Fabry and Mitch Outram. Kai Stephen and Kurt Oinn battled with Kyle Gillespie and Jeffrey Head who, was the surprise package for the day recording strong results.

Despite finishing third for the day, Mitch Outram maintains a 15 point lead in the championship from Billy Middleton in second and Mat Fabry in third. Kurt Oinn and Austin Ridley make up the top five positions.

In the older age group, 100/125 cc 15 Years,åÊ Justin Hart (1-1-1) continued his dominance with another three outstanding motos where he was able to carry an average 58 second lead and be able to lap back to tenth position.

Matt Fabry picked up second ahead of his team mate Kai Stephen finishing on the third step of the podium for the day at Byford. Billy Middleton, Jonathon Hartley and Kurt Oinn . The results now have Hart back as the series leader ahead of Doutch and Hartley with Tom West, Ryder Smith, Cody Heggs, Dylan Hennessey all recording mixed results yet keeping their positions inside the top ten.

The 128-150cc/250cc Justin Hart (1-1-1) continued his dominance with another three outstanding motos where he was able to carry an average 58 second lead and be able to lap back to tenth position. Matt Fabry picked up second ahead of his team mate Kai Stephen finishing on the third step of the podium for the day at Byford.

Billy Middleton, Jonathon Hartley and Kurt Oinn maintained their consistent form with Cory Perkin, Justin Walker, Jake Woods and Cory Woodhead keeping in amongst the points across the day. The results now have Justin Hart 48 points clear of Mat Fabry and Jonathon Hartley with Kai Stephen and Billy Middleton holding down positions inside the top five.

Round 4 heads to the last hardpacked surface of the round at Chidlow on July 19th.

Full series results can be found at www.mylaps.com, More information on WAMX Facebook Page, and online at www.wamx.com.au