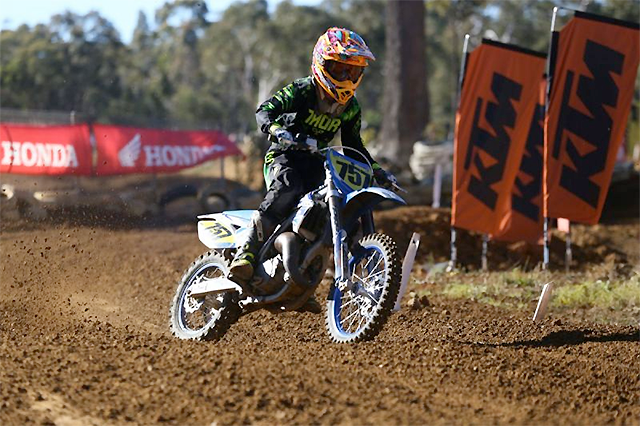 For the first and only time this season the Yamaha 85cc Cup class which fields competitors from 9-12 years or age had the rare opportunity to line up on a national spec track at Round 6 of the Motul MX Nationals at Nowra yesterday.

With Junior categories featuring at numerous rounds of the Motul MX Nationals so far this season, it was the 85cc Cup class‰Ûªs time to hit the track at Nowra yesterday, with Burgess-Stevens showcasing plenty of talent across two exciting motos.

In the 85cc qualifying session GYTR Yamaha‰Ûªs Ryder Kingsford topped the time sheets and secured first pick of the grid with a 2:01.395 lap time. Second fastest was Connor Towill (KTM), while Cambell Williams (KTM) wrapped up the timed session in third.

When race one kicked off, the youngsters were treated to conditions that could only be described as ‰Û÷pro level challenging‰Ûª. Having had three motos from the championship classes already yesterday morning, the 85cc Cup category had their work cut out for them in their first race of the season. 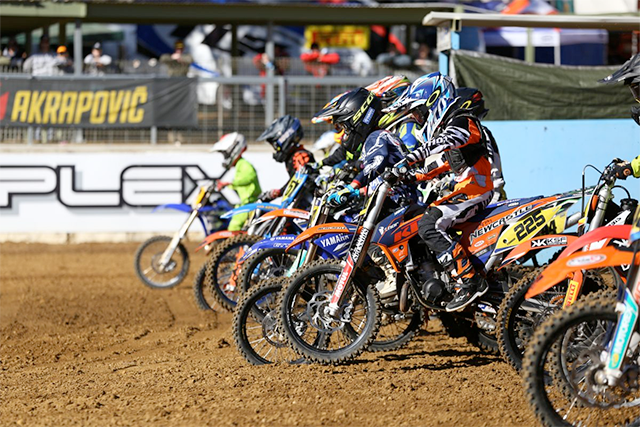 The Yamaha 85cc Cup class blast out of the gate. Credit: MXN Images
It was fastest qualifier Kingsford who impressed in race one on Sunday, leading from the gate drop all the way to the chequered flag aboard his GYTR Yamaha. Second place was awarded to TM mounted Burgess-Stevens, while Towill wrapped up the first 15 minute moto for the 85cc category in third. Cambell Williams impressed in his first race finishing in an impressive fourth, while Brodie Petschauer completed the top five. Mason Hills, Koby Hantis, Cooper Dudley, Nate Thompson and Jack Bates finished race one for the Yamaha 85cc Cup class inside the top ten.

Moto two for the 85cc Cup class marked the final race at Round 6, and given that, competitors were faced with the toughest track conditions of the day.

But one rider who adapted to the rough surface like a pro was Burgess-Stevens. The TM rider battled hard with Yamaha‰Ûªs Kingsford to eventually cross the line victorious. GYTR Yamaha rider Kingsford concluded race two in second, followed by KTM mounted Towill who finished the final race of Round 6 in third. Dudley and Williams wrapped up race two in fourth and fifth places respectively, while Petschauer, Thompson, Hills, Hantis and young Seth Burchell completed the top ten.

Despite both Kingsford and Burgess-Stevens finishing on equal points after two epic races at Nowra, it was the TM rider Burgess-Stevens who was awarded the Yamaha 85cc Cup victory thanks to a countback. Second spot on the podium went to Kingsford, while two third place finishes saw Towill awarded with third place at Nowra. 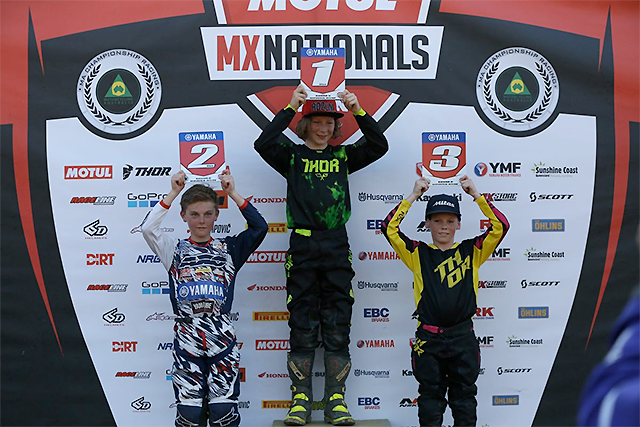