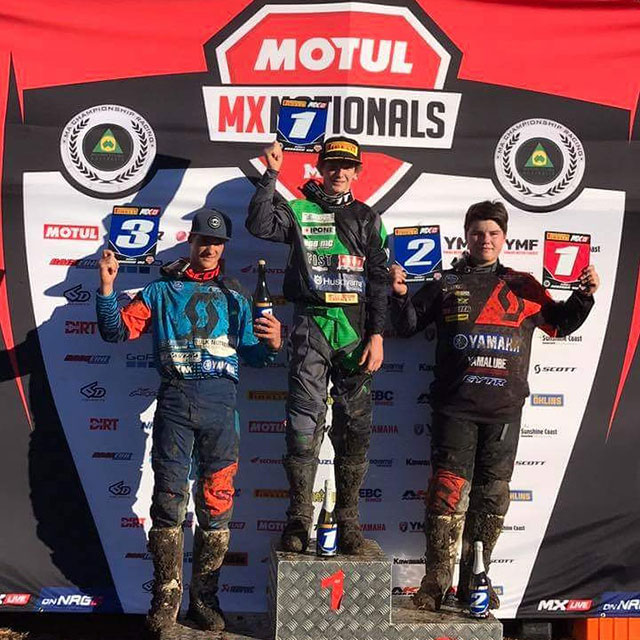 It was celebrations all round at the fourth round of the Motul MX Nationals for the guys at WBR Bulk Nutrients with Hugh McKay landing the team a podium spot for the first time this year in the Pirelli MXD class.

?While many riders were struggling in the mud and sloppy conditions at Horsham, these are the kind of conditions which ?Tassie based McKay relishes, where he can focus on his consistent riding and minimising mistakes.

?After plenty of rain overnight and a cold morning, it was obvious the conditions were going to suit the riders based in the Southern states.

In his first moto McKay managed one of his best starts this year coming around the first corner in 3rd place, but an easy race was not to be as he fell and lost multiple positions, recovering well back in the pack. From here, Hugh put some consistent laps down as riders continued to go down around him, in what could only be described as a battle of attrition!

With a bit of luck on his side this time, and solid riding, Hugh managed to pick up places right till the last lap, finishing moto 1 in 5th.

In the second moto, Hugh started with a better plan, avoiding any carnage and establishing himself at the front early. A bit of back and forth action ensured with Hugh fighting between 3rd and 5th places. His final lap times saw him finish on the back of the 3rd place rider in 4th, but it was good enough for 3rd overall for the weekend; a spot on the podium! 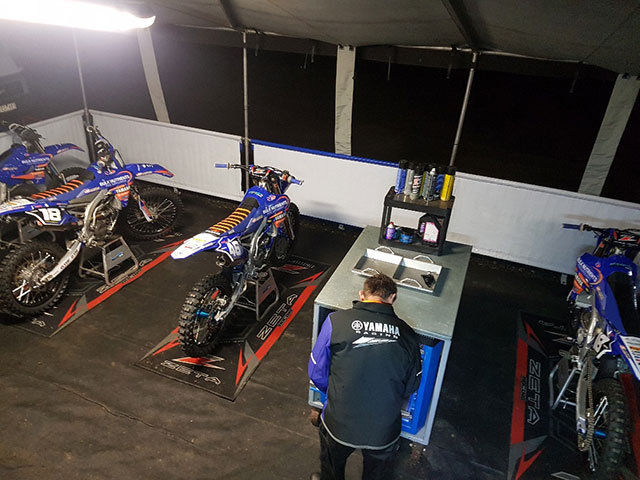 The Bulk Nutrients WBR team at work
In the MX2 class Aaron Tanti has shown some amazing speed recently, ??with a flat tyre cruelly ending his chance of a maiden win in ?Conondale. Not to be deterred, Aaron brought plenty of confidence to ?Horsham, getting a great start in moto 1 rounding the first corner with ?the front pack.

?Things were looking bright until midway on the first lap when Aaron ?went down, and had to fight back from close to dead last. In ?conditions which had clearly deteriorated from the first MXD race, ?Aaron‰Ûªs main battle was keeping the bike upright and moving, as many ?machines expired around him.

?Solid riding throughout saw Aaron claw back more than 20 positions ?landing himself a solid 8th in a wild race.

?With hopes high for Moto 2, Aaron again got a great start, but went down early in a deå«ja` vu repeat of moto 1. Once upright, the same fight ensured, as Aaron reeled in many riders and sat his path towards the top 10. While not a fairy-tale ending, Aaron managed a 12th in an extremely tough race, giving him a solid 9th overall, which was enough to move him up in the championship race.

With many top teams bringing home dnf‰Ûªs and broken bikes, team manager Travis Whitten was wrapt with the results, particularly Hugh‰Ûªs 3rd given the conditions.

Main Photo: Hugh McKay finished on the podium (3rd) in the MXD class