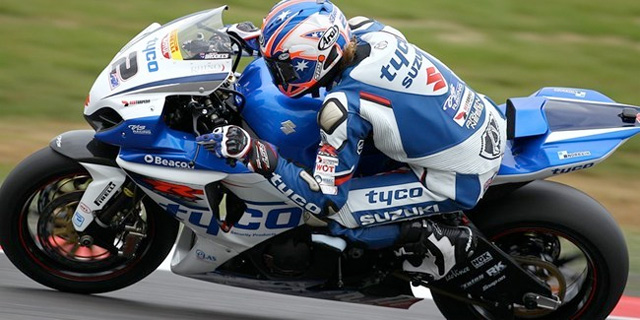 Tyco Suzuki's Josh Brookes claimed the opening pole position of the MCE Insurance British Superbike Championship season at Brands Hatch as the results were shook up in qualifying as several of the title contenders missed out on the final Q3 session in the battle for pole position.

"I am really happy to have taken pole today; sometimes it goes your way and the conditions work for you and today was one of those days, but you can see that it wasn't for Tommy and Michael as it is easy to get caught out," Brookes said.

"The Tyco Suzuki was working well in the conditions and I could feel it moving around underneath me so I did the fastest lap and then thought it would be enough as I could have pushed more, but it was close to the edge. The other guys had done their faster laps before me and I thought I might be able to hold it, which we did. I am looking forward to the races but it is good for us that we start from pole," the Australian concluded.

The opening session was dramatic for a pair of the title contenders as reigning champion Tommy Hill crashed out at Graham Hill Bend on his third lap and despite the frantic efforts to try and get the Swan Yamaha back on track the damage meant he was unable to continue. He will start from 29th on the grid for the opening race as he is set for a challenging start to his title defence.

"It was unfortunate for me to have had a qualifying session like that; it was hit and miss with the weather and I felt confident that we could secure a good position," Hill said.

"I was on a lap and came up on a slower rider and I went down the inside but as I went off line I hit a wet patch and I just went down. I tried to pick the Swan Yamaha up, but unfortunately there was too much damage to get it back and out on track again. I am a bit gutted but tomorrow is another day; I just need to try and come through the pack at the start but it is ok, I will have my binoculars with me!"

Michael Laverty on the Samsung Honda was another rider to miss out as he pitted whilst running ninth but as he returned to the garage he dropped down the order and then before he could return to the track it began to drizzle and he will start 21st on the grid.

Chris Walker had been fastest early in the Q1 session after topping free practice three earlier in the day before Michael Rutter and then Tristan Palmer went to fastest. The GBmoto rider headed Rutter, Kirkham, Patric Muff and Lowry.

In Q2 Brookes upped the pace but then Kirkham retook the advantage at the top of the times on the Samsung Honda whilst Shane 'Shakey' Byrne was also closing in on the Rapid Solicitors Kawasaki. Brookes though continued the charge and ended the session fastest after an initial 10 minutes of untimed practice ahead of Kirkham, Rutter and Luca Scassa. Ian Lowry, Gary Mason and Alastair Seeley all missed out on the final shootout for pole after dropping outside the top ten in the closing stages.

In Q3 the top ten prepared to fight for the pole position as Brookes went to the top of the times in the opening minutes before Kirkham challenged and moved ahead. The Tyco Suzuki rider though had more to come and he pushed on to move back to the top of the times as Shane 'Shakey' Byrne went third; the Rapid Solicitors Kawasaki tried to improve but ran on at Paddock Hill Bend and was able to keep upright and rejoin. He qualified ahead of GBmoto's Tristan Palmer who completed the front row on the team's debut in the championship. Freddy Foray, Noriyuki Haga, Tommy Bridewell and Michael Rutter complete row two.