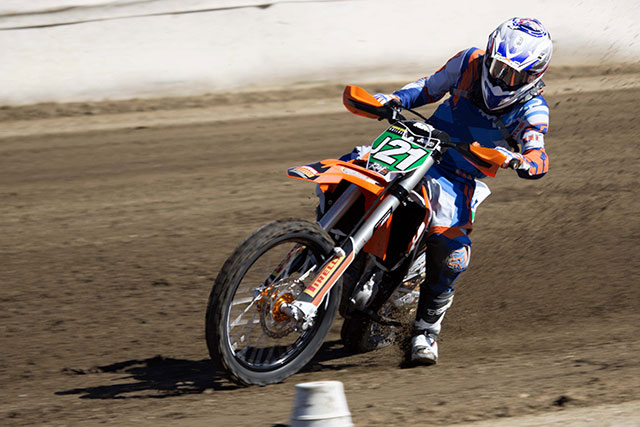 Another battle between two of Australia‰Ûªs best dirt track racers looms as the highlight of the annual Casey Stoner Cup meeting to be staged this weekend, April 22 and 23.

Jarred Brook continued his great run of success at the recent Trackmasters meeting when he won all three senior classes, but his toughest opposition came in the Rod Allen Memorial Pro Open final when he only passed Damien Koppe on the final corner.

Brook‰Ûªs form was a carry on from the Australian Championship showdown last year but the teenager knows he will still face a huge battle this weekend.

Koppe, a former national champion at both dirt track and long track, is taking a far more serious approach to racing this year and left his bikes locally after the Trackmasters and is flying back from Townsville for the Stoner Cup keen to exact revenge on Brook.

Accompanying him is teenager Kayden Downing, who made a big impression at the Trackmasters meeting.

The youthful nature of the line-up for the feature events is further shown with local teenagers Boyd Hollis, Mackenzie Childs and Connor Ryan all looking to build on their recent good form. Former outstanding junior Sean McLellan is also among the entries.

While the senior racing will take the spotlight, junior action should be equally intense particularly as riders will use this weekend as a warm-up for the New South Wales Junior Track Championships to be staged at the same venue on the June long weekend.

The junior entries include numerous state and national champions, including a large contingent from north of the border.

Local club member, Billy van Eerde heads the entries for the older junior classes, with his toughest opposition again likely to come from Harry Maxwell. The Proserpine rider, Maxwell completes the travelling trio along with Koppe and Downing in the senior events.

In the younger age classes, local riders like Ryan Smith, Luke Bush and Cameron Dunker will need to use all their local knowledge in the face of opposition form Queensland and other New South Wales clubs.

Riders‰Ûª briefing and practice gets underway at 9.30 am Saturday and action continues on in to Sunday.

For fans it is a cheap day out, either Saturday or Sunday, with just a $5.00 per car entry, and a gold coin for motorcycles, with full canteen facilities available.