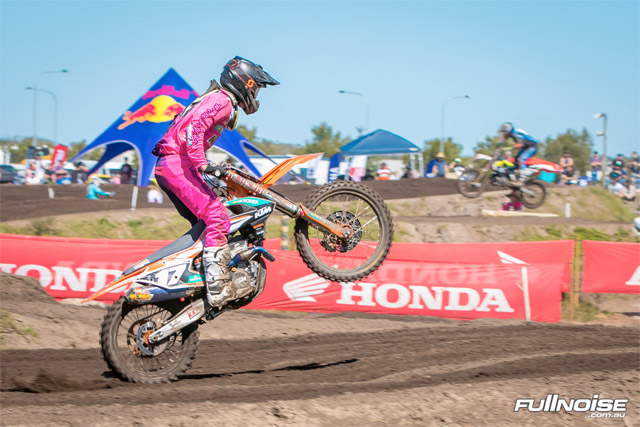 KTM Motocross Racing Team rider Caleb Ward has made a shock discovery which will sideline him as the opening shots are fired in this year's Australian Supercross championship tomorrow night.

It's been revealed that Ward inadvertently rode last weekend's US GP at Glen Helen with a broken ankle, following a savage case-out at Pala Raceway on the Tuesday last week.

Ward thought he was dealing with a mere sprain and gritted his teeth through the pain of every jump landing on Sunday, however a subsequent MRI has shown that he was in fact carrying a fracture.

The factory team has withdrawn Ward from this weekend's first round, both to shield the injury from further exacerbation due to the numerous high-G impacts sustained during Supercross, but also for another good reason.

Ward revealed that he had been adapting his jumping and landing style at the weekend‰Ûªs GP in order to favour the injured foot - and the team has decided that repeatedly altering his weight balance on the footpegs during the aggressive loading and unloading of weight during the heat of battle in a Supercross National might be inviting a random and unpleasant outcome.

Sadly for Ward, his second attempt to complete his first ever Supercross season has not begun well, after he last year sustained concussion at the second round of the Aussie championship and remained sidelined for the rest of the series. Ward will have a better understanding of his healing timeline, and likelihood of a return to the championship, next week.

‰ÛÏI‰Ûªm definitely out for this one, and we'll see how rehab goes and how well everything heals up and goes from there." Ward said. "When I hurt my ankle over in the US I thought it was just sprained, but when I got back it never got any better.

"I was going to rest until Friday and then just ride, but Kyle thought it best to go get an MRI. I found out yesterday it has had a fracture in since early last week. It hurt quite a bit on all the jumps at Glen Helen, and now I know why. With Supercross, the whole track is jumps so it's not worth the risk of damaging it further. It's not a bad injury at the moment, so it‰Ûªs not worth the risk of going out and casing a jump or something and making it into a bad injury that will affect me for a lot longer.

"Better to heal up and make it a quick recovery.

"Over there, in the jump section of the track I had to put my heel on the footpeg and basically try and soak up the jumps with my left leg. I was trying not to use right leg, because it was painful, but obviously with Supercross tracks, if you‰Ûªre not riding at 100% and you start hitting jumps differently at full speed, there‰Ûªs a risk of having a big one.

"Last year with Supercross I was a little bit wary but this year I was really looking forward to it; I really enjoyed it once I got the hang of it a little bit. So it kind of sucks to miss the first round but it's for the best. I will make a little bit of a plan for rehab on Monday, and go from there.‰Û