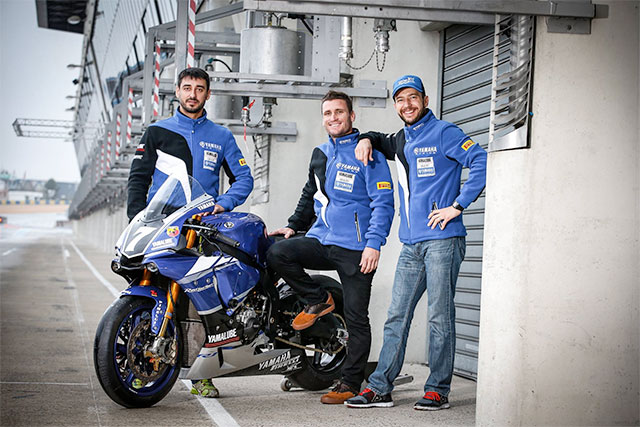 The two official Yamaha teams come equipped with their brand-new endurance-spec YZF-R1s to take part in 24 hours of non-stop racing action from Saturday 3PM to Sunday 3PM during the 39th edition of the famous 24 Heures Motos in Le Mans.

Broc Parkes will be flying the flag for Australia as he suits up in the YART Yamaha Official EWC Team.

"I'm really looking forward to the race, it feels like too long in between races," Parkes said. "Unfortunately we haven't had too much off season testing because of bad weather, but we can tell the YZF-R1 always works well in Le Mans and it's a track I like. I think we have one of the strongest teams ever. It's a 24hour race so anything could happen, but for sure we want to try and win."

The first day of pre-season testing for the team at the Le Mans circuit already saw some a glimpse of YART's YZF-R1 strong pace, which saw them set a new track lap record for the endurance class at the Bugatti circuit last year. The Austrian team returns to the scene more determined than ever to position themselves as a key protagonist and can't wait for riders Parkes, IvÌÁn Silva and Max Neukirchner to kick off the season.

After almost seven months of waiting since the last endurance race, the 2015 Bol d'Or, the GMT94 Yamaha Official EWC Team makes up the second Yamaha squad and is is eager to get back on track with an exciting new rider-line-up, consisting of David Checa, Louis Rossi and NiccolÌ_ Canepa. They will be guided along the way by Team Manager Christophe Guyot, who's leadership already rubbed off on 'endurance rookies' Rossi and Canepa when the team secured the fastest time of the second day in wet conditions during the official pre- Le Mans test last week.

The Le Mans Bugatti circuit was built in 1965 around an already established 24-Hour track and is dominated by slow corners. Late braking, hard acceleration, and rear end traction are essential at this circuit, which offers plenty of overtaking possibilities that the fans don't want to miss out on.

The opening race of the season is also the longest featured on the 2016 endurance calendar and forms the ultimate for the riders who are confronted with 24 hours of grueling action, uncertain weather conditions, and visibility problems during the hours between dusk and dawn. All the while it is crucial for the riders to maintain their focus whilst maneuvering around a 998cc machine that weighs 172 kg, because every second counts.

To make this highly-intense race easier for the riders to cope with, the YZF-R1 has been modified. Not only is the weight and size reduced, but also the sturdiness and performance are enhanced. However, endurance bikes remain heavier than the short-distance race bikes, because of the lights on the bike for riding in the dark, a bigger tank that holds more fuel and the heavier bodywork for extra durability.

The GMT94 and YART team will be joined in the Formule EWC class for this extremely challenging race by fellow Yamaha teams 'Motobox Kremer Racing' and the 'Maco Racing Team'. In the superstock class Yamaha will be represented by 'Yamaha Viltais Experiences' and 'Slider Endurance', as well as five other non-contracted teams.