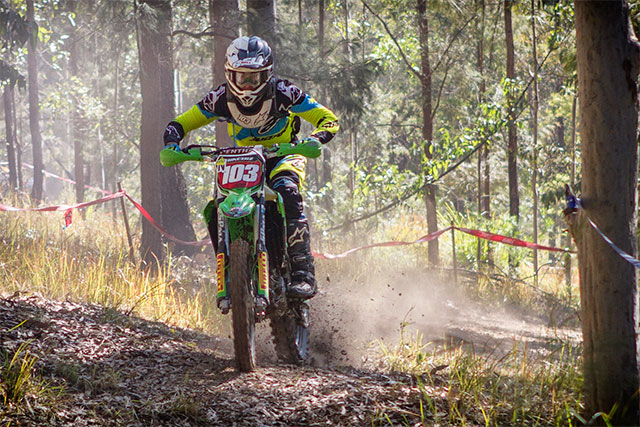 It was the usual suspects who rose to the occasion today to claim victory at Rounds 9 & 10 of the 2016 Yamaha Australian Off-Road Championships at Monkerai, New South Wales this weekend.

In what were perfect conditions today with light wind, a warming sun but still a moist track the Juniors had two hours to put rubber to dirt and fight the NSW terrain to claim victory for their second Cross Country race for the season.

Zak Mitten yet again proved his strength in the Championship J4 class and was victorious in taking home first place in the Cross Country Race on a difficult and technical track compared to previous Cross Country race at Hedley a few weeks back.

With both the Mitten brother‰Ûªs out on track looking for glory it was Zane Temperley who threw in a challenge walking away with second position, while Tom Mitten just couldn‰Ûªt quite keep on the pace to finish in third.

It was Will Price and Jordan Ryan who wrapped up Round 9 finishing in fourth and fifth place respectively.

With the clash of the brother‰Ûªs occurring again this time it was Joshua and Mitchell Brierley who were looking to finish 1,2 but Corey Hammond had other plans.

Joshua Brierley rode to the finish taking out both the outright win and the J3 class win securing more championship points on the board for himself. Corey Hammond managed to sneak his way in to second position which he held, to come across the finish line taking a podium place.

Mitchell Brierley remained in third crossing the finish line taking the final step on the podium for the Championship J3 class. Tully O‰ÛªNiell and Jye Bennett both managing fourth and fifth place.

Ashden Gramlick proved he was the one to beat today with a perfect performance which saw the stand out rider finish on the top step of the podium for their second Cross Country race of the year.

It was only just a fraction of time before Samuel Noonan made his presence known crossing the finish line in second while Mathew Pye rounded out the day in third.

All Championship Juniors will now take to the Sprints tomorrow for Round 10 of the 2016 Yamaha Australian Off-Road Championship at Monkerai in New South Wales.

For a full list of results and the progressive championship points head to www.mylaps.com.au.


Current Round 9 standings by class: