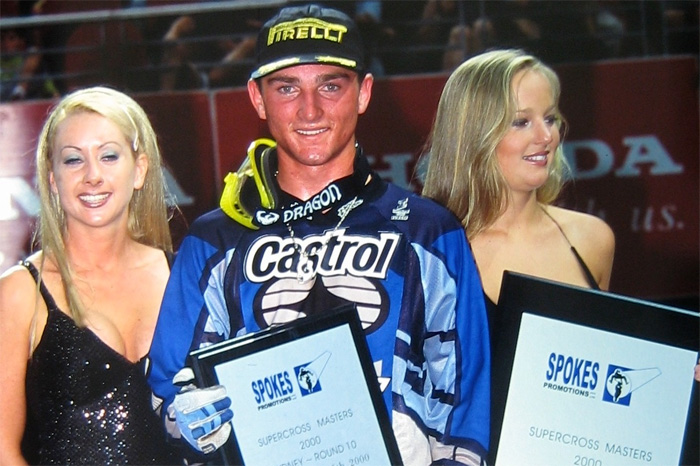 When the Energy Logistix third round of the 2015 Australian Supercross Championship presented by Penrite Oils fires into life this Saturday night (October 31), a very special guest on the SX1 start line will be South Australia‰Ûªs leading international motocross export, Brett Metcalfe.

Metcalfe, 31, first left his hometown of Mannum in rural South Australia to venture overseas to Europe in 2002 to pursue an international career, then headed to the USA a year later ‰ÛÒ and has been there ever since.

Now, with Supercross returning to Adelaide for the first-time in seven years, Metcalfe is making his first race appearance in Adelaide in more than 16 years, when he joins the SD3 Husqvarna team on a FC450 for Saturday night‰Ûªs event, in a ride made possible by event promoters Mark Gilbert and Scott Anderson and round sponsor, Energy Logistix.

In what will be a whirlwind ‰Û÷business trip‰Ûª back to South Australia, in which he has left his wife Sheena and young sons Nash and Maverick at home at Lake Elsinore in California, Metcalfe is intent on mixing it up with SX1 Championship front runners Dan Reardon and Matt Moss this Saturday night, with what is expected to be a huge local crowd cheering him every step of the way.

Below is a quick interview with Metcalfe, as he and his fellow South Australian MX legend brother, Shane, headed to the SD3 Husqvarna race team workshop to move Brett‰Ûªs Adelaide Supercross race preparations into top gear.

Q. Welcome back to Australia, Brett. How good does it feel to be back home in South Australia?

Metcalfe: It‰Ûªs awesome. I always love it every time I can get back, and coming back this time to go racing in Adelaide just makes it feel even better. I‰Ûªve been in the USA for so long now, and the hustle and bustle in Southern California is just never ending, so being back in Adelaide, and especially in Mannum, is so relaxing in so many ways.

Q. Exactly how long is it since you raced in Adelaide?

Metcalfe: It‰Ûªs been a long, long time. I‰Ûªve been back to Australia and raced in other states over the years, but the last time I raced in Adelaide would have been at a Wayville Supercross when I was about 13 or 14 years old in Junior 125s. So it‰Ûªs been a while!

Q. How special does it feel to finally be racing a major event in Adelaide after all this time?

Metcalfe: It‰Ûªs just so cool to be back, finally. The fact that it‰Ûªs been so long, and that the event this weekend is the return of Supercross to Wayville after seven years, is a huge part of me being here. It feels great to be back amongst my family and so many people that I grew up with, and so many fans. It‰Ûªs feeling really cool so far and I hope it feels even better after the race on Saturday night!

Q. When you first left Mannum in 2002 and went overseas to take on the world, did you think you would still be at it, more than a decade later?

Metcalfe: Really, that was the plan. My plan was to race the best riders in the world until my early 30s, and then maybe at the end of my career overseas, come back to race in Australia, like other guys have done. I don‰Ûªt know if that will happen, because I still have great opportunities internationally, so that aspect is for the years ahead.

Q. You‰Ûªve raced for so many of the most prestigious factory race teams in the USA and enjoyed long-term success: how proud are you of your career?

Metcalfe: I am so proud of what I have been able to achieve. I came from Mannum, which in the overall scheme is a little country town in South Australia, a long way from the heart of the racing action in Australia, let alone the rest of the world. So I am proud of where I come from and what I have achieved. As a racer, you always want a little more (with your results), but I am happy, for sure.

Q. What on-track achievements are you most proud of?

Metcalfe: That‰Ûªs hard to pin down to just one, but winning an AMA National at Southwick in 2011 was really cool. And finishing second in the 2010 AMA 450 National MX Championship was a great overall result. Representing Australia in the 2011 Motocross of Nations in France in front of 60,000 fans, and getting on the podium, that was really special, too.

Q. What off-track achievement are you most proud of?

Metcalfe: My family, for sure. My wife, Sheena, and boys, Nash and Maverick, are everything to me.

Q. What do you miss most about Australia while living in the USA?

Metcalfe: Family and friends, definitely. And the relaxed lifestyle I grew up with, certainly.

Q. What will you miss most about Southern California while you are back in Australia this week?

Metcalfe: My family and all my friends over there. And the luxury of just how convenient life is there, with everything accessible 24/7 ‰ÛÒ which is kind of crazy, actually.

Q. How important are your visits to schools in and around Adelaide this week?

Metcalfe: This is a really important part of being a professional racer. It‰Ûªs part of your job description, to promote yourself, your team and your sponsors and just be a good ambassador for the sport. It‰Ûªs important to me to meet the kids and if that translates into just one kid wanting to ride a dirt bike, that‰Ûªs all good.

Q. How fast will you settle in with the SD3 Husqvarna team FC450 you will be racing this weekend?

Metcalfe: It‰Ûªs my first time on a Husqvarna and my brother Shane and I are on the way down to the team workshop to make final set-ups to the bike today and then I‰Ûªll be hitting the practice tracks to get as much time in the saddle this week as I can. Steve from SD3, and Luke Arbon who rides for the team on a 250, are really helping out, and I have to say thanks to the Adelaide Supercross promoters Mark Gilbert and Scott Anderson, and the crew from Energy Logistix, who are the major sponsor of the race, for all they have all done to help me be here this weekend. It‰Ûªs going to be a busy week, definitely, and I hope I can come through with the result we all want on Saturday night.

Q. Dan Reardon (CDR Yamaha) and Matt Moss (Motul Suzuki) are locked into a rather serious battle in the SX1 class of the 2015 Australian Supercross Championship, are you planning to be the spoiler in that battle this weekend?

Metcalfe: I‰Ûªve been watching what‰Ûªs been going on the Championship, and yeah, I‰Ûªd like to be right up there this weekend, for sure. It looks like those two guys have maybe gained an edge over everyone else in the first two rounds, and maybe Gavin (Faith, Penrite Honda Racing) is up there too. But they (Reardon and Moss) certainly looked aggressive at round two, and I know they are in the midst of a Championship, but we will all want to win on Saturday night, myself included.

Q. You recently announced you have a deal to race in Canada again for 2016 with the Rockstar Yamaha team, is that your major goal for 2016?

Metcalfe: I‰Ûªve got a deal locked away to race with Rockstar OTSFF Yamaha in the Canadian Nationals next year, which is great. I won the championship up there a couple of years ago, but this year had some DNFs and some bad luck, which hurt a little, as it meant I didn‰Ûªt with the title. I‰Ûªm determined to go back there and pick up the Championship next year, for sure.

Q. Okay Brett, thanks for your time, best of luck this weekend.

Metcalfe: Thanks. It should be a huge event and I hope plenty of fans turn out at Wayville. It‰Ûªs going to be a great night.

With tickets selling fast for this Saturday‰Ûªs Energy Logistix third round of the 2015 Australian Supercross Championship presented by Penrite Oils at Adelaide Showground, Supercross fans should go to www.ticketek.com.au to book their tickets ‰ÛÒ with all online pre-purchase tickets enjoying a special $5 discount on prices at the gate.

Further, all pre-purchased ticket holders have a chance to WIN an awesome Suzuki DRZ70 mini bike and a complete set of THOR MX gear and M2R helmet. To get in on the draw, go to www.gilbertracing.com.au and enter your details and the PAX number found on your ticket for your chance to win.

The non-stop schedule of Supercross action in Adelaide will see gates open at 3pm, then all the fun of the pit party kicks off from 4.30pm, while the gates drop on the first races at 6pm.

Top Image: Flashback to 2000 and a young Brett Metcalfe enjoys the spoils of victory at a Supercross Masters event at the Sydney Superdome.