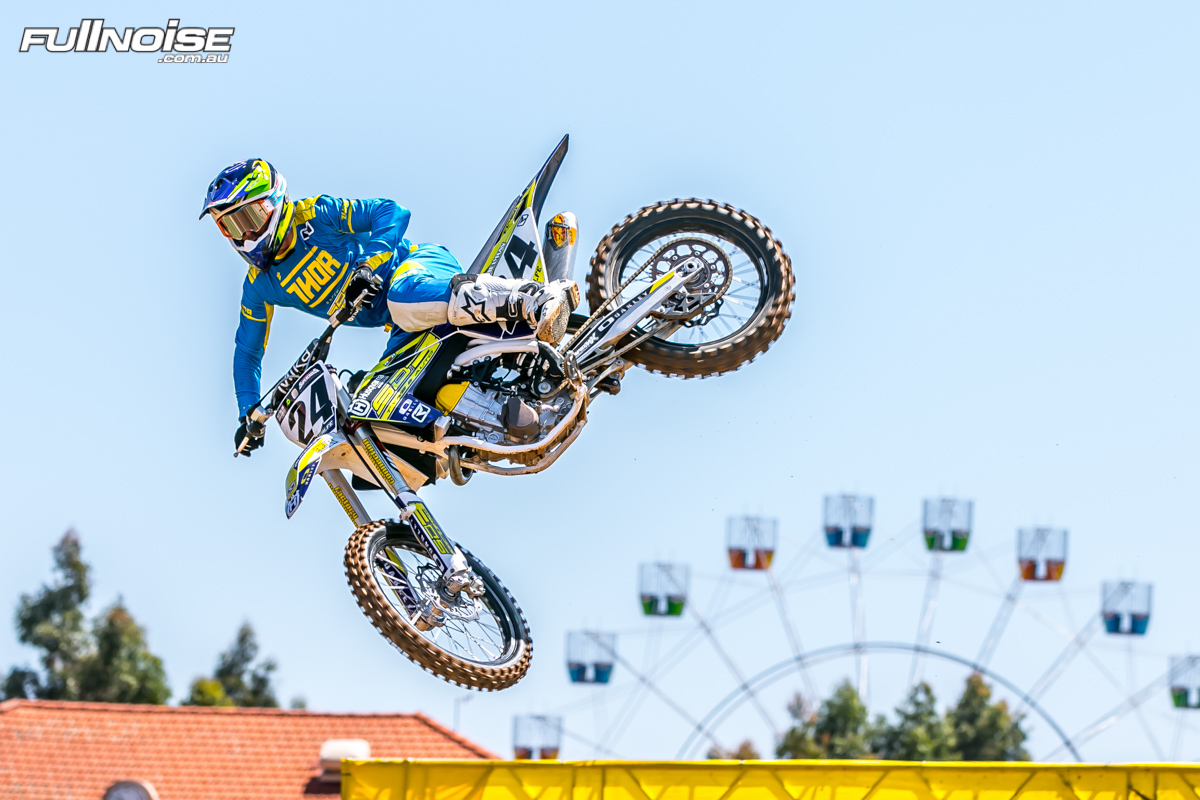 South Australian-born international Brett Metcalfe has given Husqvarna‰Ûªs 2016 FC 450 a spectacular debut showing in the Australian Supercross championships, finishing second in tonight's third round of the championship at his home venue of Wayville in Adelaide.

To the cheers of the home crowd, Metcalfe powered the virtually stock SD3 Husqvarna through the pack as he recovered from an average start, overtaking defending champion Matt Moss in the closing stages of the race and finishing a close second behind championship leader Daniel Reardon.

He rode the only 2016 model Husqvarna FC 450 in the country and, despite a wealth of experience with factory level race bikes, was overjoyed with how competitive the Swedish-born brand‰Ûªs top-shelf motocross weapon was at national level Supercross in standard trim.

‰ÛÏI‰Ûªm really happy with today." Metcalfe commented after racing on Saturday night. "I haven't been here since I was seven, and I haven't raced here since ‰Ûª99, so for me it was just awesome to relive old memories. It was a pretty cool day.

"As far as the racing, I was extremely happy all day with the SD3 Husqvarna, it ran great through practice and qualifying. The times were good; we were there on the bubble all day.

"The heat racing didn‰Ûªt go so well, I had some bad starts and actually ended up twisting my knee a little bit, so I had to take care of that. But going into the main event the track really shaped up nice and it was a good track for racing tonight.

"Just to be that close after such limited time on a bike for supercross, I thought was awesome. And you know, the bike, I mean it is literally nearly a stock bike, I think that's phenomenal and it says a lot for the machine, I think they should be proud of the new Husqvarna. It‰Ûªs pretty cool.‰Û 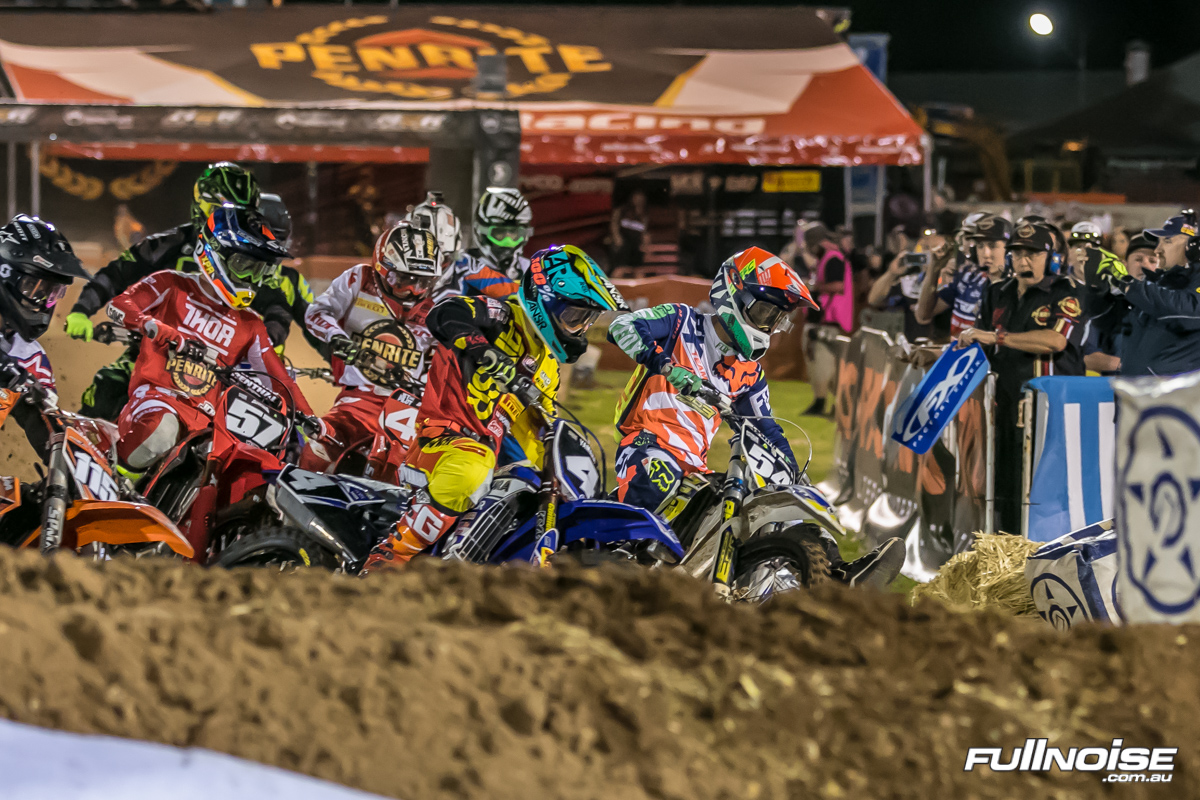 Luke Arbon claimed the holeshot in the SX2 main event - Credit: Aaryn Minerds
Team-mate and fellow South Australian Luke Arbon also gave the home crowd plenty to cheer about in SX2, first by grabbing the holeshot on his Husqvarna FC 250, then - after a first-lap fall - by slicing through from outside the top 10, to an exciting fifth place finish.

‰ÛÏIt was good, I enjoyed it, and that‰Ûªs what I came here to do." Arbon commented. "I‰Ûªm not really happy with a fifth, but I was definitely happy to just ride my bike and have fun.

"The final started with good, but the holeshot, and I led the first lap and was doing really good until I went to the inside and lost the front and fell off, I got back going again, and worked my way back to fifth. I was just behind Willsy and was catching him, but then I got held up by a lapper and we just kind of stayed the same after that.

"The day and night here went awesome, they seemed to have a pretty massive crowd, so that was cool, and it definitely felt good to be in front of my hometown crowd, I had a lot of friends and family here, so it was cool.

"Brett and I were both under the same tent, so I definitely think we would have been one of the most popular pit tents during the autograph sessions - it was kind of cool.

"I‰Ûªve got two weekends off now and I know what I need to work on, so I'll get to it and come out swinging for round four.‰Û 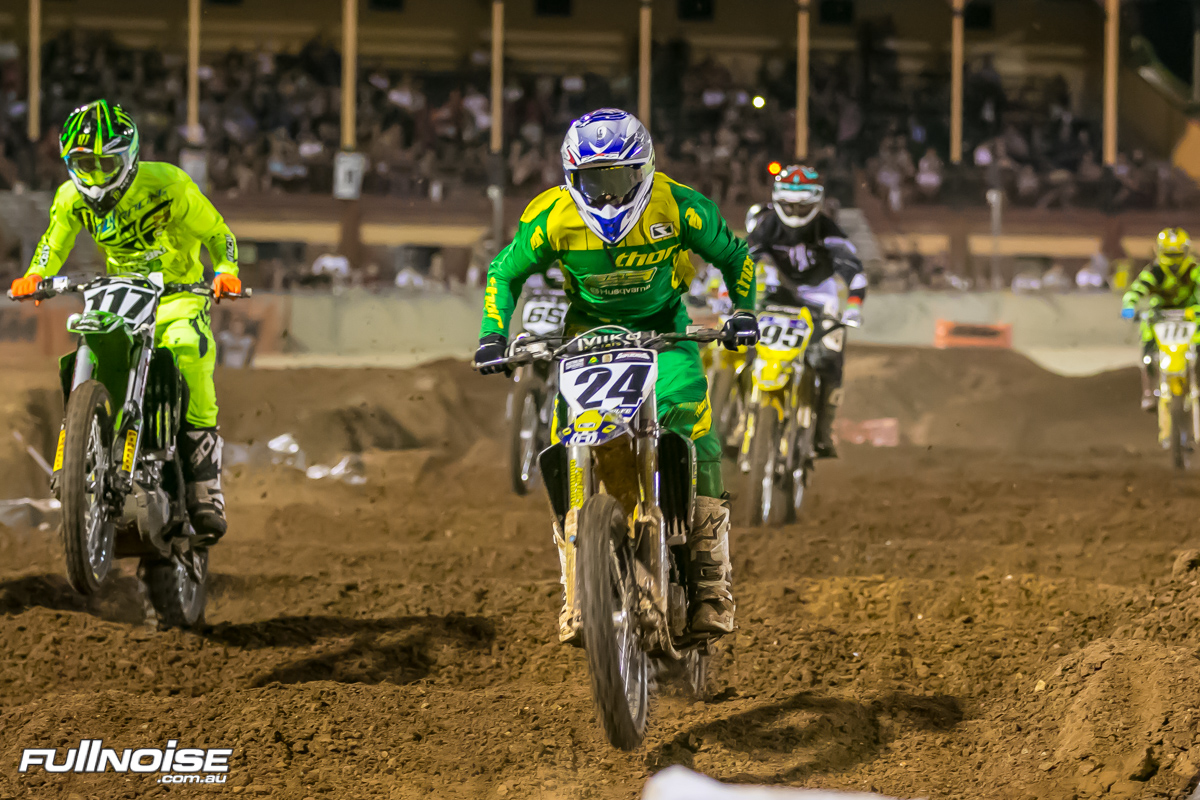 Brett Metcalfe works his way through the field early in the SX1 main event - Credit: Aaryn Minerds
SD3 Husqvarna team owner Stephen McKinnon could not have asked for a better night as Metcalfe joined team regular Arbon in their home state.

‰ÛÏIt was a fantastic night, a great night for Australian Supercross." McKinnon enthused. "Brett was amazing, he surprised me with what he achieved overall. It was just an amazing result and he was absolutely flying at the end. I think another lap or two and who knows what could have happened, coming right up behind Dan Reardon.

"Luke rode beautifully as well; he had a huge holeshot and led the majority of the first lap. He tucked the front in a bit of mud and jumped back up in tenth or 11th and charged back through the pack. Yet again another brilliant ride to finish fifth overall.

"So, two rides from the boys tonight we are very proud of, and I think the roar of the crowd when Brett went past Matt Moss and was charging hard on Reardon, was just unbelievable. A fantastic night for Supercross, and a good night for SD3 Husqvarna, that's for sure.‰Û