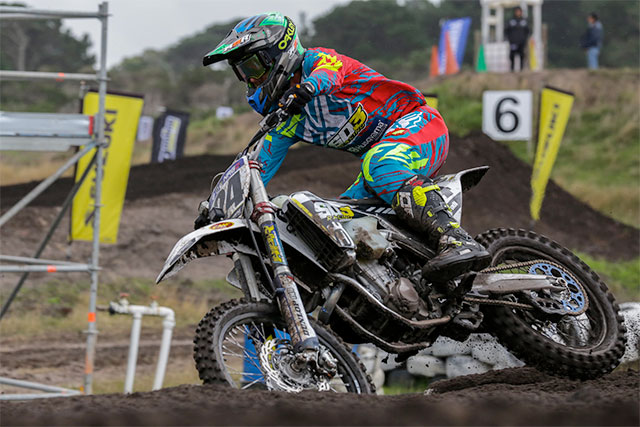 Few expected SD3 Husqvarna's Brett Metcalfe to be back on the pace quite so quickly and completely as he was at the opening round of this year‰Ûªs Motul MX Nationals series at Wonthaggi in Victoria.

Less than a month after arriving back in Australia and with just a couple of days testing under his belt, the highly-decorated South Australian-born international took the his Husqvarna FC 450 to the top of the time sheets in qualifying, and posted lap times among the fastest in both motos.

Disappointingly, there was to be no fairy-tale homecoming for ‰Û÷Metty‰Ûª, who after recovering from a Moto 1 crash to finish fifth, was positioned threateningly behind eventual race winner Dean Ferris and Kade Mosig in third place in the second moto, when a roosted rock holed his ignition cover and his machine began to bleed out.

The DNF leaves Metcalfe 19th overall in the championship; not ideally positioned, but with clear proof of his level.

‰ÛÏIt‰Ûªs a mixed bag of feelings I guess, but at the end of the day I‰Ûªm walking away with a handful of positives and definitely some negatives there," Metcalfe said. "But we were fast all day and competitive with what was probably two good days of testing going in, and a new setup with the Husqvarna 450. We sat on top of qualifying session and had the fastest lap in both motos. Our bike was working awesome today and our track speed was good. I felt like that second race was one that got away, but I wanted to come in and gauge where we were and after arriving just three or four weeks ago it‰Ûªs not bad, but there‰Ûªs a lot of room to progress.‰Û