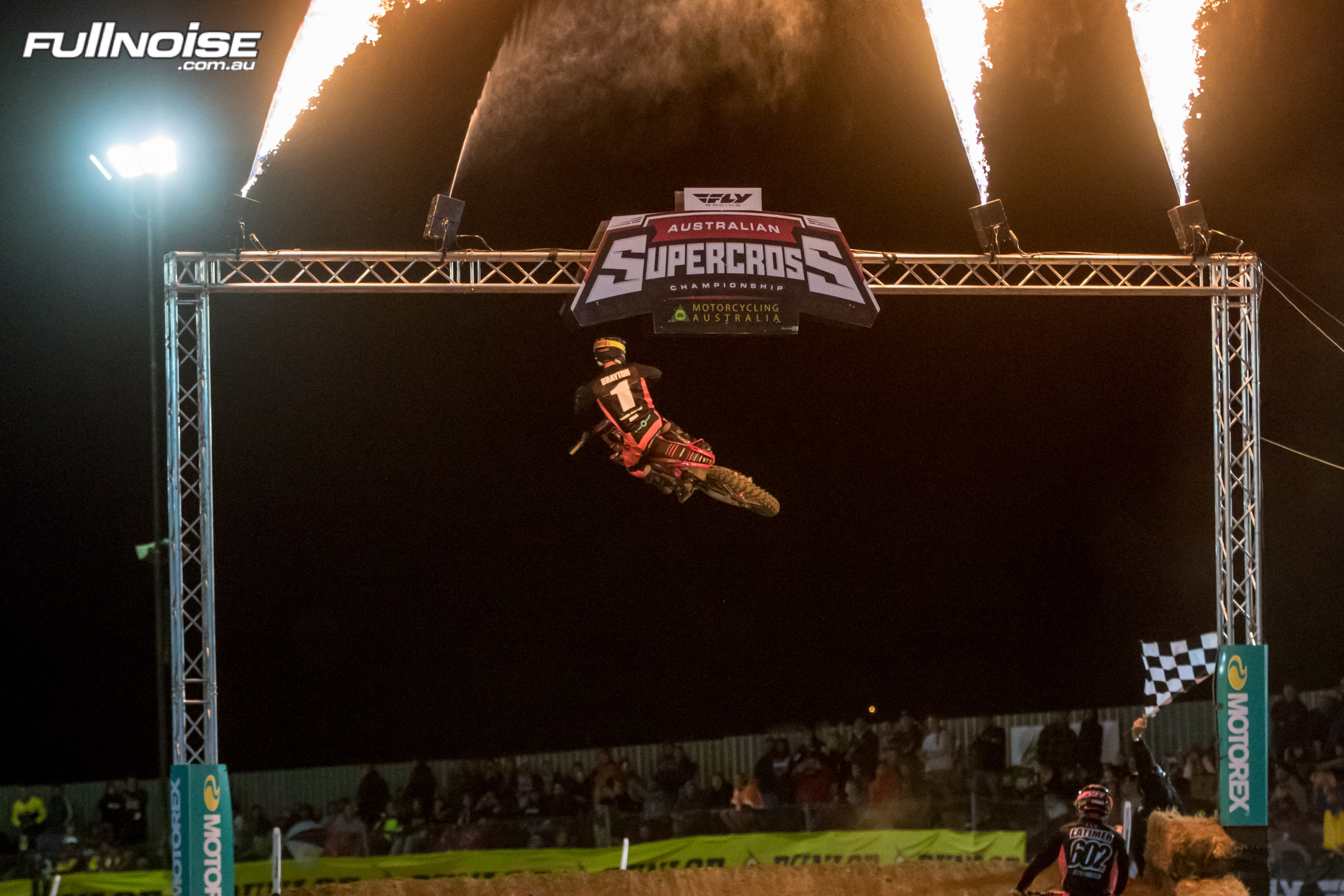 Defending SX1 champion Justin Brayton fired his first warning shot that he would once again be the one to beat when the Penrite Factory Honda Racing Team rider lead qualifying with a 44.675 lap, four-tenths quicker than Luke Clout. Clout's Yamaha Monster Energy team-mate Dan Reardon was third fastest ahead of hometown hero, and defending round winner, Brett Metcalfe who was just over a second slower than Brayton. 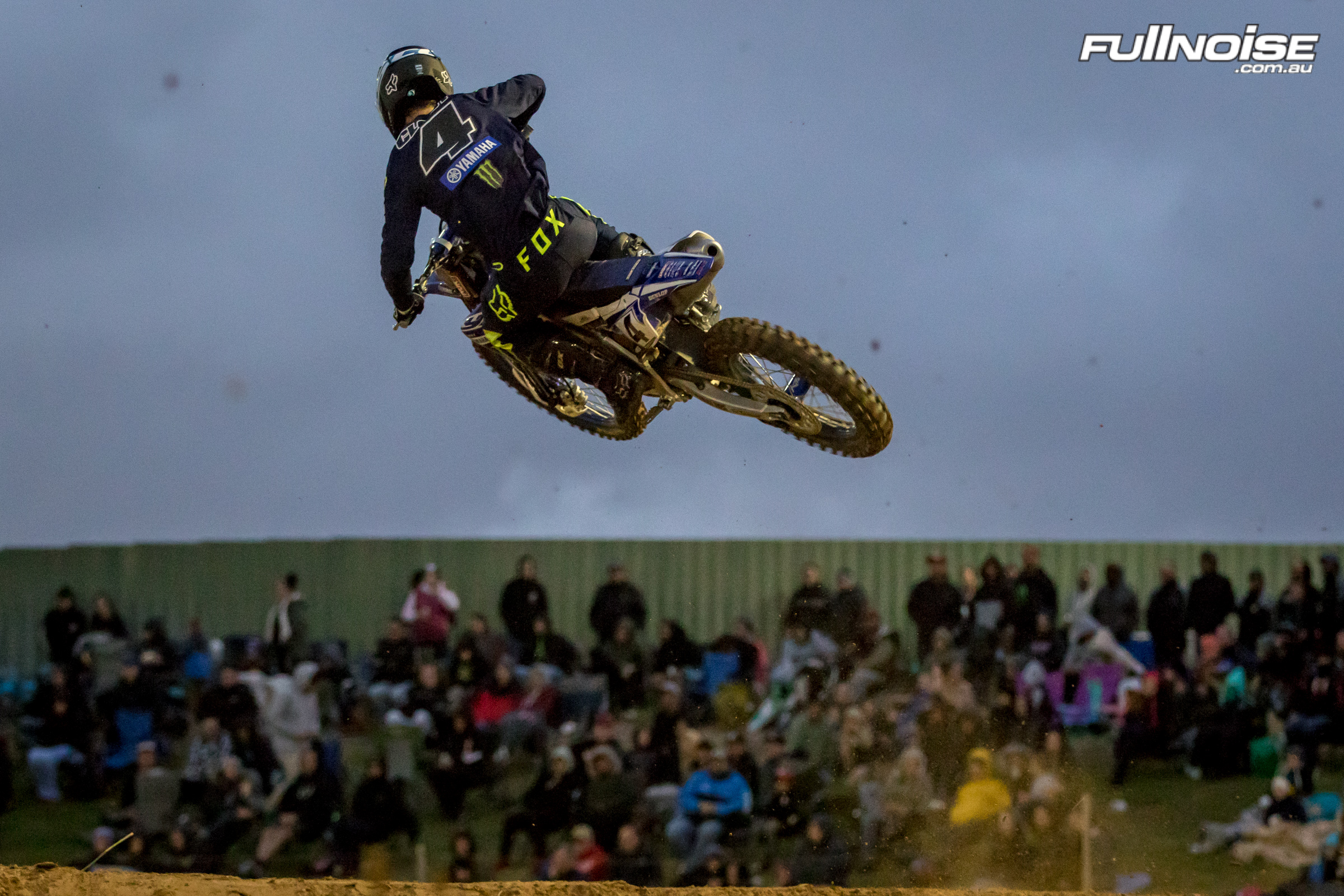 Luke Clout again impressed on his way to second place on the night - Credit Aaryn Minerds
Heat one of the SX1 class saw Metcalfe bolt out to an early lead with Yamalube Yamaha Racing's Richie Evans and Luke Clout in tow. Metcalfe looked to have the win in the bag until a big crash in the whoops aloud Clout take the win ahead of Evans, after dropping back to fourth Metcalfe eventually came home third.

Reardon lead the opening lap of SX1 heat two ahead of Dylan Long and Brayton. Brayton was quickly into second were he and Reardon then went toe-to-toe before the American managed to take the lead on lap four. Reardon held onto second while Lawson Bopping impressed with a solid third ahead of Victorian Dylan Long.

Reardon was on it in Superpole taking the fastest time ahead of Brayton, Clout and Bopping. Metcalfe and Evans rounded out the six. 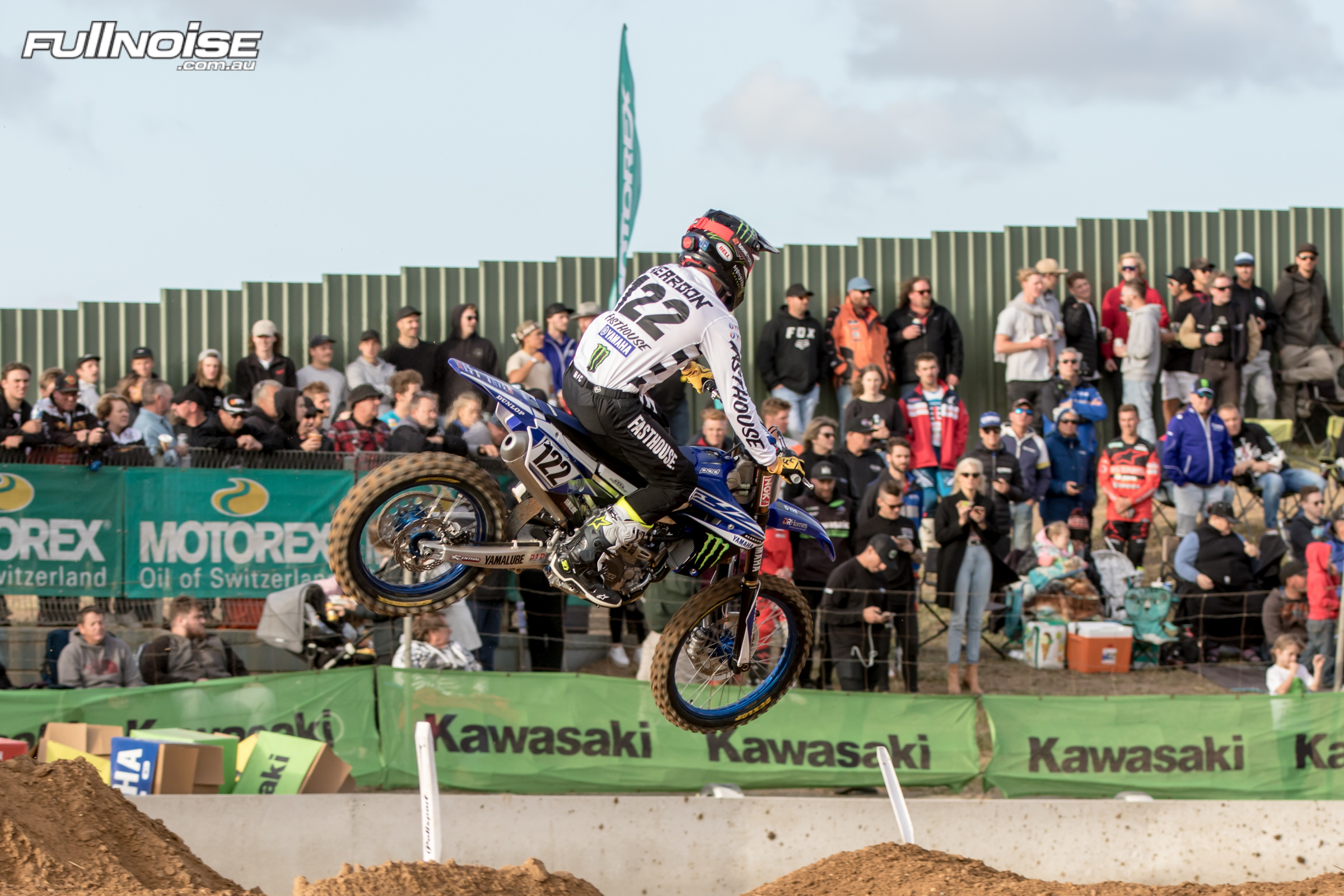 Dan Reardon was out front all day, winning Superpole and leading the main event early - Credit: Aaryn Minerds
As the gate dropped on the 20 laps SX1 main event, Brayton took the lead on the opening lap ahead of the CDR duo of Reardon and Clout. KSF Racing's Gradie Featherstone impressed running a solid fourth while holding of Richie Evans and Honda Motorcycles backed Joel Wightman for three laps. Home town hero Brett Metcalfe meanwhile was mid-pack after an early race tip over and left with a lot of work to do if he was to repeat last years feat of a round win.

Brayton momentarily lost control of the race lead, when a mistake through the big rhythm section nearly put an end to the American's night, however, he was somehow able to save a certain crash, though lost the race lead to Reardon.

After another great battle with Reardon, Brayton once again took control of the race lead and quickly went about extending his lead by about a second a lap. Meanwhile al the action was behind him by lap, as Metcalfe moved up to sixth place as lappers had already started to factor into the equation, a few laps latter Clout got the better of his team-mate Reardon to take second place. Richie Evans was having a standout night and stayed solid in fourth.

Metcalfe's run seemd to stall at the midpoint of the twenty lap journey with him unable to reel in Evans, he eventually did, but it took another four laps, and by then he was 26 seconds (half a lap) away from the lead. 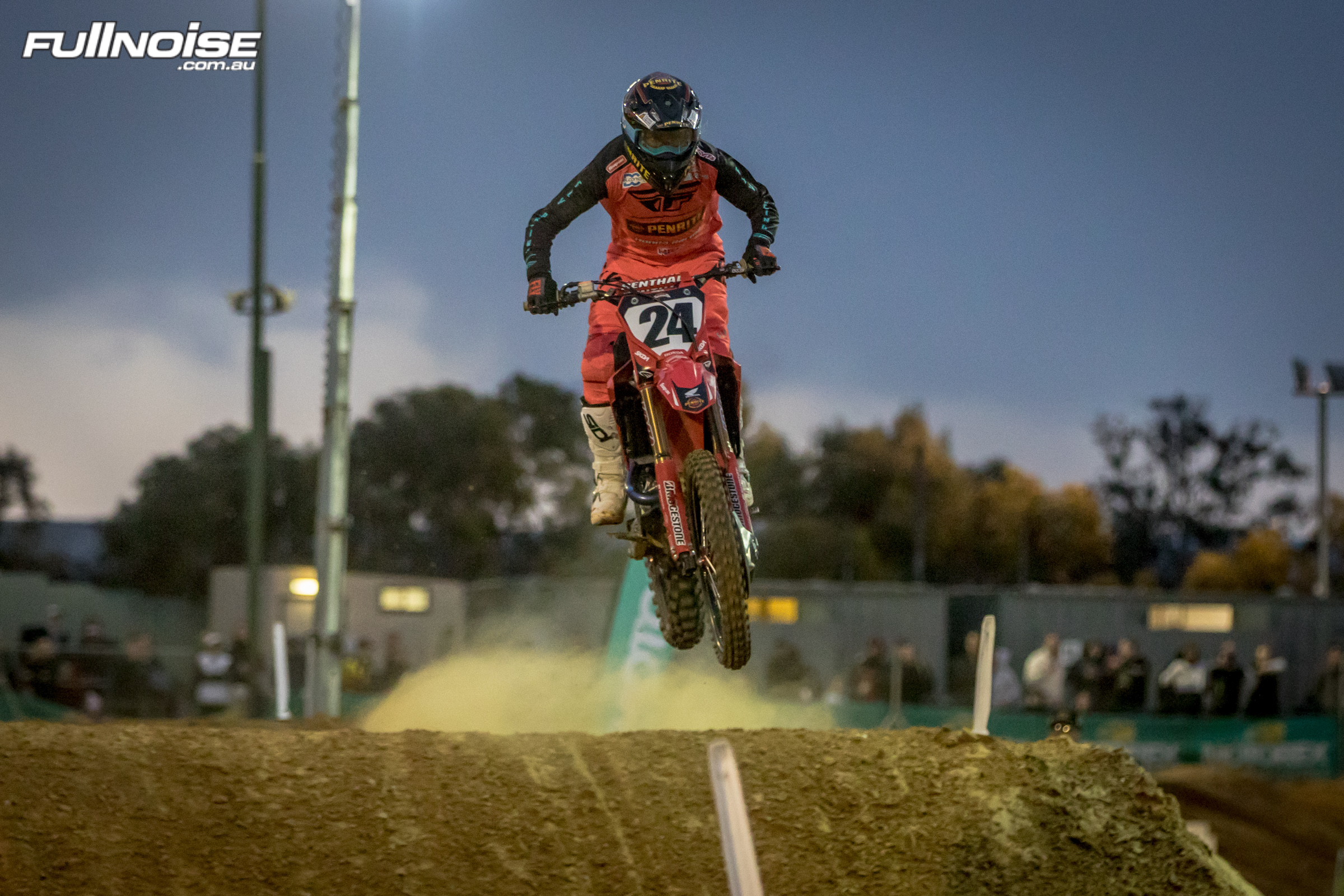 Brett Metcalfe overcame a big heat race crash and a small tip over early in the main event to finish the night in 4th - Credit: Aaryn Minerds
With four laps to go, Brayton was now out to an eight-second lead over Clout and Reardon a few behind that. The only others on the same lap were Evans and Metcalfe, and with a few to go, Metcalfe finally got by a determined Evans for fourth place. With Reardon a further 15 seconds up the road though it was an impossible feat for a hometown hero podium.

When the chequered flag flew, it was Brayton making it two straight wins from two starts in his title defence. Along with leading most of the race he also clocked the fastest lap (45.149) of the race. Clout was second with Reardon third.

Metcalfe held down fourth spot, while Evans finished off a breakout night with an impressive 5th place finish.

Honda Ride Red privateer running out the back of his dads van put in a fantastic ride to finish in sixth and ahead of a lot of more fancied. 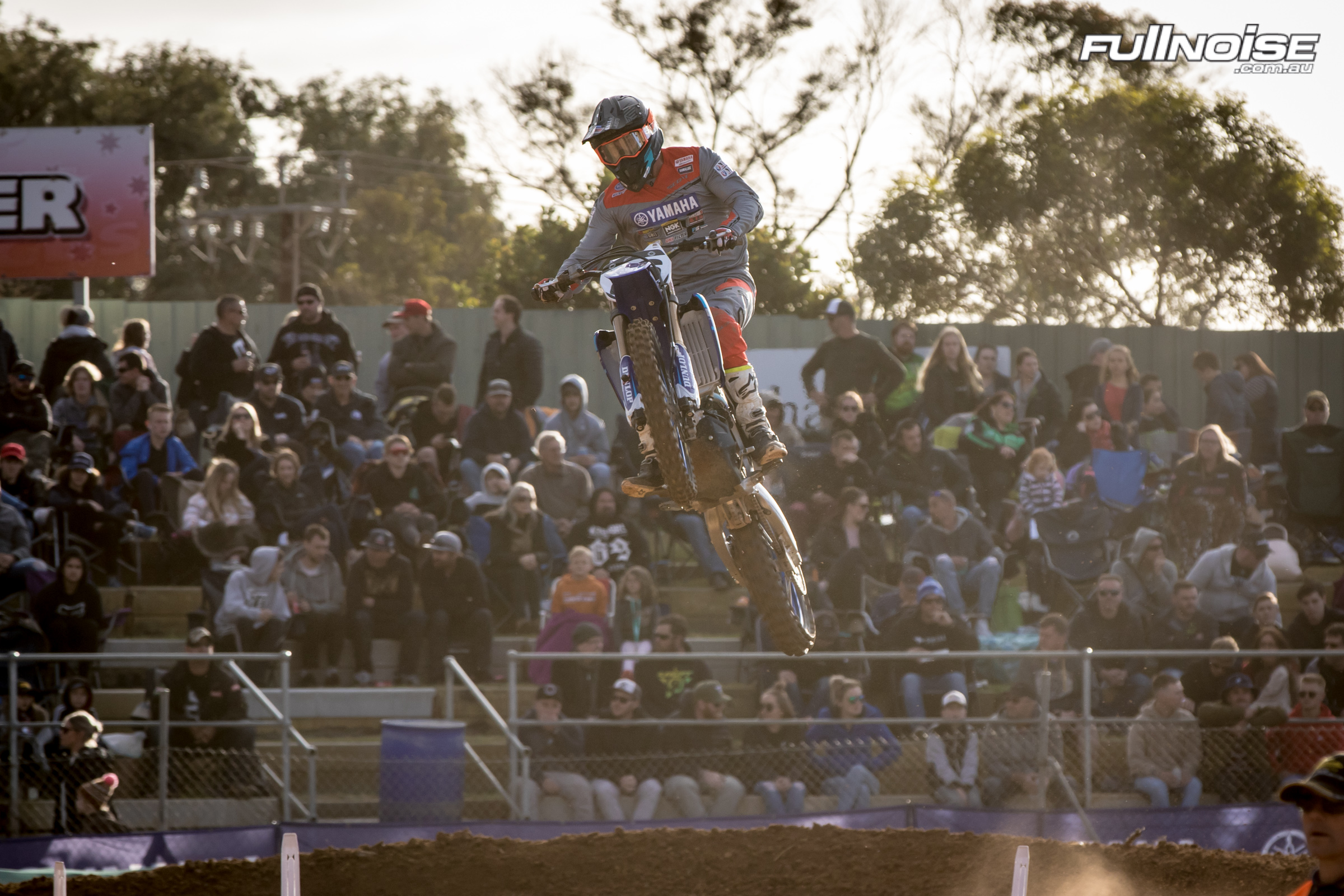 Husqvarna backed privateer Jesse Dobson turned around what looked like was going to be a very average day to finish 7th despite suffering from a damaged ankle from round one and also suffering from a cold.

With his second straight win, Brayton extended his championship lead to eight points over both Clout and Reardon heading into round three in Wollongong. 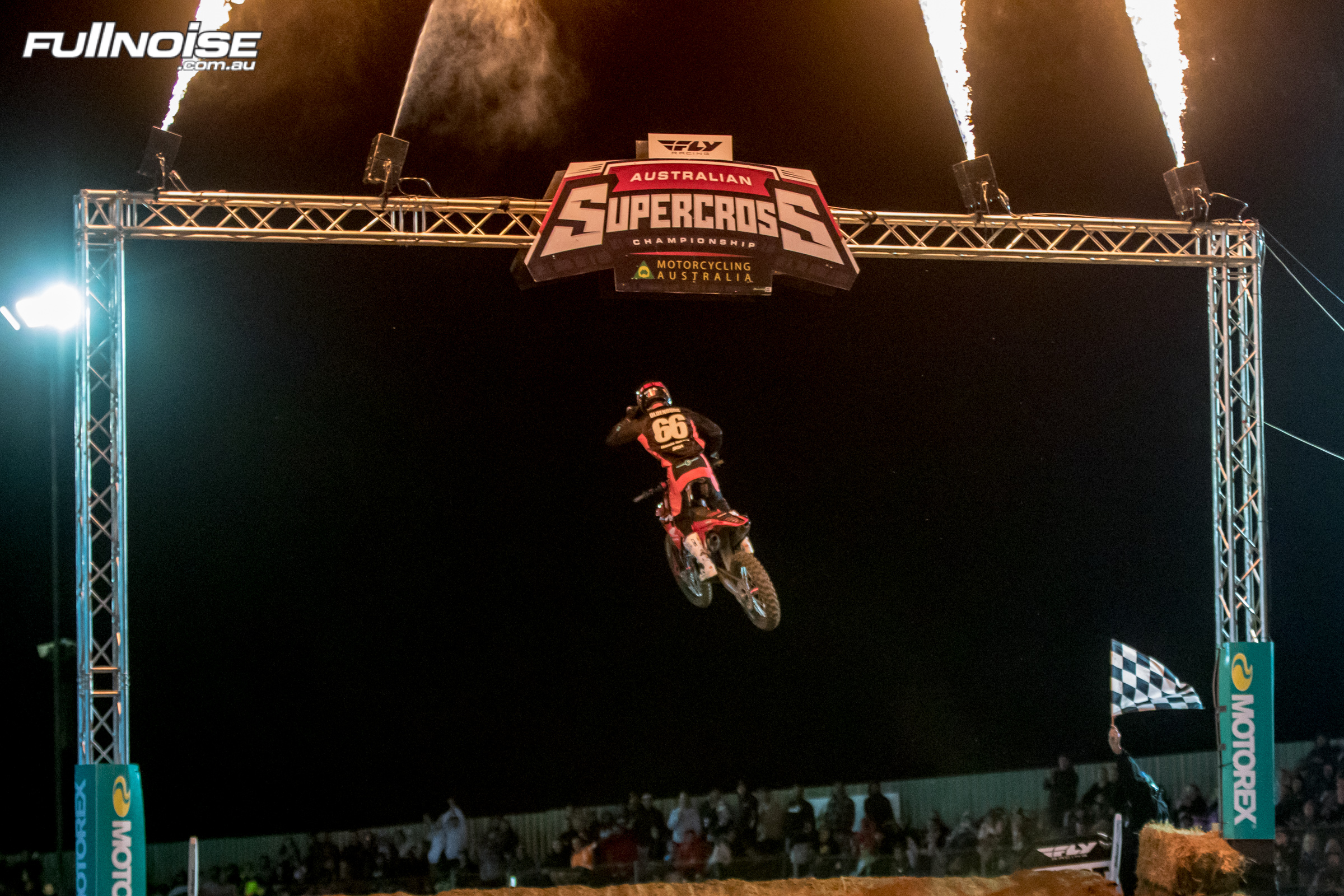 Mitchell Oldenburg was on fire all day long and ran away for a comfortable win in the main - Credit: Aaryn Minerds
SX2 qualifying saw Penrite Factory Honda Racing Team's Mitchell Oldenburg clock the fastest lap of 44.819 ahead of fellow American Jacob Hayes who took his Serco Yamaha YZ250F to second fastest, .277 seconds ahead of Penrite Factory Honda's Chis Blose, Blose making it an all American top three clocking a 45.619 for his best effort in the ten minute qualifying session.

Round one winner Josh Osby took a comfortable win as the SX2 heats got underway with the American leading from gate to flag. Jacob Hayes followed Osby across the line a second and a half in arrears while Australian Motocross Champion Wilson Todd found some form to finish third.

Heat two of the SX2 class saw Penrite Pirelli CRF Honda Racing's Rhys Budd lead the opening lap before falling to Aaron Tanti who intern was demoted by Oldenburg. From there Oldenburg controlled the race the flag, Tanti held on for second while Yamalube Yamaha Racing's Jay Wilson rounded out the podium. Budd eventually finished fifth. 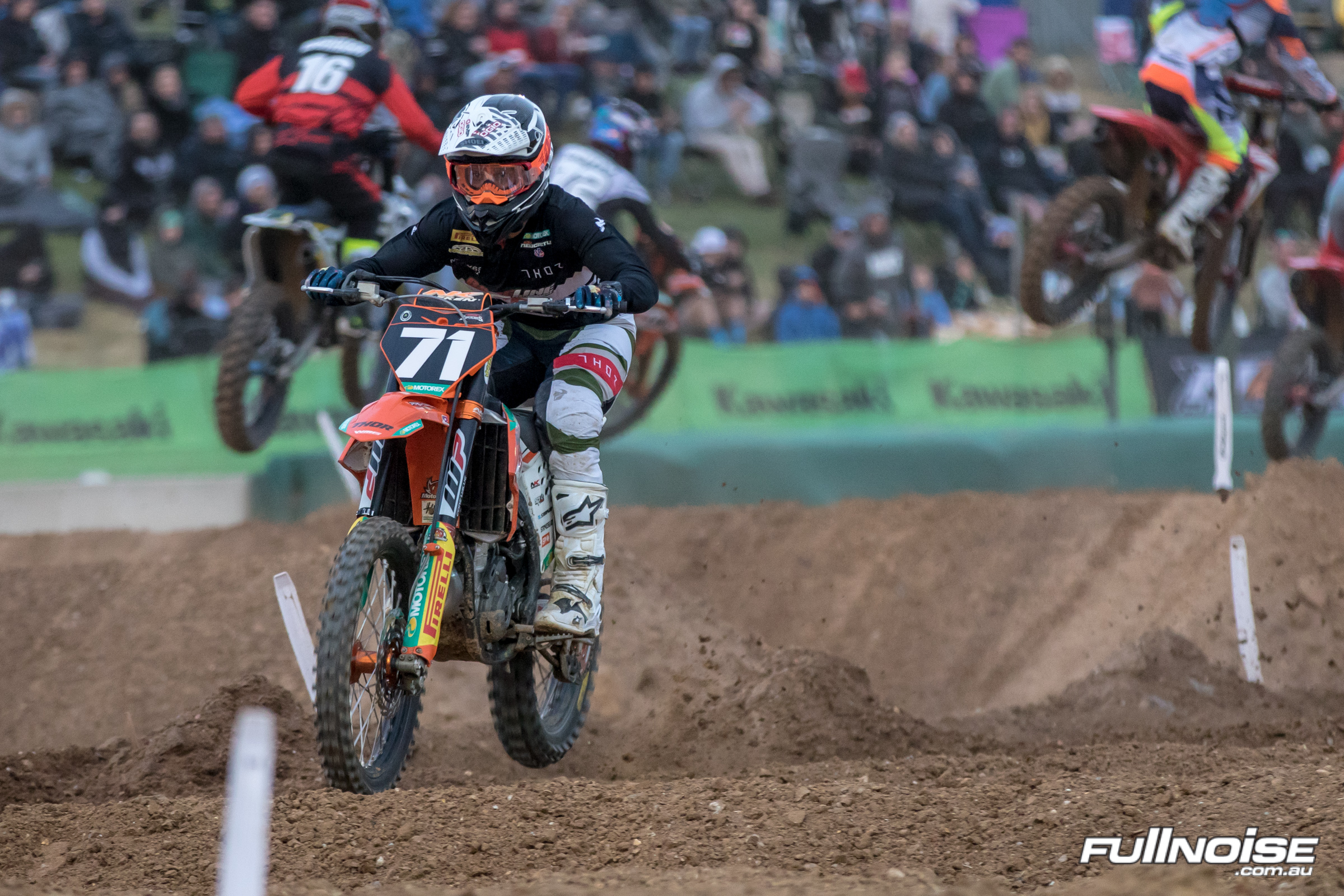 Joshua Osby fought all the way to the end to steal away second spot in the main event on the final lap of the race - Credit Aaryn Minerds
The fifteen lap SX2 main event saw Wilson Todd shoot out to an early lead ahead of Josh Osby and Mitchell Oldenburg. One of the heavy favourites, Chris Blose, went down in the opening lap and would have to fight his way back from stone motherless last!

Oldenburg worked his way into the race lead by lap three and set about opening up a race-winning lead while all sorts of carnage unfolded behind him.

Hayes and early race leader Todd both had their nights come to an abrupt end at the same time, on the same straight but in separate incidents. While Hayes was able to get up under his own power eventually, Wilson Todd was carried off the track in the hands of Racesafe.

Todd was solid for the first two laps, but Oldenburg was in top form and had found his way into the lead of the race by lap three. From there he would go on to lead the following thirteen laps and take a strong 7-second win. This left the battles for the podium placings. 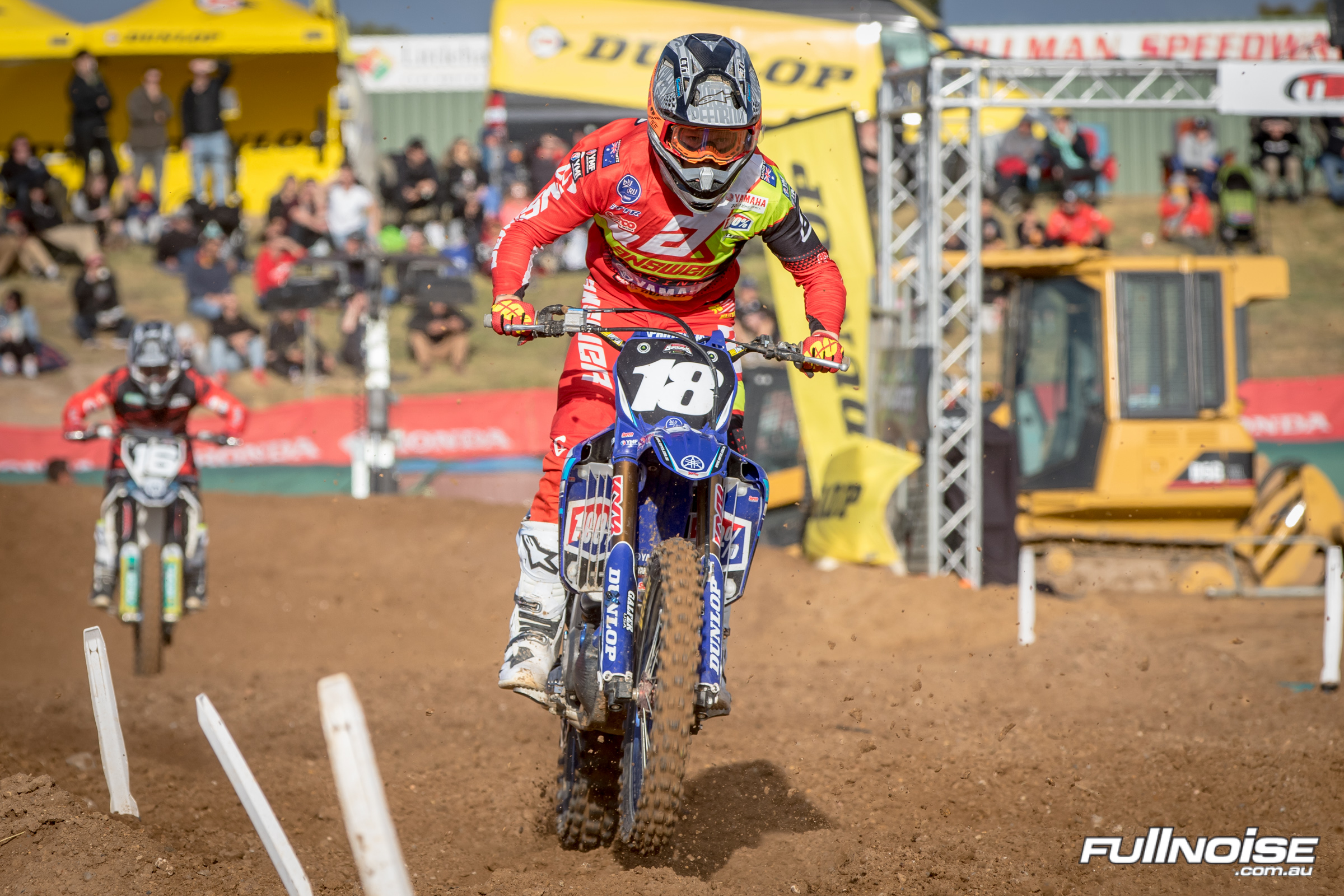 Aaron Tanti continued his fine form, moving forward to second position in the main, before finishing third and also taking the SX2 championship points lead - Credit: Aaryn MInerds
With Hayes and Todd out of the race, Jay Wilson was elevated to third position, just behind Osby who had a solid hold on second place for the next few laps.

Tanti and Wilson would exchange third position on a few occasions before Tanti got the upper hand and then set his sights on second-placed Osby, a feat he was able to achieve within a few laps.

Meantime Chris Blose was not mucking around, and by lap nine had moved into sixth place after clawing back fourteen places.

Out front, Oldenburg was in top form leading all but three laps to take a strong 7-second win and in the process lifted himself into championship contention after a tough opening round in Brisbane.

With the race winding down there were still a few flurries as Osbyu was not happy with third and wanted that second place. He and Tant went at it on the last lap with the American getting his second spot on the podium. 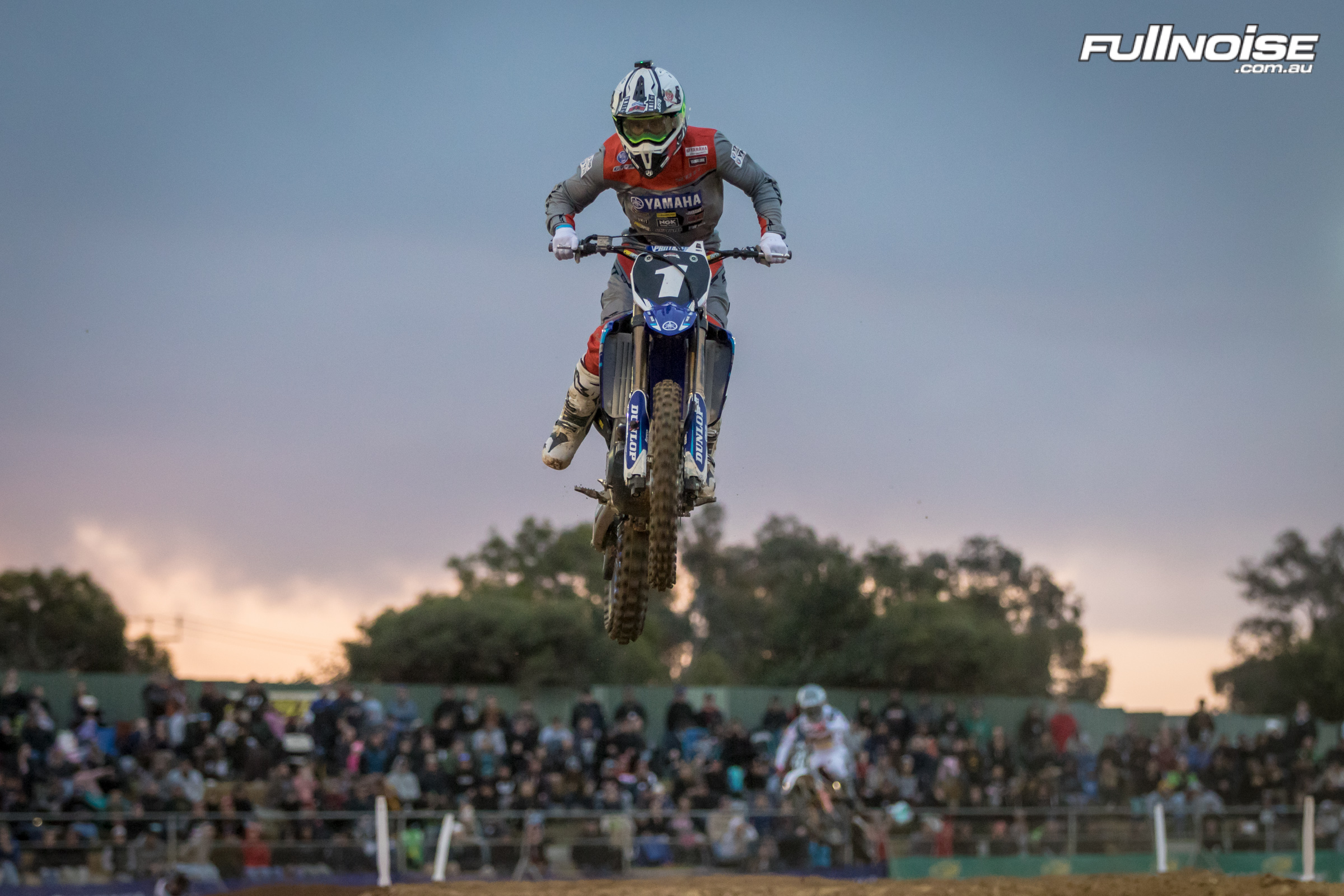 Jay Wilson was strong on his way to a 4th place finish for the round - Credit: Aaryn Minerds
Tanti had to settle for third; however, that was enough to elevate him to the championship lead after round two, two points ahead of Osby, with Oldenburg jumping up to third.

Jay Wilson had a solid result with fourth while Blose clawed his way all the way back to fifth after a couple of passes in the final laps.

Raceline KTM's Regan Duffy showed he has the Supercross skills to match his outdoor talent, finishing the race strong to come home in sixth, just ahead of Yamaha backed privateer Connor Tierney who rebounded from the disappointment of round one to show what he can do.

Another privateer in the form of Tomas Ravenhorst finished 8th, just ahead of Empire Kawasaki's Bradley Taft who came from the rear of the field after an early-race crash, while Davey Motorsports KTM pilot Dylan Wills rounded out the top ten after an intense battle with Rhys Budd. 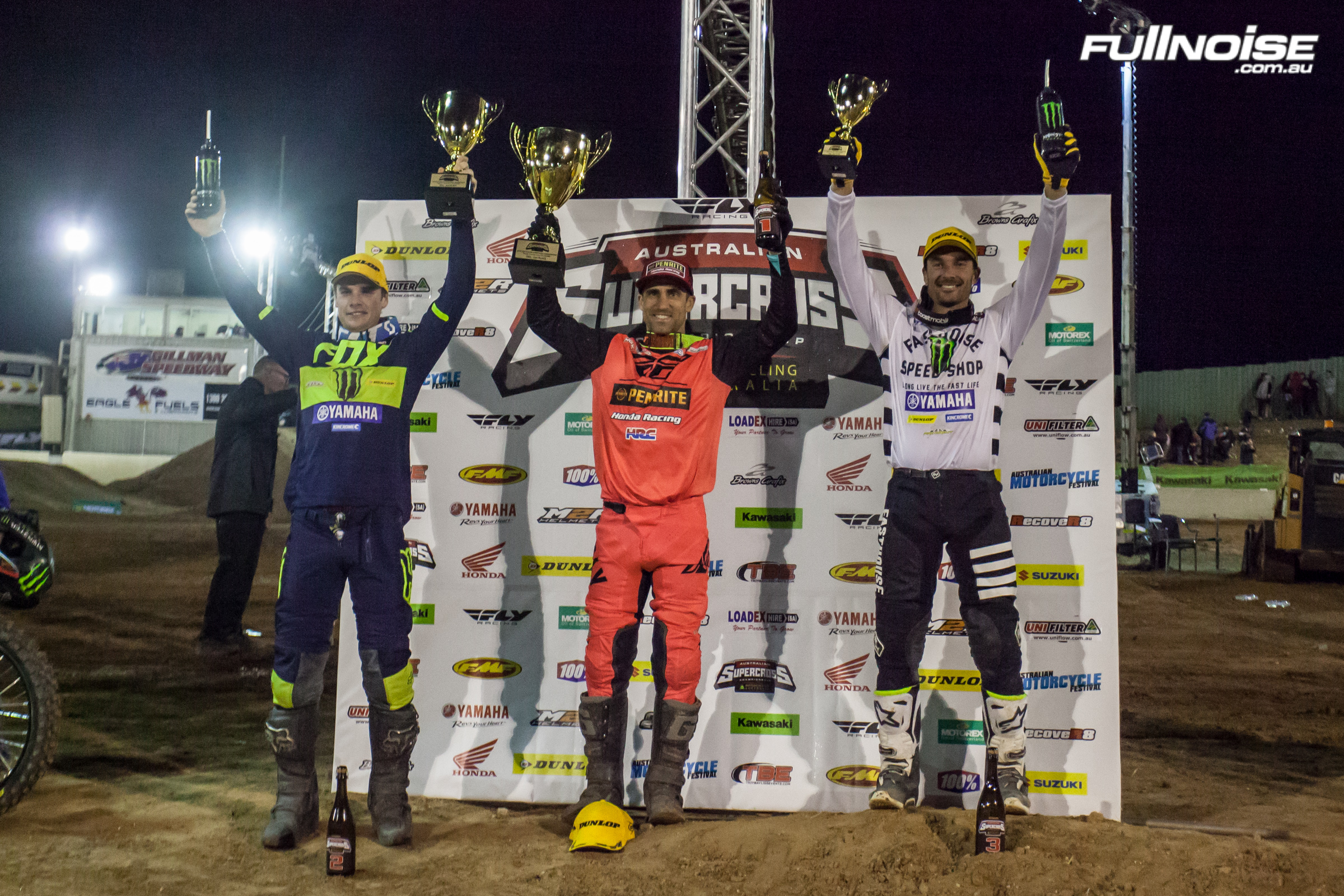