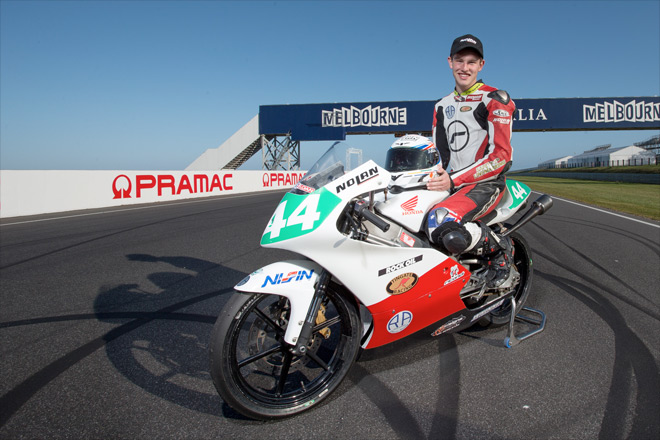 It wasn‰Ûªt until the final chequered flag was raised that he knew it, but Tom Bramich (Ron Angel Classic Racing) was crowned the Honda Moto 3 / 125GP Champion today at the final round of the 2015 Yamaha Motor Finance Australian Superbike Championship presented by Motul Pirelli.

In the tightest class of the series, Bramich finished the final race of the round three positions higher than rival Brian Houghton (K1 Racing), to win the crown by six points.

While Matthew Barton (CB Racing) claimed the round win, Bramich finished the event in second overall ahead of Lachlan Kavney (K1 Racing) and Houghton.

With only five points separating Houghton from Bramich in the championship, there was an air of anticipation as riders moved onto the grid.

Off the line it was Victorian Barton who claimed the race lead, from Kavney, Bramich and Houghton.

Kavney moved into the lead towards the end of the first lap, while Ted Collins (Peter Stevens) moved into second spot after passing Barton at Honda corner.

He couldn‰Ûªt hold it for long though, and as Barton and Houghton passed him he was pushed back to third ‰ÛÒ with Bramich working hard in fifth.

Barton reclaimed the race lead coming down the straight into the third lap, and the Honda rider began to extend his lead.

Bramich soon moved ahead of Collins into fourth and set about getting in front of Houghton ‰ÛÒ as the championship battle intensified.

He passed Houghton at Siberia on lap four into third position, and the pair jostled over the ensuing laps.

Ahead of them Barton was still leading the way, with a half second lead over Kavney at the halfway point, but Kavney couldn‰Ûªt maintain position slipping back to fifth.

Houghton moved into second but had less than a second lead to fifth spot, and shortly after Bramich made the move at Siberia into second position.

Coming into the final lap just 0.080 of a second separated second and fourth and it was anyone‰Ûªs guess what would happen.

Barton rode on to claim an emphatic 5.329-second win, with Bramich resolute to claim second from Collins and Houghton.

And heading into the final race, that meant the gap between Houghton and Bramich in the championship was cut to just two points.

In the final race for the class it was Kavney who got the best start, moving into and then extending a healthy race lead.

Behind him, Houghton, Barton, Bramich and Collins were all neck-and-neck, jostling for and exchanging positions.

Over the next few laps Houghton, Barton and Kavney all took turns in the lead with Bramich 1.589 seconds back in fourth and needing to make it all happen to finish ahead of Houghton.

By the halfway point of the race he closed the gap to be just 0.317 of a second behind Houghton, and all of a sudden we had an incredible championship battle on our hands.

Bramich passed Houghton on lap six, but it was anyone‰Ûªs guess what was to happen from there.

On lap seven Houghton ran off the track and re-entered in fourth place ‰ÛÒ his championship dreams fading before his eyes.

With Houghton 8.209 seconds behind and Bramich moving into the lead it looked written in stone.

But a mistake from Bramich pushed him into third (and provisionally second in the championship) before he moved back up to second.

With one lap remaining the top three riders crossed the line in a row, and Bramich only needed a top-two finish to seal the title.

Not content with second, the young Victorian rode on to record a historic race win and claim the Championship title ‰ÛÒ with Kavney taking second, Barton in third and Houghton resigned to fourth.

"I can‰Ûªt believe it after Friday, from looking at the sky on turn two to coming away with the championship win." Bramich said. "I just don‰Ûªt know what to say and I‰Ûªm just so thankful for all the people around me that supported me the whole year.

‰ÛÏAfter yesterday we had a disastrous fifth I think it was, so all the pressure was on him (Brian) and I just had to do my best.

‰ÛÏAnother Australian title next weekend hopefully on the Ron Angel 500 at Mallala so we will see what we can do there!‰Û 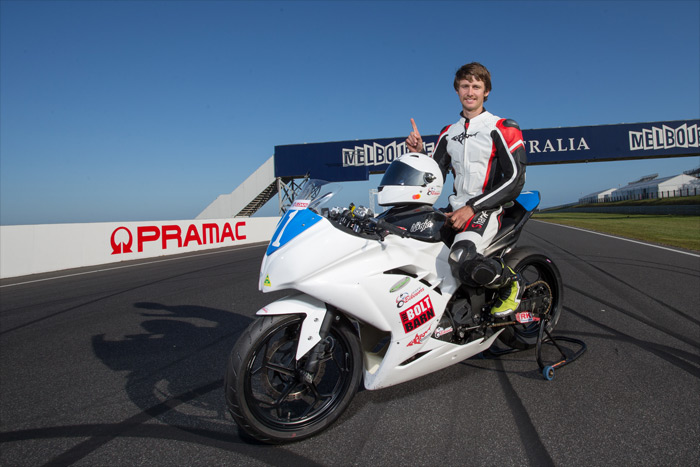 Hall took advantage of his big lead in the class coming into the final round at Phillip Island, to finish the series 17 points ahead of Race Centre‰Ûªs Drew Sells with Marais a further 29 points back in third.

In the Women‰Ûªs class, Marais edged out Ilish Ross (Chas Hern Racing), who despite taking maximum points at the Island, lost the overall championship on a countback.

Sells got the ideal start off the line and moved into the race lead as series leader Hall moved into second, Robbie Menzies (Australian Outdoor Living) into third and Josh McHenry (Peter Stevens ‰ÛÒ Geelong) into fourth.

Zack Johnson (Johnson Racing) moved up into fourth by the end of the opening lap as the battle between the top riders remained tight and intense.

On the second lap of the eight-lap race, Johnson moved into the lead ‰ÛÒ as Hall dropped back to fourth behind Sells and Menzies.

The Women‰Ûªs championship in the Production class really began to heat up in this race with Ross three positions ahead of series leader Marais.

Sells passed Johnson on lap three of the race and at the half-way mark less than half a second separated the top four riders.

As the battle intensified it was Johnson who made the first mistake, as he went down on the penultimate lap at the bottom of Lukey Heights.

Sells held on for a well-deserved race win making it two from two for the weekend, with Menzies claiming third spot and McHenry holding on to fourth.

Ross finished the race in fifth position, and with Marais only managing ninth overall (and second in the class), the gap in the Women‰Ûªs Championship heading into the final race was reduced to five points.

The race result handed Hall a 20-point series buffer over Sells leading into the championship decider.

Sells started on pole position in race two but got off to a poor start as both Menzies and Hall moved past him and into the top two positions.

However, when Hayley Green (Chas Hern Racing) crashed at turn two, the red flag was drawn and a full race restart was called.

At the restart it was McHenry coming off the second row and moving into the lead, from McHenry, Hall and Sells.

At the end of the second lap in the seven-lap race, Sells had settled into second with Hall in sixth ‰ÛÒ the latter looking content to just finish the race knowing it would clinch him the title.

‰ÛÏIt is certainly my greatest achievement so far in Road Racing ‰ÛÒ it has been a bit of a tough year, but eventually I got here!" Hall commented.

‰ÛÏI felt the pressure ‰ÛÒ I wasn‰Ûªt sure which way I should go, but kept on the smart road and just kept in the top four the whole time and was able to get there with points.

‰ÛÏIt is certainly an achievement to know that I was consistently better than the rest over the year.

‰ÛÏI think I will have one more year on this bike and then that will probably be it ‰ÛÒ I will probably run out of money by then!

Menzies, Sells and Johnson finished three laps with a 0.086 gap between them, and the trio swapped positions numerous times over the next few laps.

Hall moved up into fourth, while Ross and Marais were in a battle for the women‰Ûªs championship in eighth and ninth.

At that point in the race, Marais only needed to hold her position to claim the Production outright third place on the podium, as well as the Women‰Ûªs title.

Sells moved into the lead on the final lap of the race but had to settle for second place as Menzies rode through to claim the win ‰ÛÒ Johnson in third and Hall in fourth.

Marais did manage to do enough to not only claim the 300cc podium place, but also beat Ross to the Women‰Ûªs title on a countback.

‰ÛÏI am pretty stoked ‰ÛÒ it is my first championship ever and we are pretty happy to finish this year as we never expected to go this well." Marais said.

‰ÛÏIt was intimidating at Phillip Island ‰ÛÒ conditions were very mixed and coming from Perth where we have done our home track a million times, but this is everyone‰Ûªs home track over here.

‰ÛÏSo learning something new was pretty good and being on a world class circuit has its perks ‰ÛÒ knowing that the same rubber we put down, athletes like Valentino Rossi have done the same, so it has been a great experience.‰Û