Brake problems make it a tough night for Eli Tomac 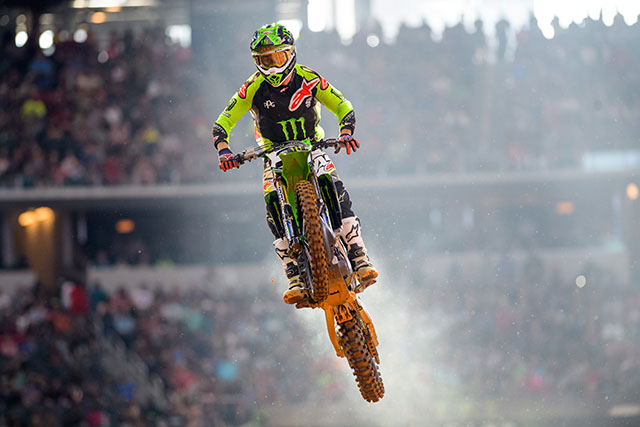 The Monster Energy Kawasaki team pulled into AT&T Stadium for Round 6 of the 2017 Monster Energy AMA Supercross, an FIM World Championship season with Eli Tomac focused on his championship battle with points leader Ryan Dungey.

Tomac started the day as the fastest qualifier. A crash in his heat race saw him have to qualify through the Semi, which he won convincingly.

At the start of the 450SX Main Event Tomac rounded the first turn inside the top ten and began working his way through the field. As the race heated up, Tomac worked his way into third position. While in third, his front brake locked up, and as a result went down and was forced to pull into the mechanic‰Ûªs area for repairs.

After some deliberation his mechanic eventually ended up cutting the break line. Tomac reentered the race and fought until the end. As the checkers flew, Tomac scored valuable Monster Energy Supercross Championship points, earning 15th place and 6 points.