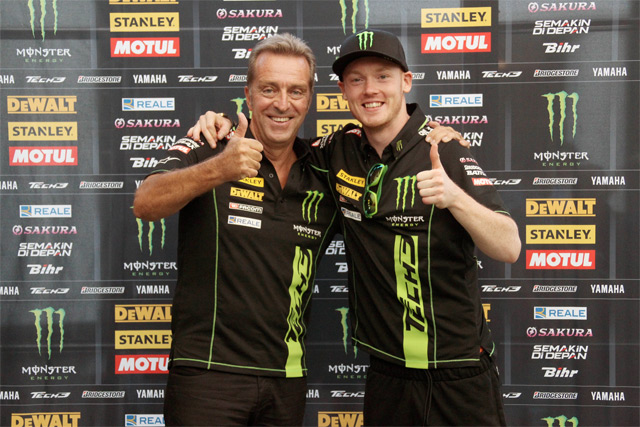 Bradley Smith and the Monster Yamaha Tech3 Team are delighted to have reached an agreement that will see the British rider remain with the team for the 2016 season aboard the Yamaha YZR-M1.

The contract extension comes as Smith is currently undertaking his most successful MotoGP season to date, where he has finished no lower than 8th so far. Furthermore, he stands in fifth position and at the head of the satellite rankings in the championship after some highly impressive performances.

Next season will be the British stars fourth season in the premier class with the Monster Yamaha Tech3 Team and his sixth in total after joining the Tech3 Racing Moto2 Team in 2011. In his first term in MotoGP, Smith finished collecting more points than any other British rookie and he followed that success with another hard fought campaign in 2014 with a personal highlight of a superbly executed podium at Phillip Island.

"Obviously, I am really pleased to be able to continue this journey with the Monster Yamaha Tech3 Team and it's fantastic news to resign for another season." Smith said. "We will be going into our sixth year together and I must say that it is certainly nice to be giving the guys the results and performances that they deserve at the moment.

"So far in 2015, I have been finishing where we want to be which is very positive, as I'm sure that I am in debt to them for the first two years in the premier class! Everyone in the team has put their faith in me again and we know that 2016 will be tricky due to the changes in regulations, however, I am optimistic that this will give the satellite riders more of a chance to be competitive.

"Therefore I am confident about going into next year, as I know that everything will be fairer so we will continue to work together and we fully intend to take our sponsors onto the podium. 2016 will be exciting and I am more than pleased about being able to ride aboard the Yamaha YZR-M1 and with the Monster Yamaha Tech3 Team."

Furthermore, the Briton was part of this year's Suzuka 8 hour conquering team with Yamaha Factory Racing who won the elite event after 19 years. Smith will now focus on the remaining rounds in this season and will seek to battle as close as possible to the Factory MotoGP bikes before aiming to challenge for podiums in 2016 aboard the Yamaha YZR-M1.

"I am super happy and proud to finally announce that Bradley Smith will remain with our team for one more year." Team manager HervÌ© Poncharal added. "Brad will hold the record with Colin Edwards for the amount of time in the premier class with Tech3, which is four years and this shows that he will be a very important rider in the team's history.

"Of course, he deserves to be given the opportunity by the team together with Factory Yamaha to ride an M1 for another season after having had a fantastic first part of the year. In addition, the incredible win that he achieved with Pol and Nakasuga at the Suzuka 8 Hours was really impressive and he made us proud.

"Now we hope that the fact that his future is sorted will give him a big boost for his upcoming home GP and I am sure that he is going to be even stronger in the final rounds of the 2015 season compared to what we have seen so far."