Brad Freeman Breaks Through For Debut Win at Estonian GP 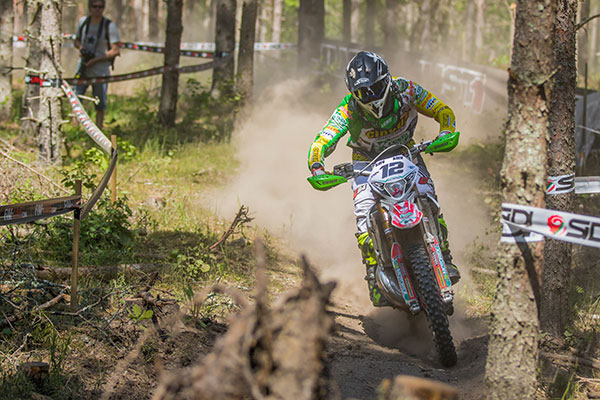 Brad Freeman on his way to his first EnduroGP win at the Estonian GP.
Day 1 of the Estonian EnduroGP, held under sunny skies and summer weather, had a surprise in store in the shape of 2017 Junior World Champion, Brad Freeman who has undoubtedly been the big surprise of the early part of the season.

The protege of Jarno Boano has impressed everyone since the beginning of the season with his speed and his very positive attitude. Whether in the cold and snow of PÌ_ijÌ_nne (Finland) or the dust of the GP of Portugal, the Brit has been sporting as well and always sporting a smile!


However, on the Cross Test of Tallinn and Maardu, the youngster from Staffordshire hardly had time to catch his breath on the way to his debut win. Especially as fellow countryman Steve Holcombe launched an attack with his usual determination and led the race at the end of the first lap, where Christophe Charlier and Yamaha's Jamie McCanney both fell heavily and lost a lot of time. While Holcombe led the dance, Freeman, Alex Salvini and Eero Remes were in ambush, meanwhile the rest of the pack were irretrievably outpaced by this flying quartet.

The long Enduro test which lasted more than 10 minutes would once again prove to make the difference, while Holcombe continued to lead the way at the end of the second lap by 7 seconds ahead of Freeman, fatigue started to creep in - Holcombe fell twice on the ET3 while Freeman opened the gas and took control of the race.

The Englishman wasn't seen again after that and he won the EnduroGP class on his 4th outing in the Senior ranks!

"I'm really happy... a few months ago I was looking up to and admiring all these riders from the side of the stage, and now I'm winning and finishing in front of them!" Freeman reflected, "It's really something I never imagined happening this early in the season!" 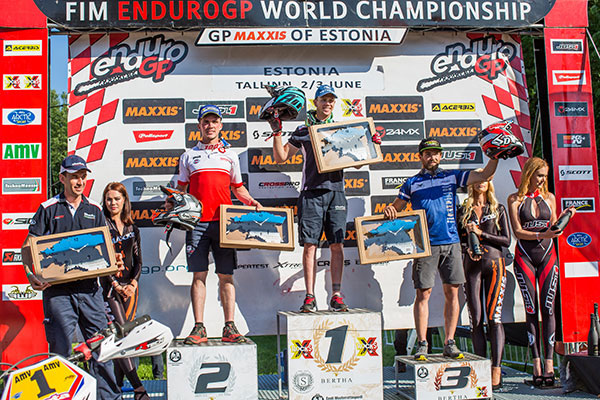 The E3 Podium of Steve Holcombe, Jamie McCanney and Antoine Bassett
The tough and determined Eero Remes didn't hold back, and the similarities which Estonia and Finland share allowed him to finish the race with a double podium - in class and in EGP. In fact, the Finn was so fast that he demoted Holcombe and snatched second place overall on the last two tests - proof of his fighting spirit.

Alex Salvini also continued his strong form, but he was forced to finish behind Steve Holcombe, by less than a second! Steve Holcombe was slightly disappointed as he has still not won a single day in the EnduroGP class this season.

"I'm a bit down physically, and I crashed twice in Enduro Test 3," Holcombe explained. "But my physical condition in general isn't great at the moment because of a rib injury that I've been carrying. Anyway, it's a very nice race and a nice lap to ride.‰Û 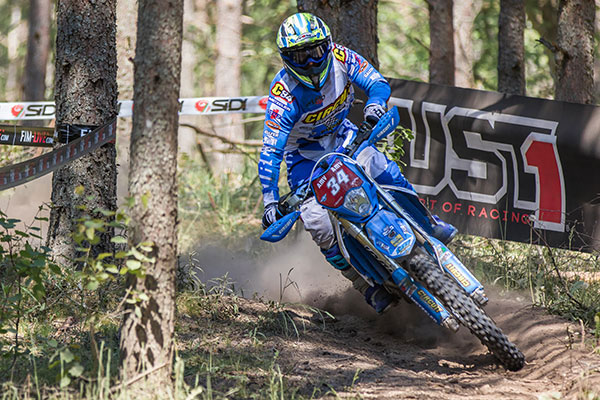 Eero Remes took a double podium for the round with the Enduro 2 class win
It goes without saying that Brad Freeman was the winner in Enduro 1, in front of Jamie McCanney and Antoine Bassett. Promising former motocrosser Alex Snow was 4th in class.

Thanks to his great pace at the end of the day, Eero Remes won the Enduro 2 class ahead of his big rivals Alex Salvini and LoÌøc Larrieu, while Thomas Oldrati is getting closer and closer to the "box" at each event.

Steve Holcombe was not worried in E3, despite the great race from Manxman Danny McCanney, a brilliant second again, while Anthony Geslin found his way back on the podium after dispatching of the "elder statesman‰Û 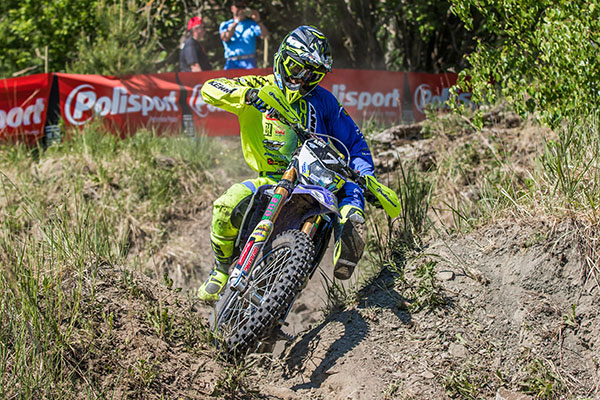 Theo Espinasse did the double in the Junior classes