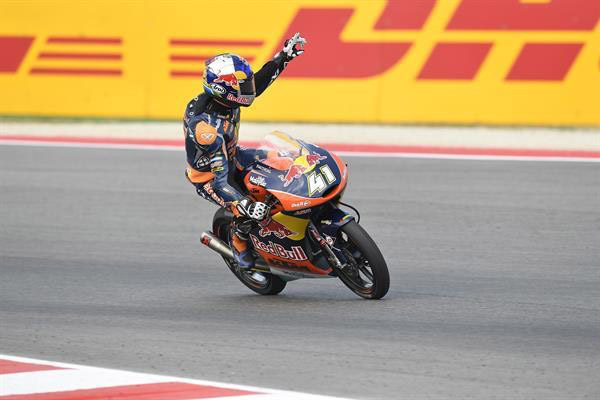 Red Bull KTM Ajo‰Ûªs Brad Binder put in another masterful tactical race on the Misano circuit on Sunday to take the Moto3 win at the MotoGP of San Marino and leave Italy with a staggering 106-point lead in the World Championship.

Brad Binder's closest rival and local rider Enea Bastianini fought a tough race with the South African and took the challenge all the way to the final lap. KTM rider Joan Mir of Spain finished third in front of came out ahead of Italy‰Ûªs Nicolo Bulega (KTM) in what was a tight two-way battle for the final podium place. Andrea Locatelli and Philipp Oettl rode their KTM RC250 GP bikes to places 6-8 to give the Austrian brand five of the top ten finishers.

Although the points gap will now be difficult to bridge, Bastianini has moved into second place to be Binder‰Ûªs closest rival after Jorge Navarro failed to finish for the third consecutive round but the Spaniard remains third in the points.

‰ÛÏFrom about lap four and five, when everyone was close up behind me I just pushed and tried to keep my rhythm consistent." Binder, commented in the finish area. "I saw we had broken away from the second group and I had a little look behind me and there was just Mir and Bulega behind us.

"With five laps left I let him (Bastianini) have a go at the front and we lost more than half a second a lap. So I just waited for the last lap and made sure I got it done."

Binder started the race on pole, but it was Bastianini, a winner here in 2015 and riding in front of his home crowd, who was fastest off the line. Then Binder took the lead in the second lap and the two settled down into what evolved into a two-man fight for the lead. Bastianini took the advantage from time-to-time in the opening laps of the 23-lap race, but by lap six the South African controlled the action until he relinquished the lead with five to go.

Then in tactics that have become very familiar as the season progressed, Binder shadowed the Italian while be made his decision where to attack in the last lap.

The top riders nine riders were only about six tenths of a second apart in the first nine laps but as action progressed the leading pair broke away while behind them Mir and Bulega, riding together, fought it out for the final podium place.

Misano was a disappointing race for Binder‰Ûªs teammate in the Red Bull Ajo team. The Dutch teenager Bo Bendsneyder, who took a career-first podium in the previous round exited in the early stages.

Navarro‰Ûªs unfortunate exit in the ninth lap put Binder‰Ûªs title chances in the spotlight but 125 points are still up for grabs from the five remaining rounds, three of which are overseas. Following the next round at Aragon, teams depart for Japan, Australia and Malaysia. They then return for the final round in Valencia, where the Red Bull KTM MotoGP Factory Racing Team will race the new KTM RC16 MotoGP bike as a wild card entry. The factory team will race the premiere class from 2017.