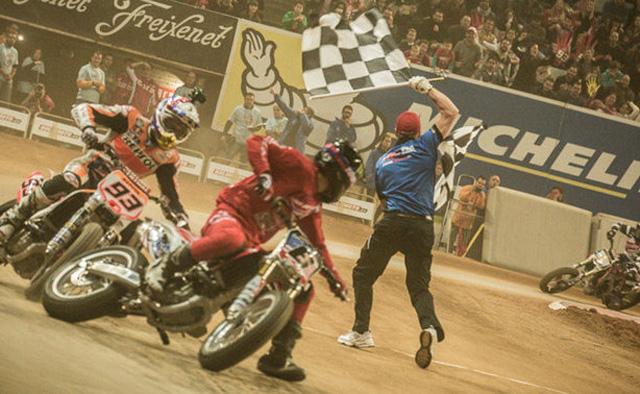 The victory for Baker, winner of the first Superprestigio Dirt Track in January 2014, came as the American saw off a stiff challenge from Marquez, winner of the second edition in December 2014, in front of 8,700 fans.

Baker's win means the balance of victories has swung back in favor of the Americans, with two wins to Europe's one. Marquez and Mees joined Baker on the podium after a Superfinal which also featured Alex Rins, Dani Ribalta, Xavi Vierge, Masatoshi Ohmori and Fredrik Lindgren.

"It's been incredible, I've been in Barcelona for so many days that I feel like this city is my second home!" Baker enthused. "I get along so well with everyone here, it's fantastic.

"It's been a crazy year for me, one year ago I was in the hospital with a broken shoulder, and now here I'm with a new victory.

"The SuperFinal has been brutal! Mentally it has been very demanding; I did look back only once. Every time I heard the crowd louder I knew Marc was coming closer. I want to thank RPM Racing for all their support and help throughout these days"

The race had its memorable moments. At the start - crucial in dirt track - Baker took the advantage over the other riders; an advantage that Marquez reduced over the 16 laps as the Spaniard looked to attack in the closing stages.

The rider from Cervera almost went past at the last corner, but was forced to settle for second place, just one tenth of a second behind Baker. Mees was left to make up for a lackluster start and finished the race in third position, completing an exclusive podium.

"Thanks to the organisers for putting such a great event together, every year is getting bigger." Marquez commented. "It wasn't my best start, I regain some space at the beginning, but it wasn't an easy task to overtake Brad.

"All in all is a great race, and it's fantastic to be in the podium with these two amazing riders, looking forward to come back next year"