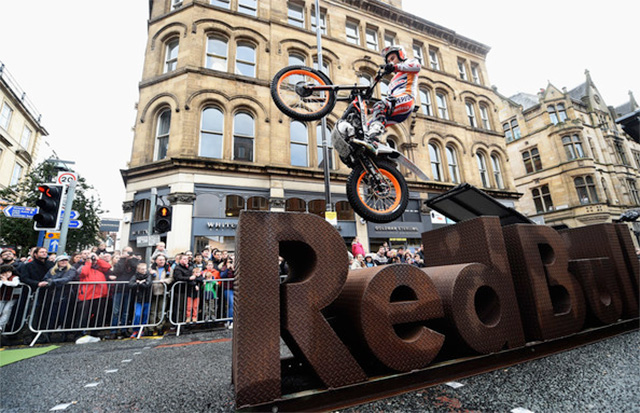 Debutant Bou was undefeated over the four rounds throughout the day to run out an easy winner as he showed his skill and speed across the uniquely designed and built linear dual lane course.

Behind Bou, the competition was fierce and close between the remaining seven invited World class riders for the last two podium places as just four points separated second to eight spot after sixteen heats, eight semi finals and four main events. Thanks to strong showings in the final round of the day it was the British duo of James Dabill - Beta and Michael Brown - Gas Gas respectively who were eventually occupied the rostrum step beside Bou.

Such was the depth of quality as the Red Bull City Trial returned to Manchester for a third year in succession, albeit in another new location this time around, vice FIM Trial World Champion Adam Raga - Gas Gas and 2013 event winner Jeroni Fajardo - Beta could only manage fourth and fifth positions respectively in front of the huge crowds that lined the hundred metre long course.

Event originator and Trial legend Dougie Lampkin - Vertigo who was a podium finisher in Exchange Square last year had to settle for sixth spot on this occasion as Jack Sheppard - Beta and Eddie Karlsson - Montesa rounded out the final order as all the riders delivered a stunning spectacle to the massive main stream audience many who were enjoying the sport of Trial for the first time.

High winds and rain had threatened to disrupt the event, but although wet conditions on the ground made for a slippery opening round, the sun emerged to warm the crowd and to dry the course for the remaining rounds that took place during Saturday afternoon.

Acknowledging its city surroundings this year's course featured a pair of Manchester M's, a section of canal complete with lock gates, a bridge of the region, two huge footballs, a couple of oversized seesaws plus a huge final jump constructed from a tower of local shipping containers. Following a similar format to last year, each round consisted of four heats, two semi finals and a final to determine the intermediate victor. With points awarded to the top four riders each time out, the eventual winner was the competitor who had the highest total at the end of the day.

Speaking about the hugely successful third Red Bull City Trial Dougie Lampkin said. "Once gain this unique has certainly delivered. The street was packed for each of the four rounds with thousands of people getting their first taste of trials. Obviously I would have liked to have made it back on to the podium, like I did last year, but in the end I came up against a tough field of riders."

"Having Toni (Bou) here in Manchester and at City Trial for the first time was a massive boost for the everyone and really helped take the event to the next level. Everyone loves the head to head format, you can tell by the grins on the riders' faces and the smiling people in the crowd that it has been another great edition, which was certainly helped by the sun coming out just at the right time."

Lampkin ended by saying. "It will be hard to improve on today's event, as it has definitely been the biggest and best to date, but I am sure that the team are already thinking how they deliver something even better in the future."