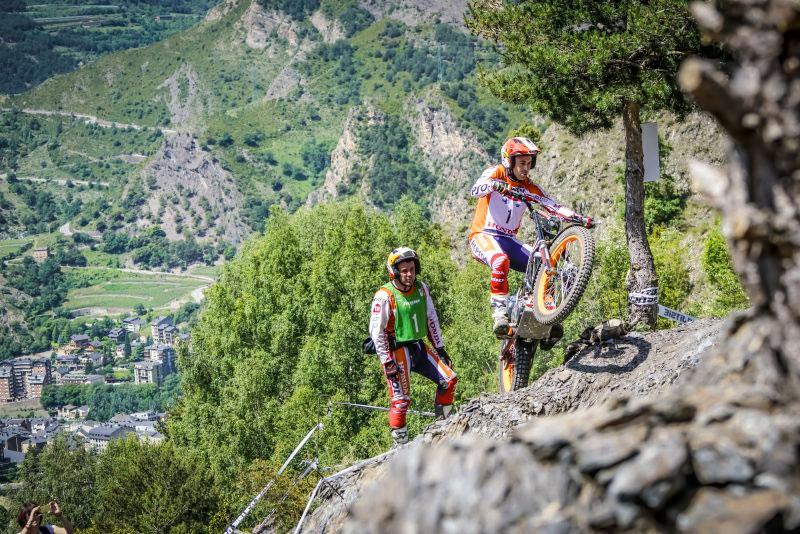 With the majority of sections plotted on the almost sheer, rocky hillside just outside Sant Julia de Loria where the Repsol Honda rider now calls home, the Trial called for courage and commitment in equal measure and at the end of the day it was the defending eleven-time FIM Trial World Champion who kept his cool in sweltering conditions.

The result ties him with British legend Dougie Lampkin on ninety-nine TrialGP victories and paves the way for a possible record-breaking one hundredth win at TrialGP Portugal in one week's time.

"The feeling is incredible because in Andorra it is always very difficult for me and today I think it's the best I've ridden this year," said Bou. "I made some little mistakes on the first lap, but I finally made sure of the win in the last section."


Following a close opening lap it was Bou who led on ten from his fellow Spaniards Albert Cabestany and Gas Gas' Jaime Busto who were tied on eleven with Jeroni Fajardo a further three marks off the pace.

After sharing the wins at TrialGP Japan last time out, both Fajardo and Busto knew victory would hand them the championship lead which only added to the tension.

The entire fourteen-rider field collected maximums on section twelve at their first attempt so it was modified for lap two. Bou needed a steadying dab here the second time around while Fajardo sailed through clean, but both Cabestany and Busto collected fives. 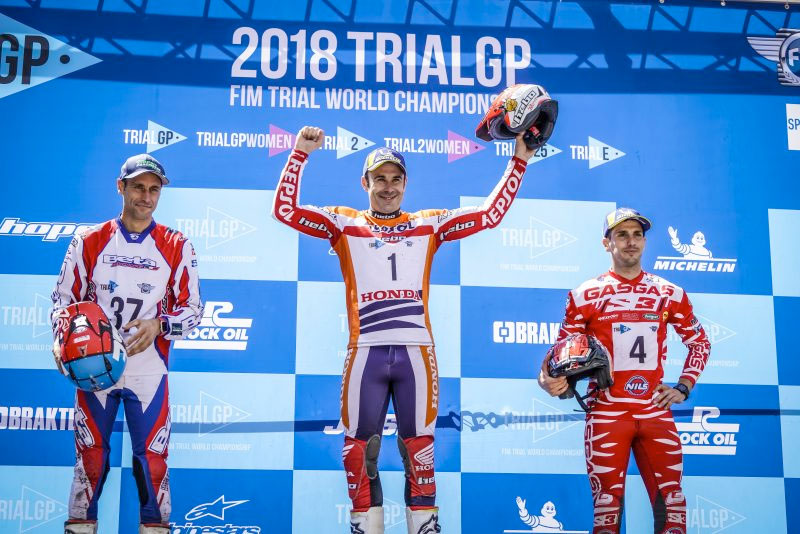 Bou was joined on the podium by previous round winner Jamie Busto and Adam Raga.
The Trial was ultimately won and lost on the very last section of the event, the man-made hazard comprising huge boulders and giant logs in the town's main street that was used for Saturday's qualification session.

Fajardo arrived here on a total of fifteen, one ahead of Bou, with Cabestany on eighteen and Busto out of contention on twenty-four. With his second victory of the 2018 campaign in his grasp, Fajardo - whose sole TrialGP win up until this season had come in Andorra in 2009 - collected a shock maximum on what was a relatively simple section.

With Bou and Cabestany both nailing inch-perfect rides it meant victory went to Bou from Cabestany by two marks with Fajardo slipping to third on a total of twenty.

"I am very happy with this victory here in Andorra. It's been a tough weekend, with lots of nerves and a lot of pressure, but we've finally won," Bou said.

"Today I felt very good on the bike and my back did not bother me, which is very positive to be able to continue improving like that. This is a very important victory both for the championship and for my morale. To reach victory number ninety-nine is impressive and now we have to work to achieve one hundred victories. I keep saying that this will be a very complicated year for me but we will continue fighting," Bou concluded.

Busto was next on twenty-four before a five-mark gap to his compatriot Adam Raga - TRRS who won in Andorra last year, but never really looked comfortable after a shaky first lap.

Spain's Jorge Casales was the next rider home on a distant forty-six, one mark ahead of British rider James Dabill.

The result hands Bou a seven-point lead over Fajardo with Busto a further two points behind as the series approaches the halfway mark.

The 2018 TrialGP series continues in Portugal next weekend. 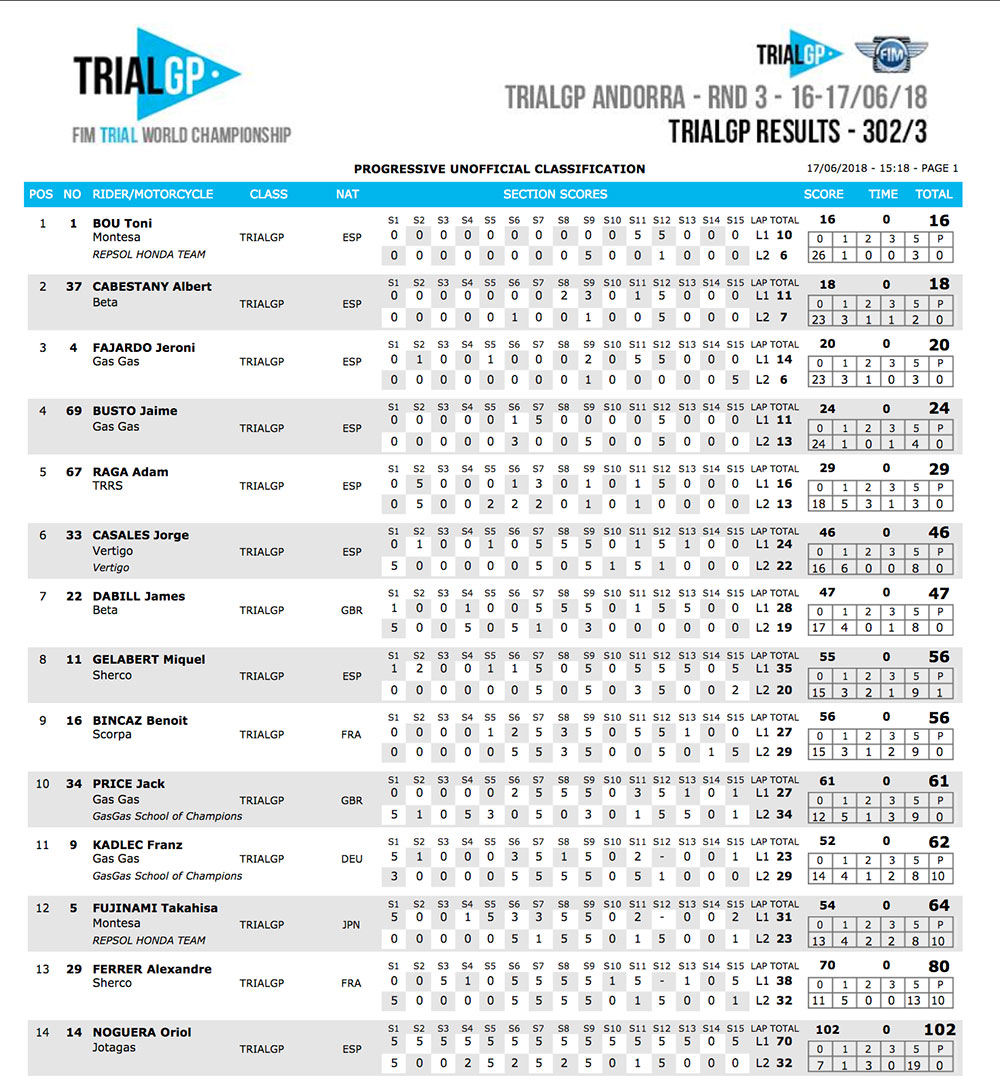 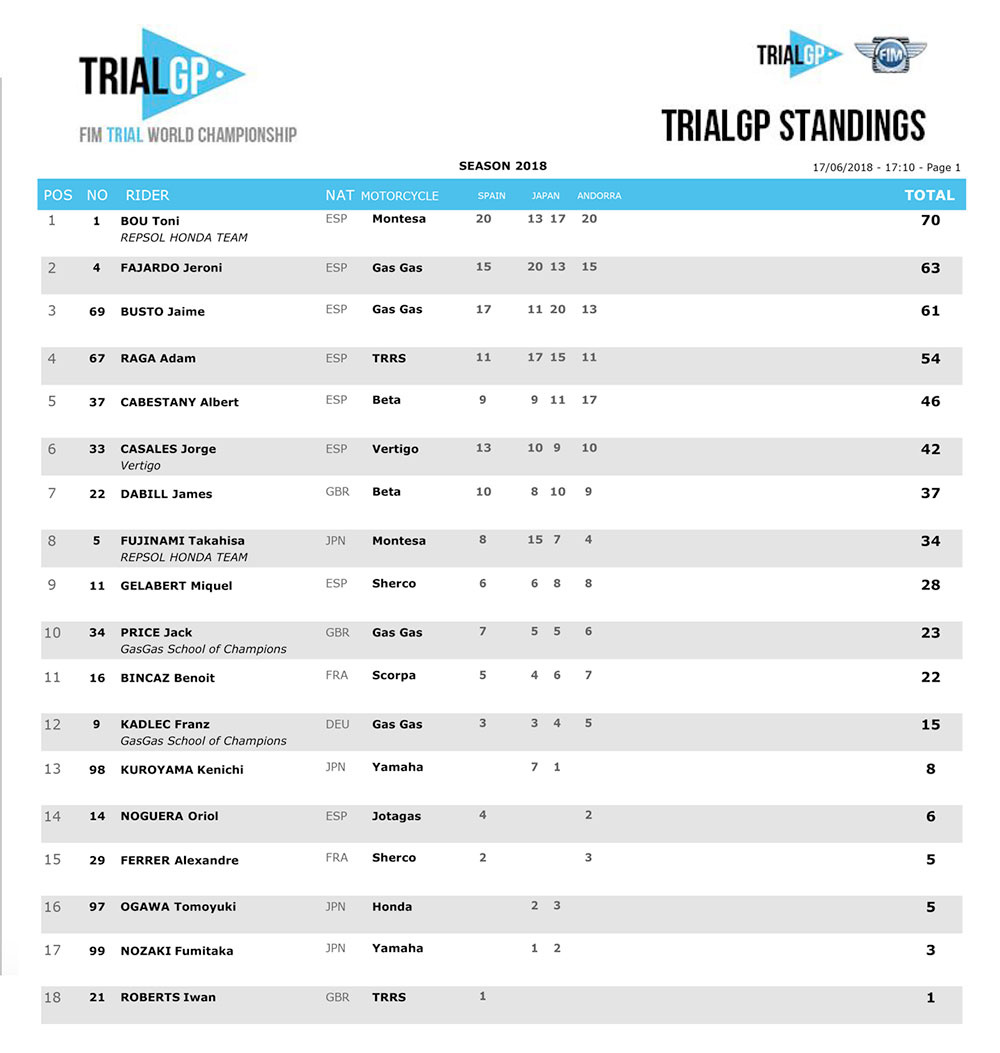