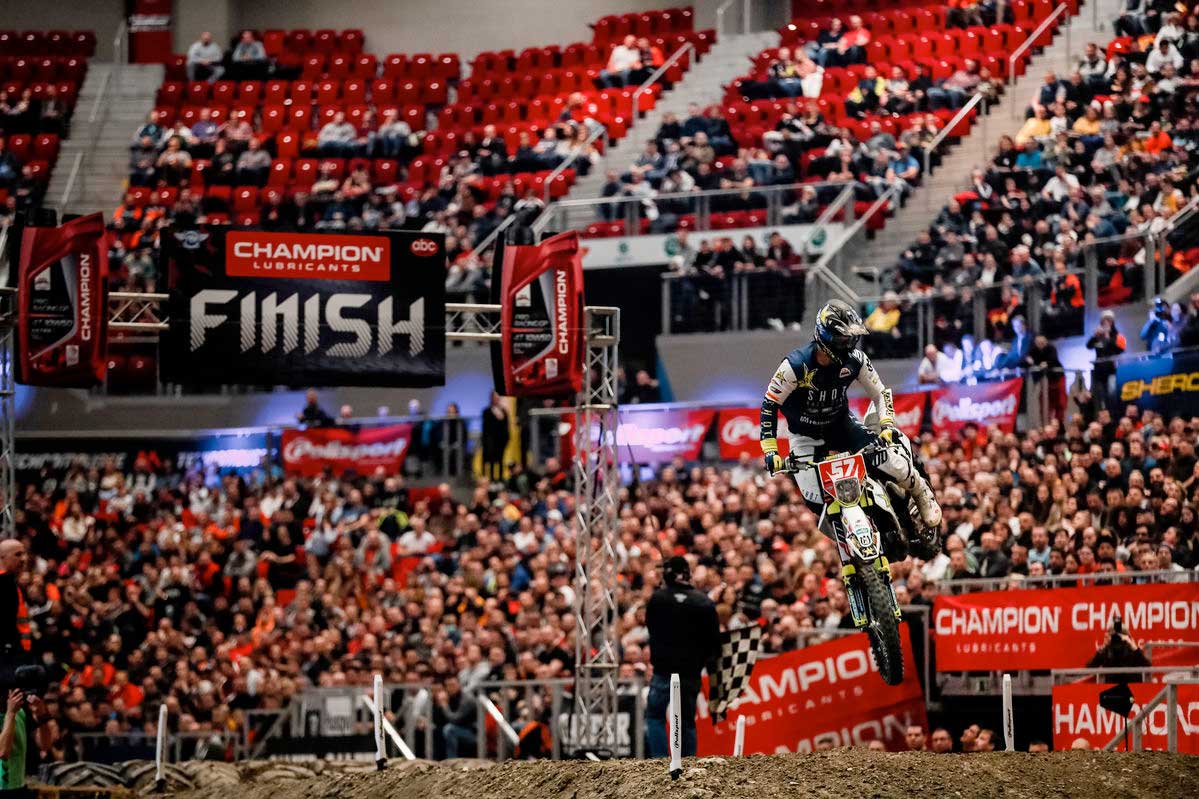 Billy Bolt now holds an 18 point lead in the 2020 championship with one round remaining. Photo: Future7Media
Continuing to cement himself as the rider to beat in the FIM SuperEnduro World Championship Billy Bolt has delivered a winning ride at the penultimate round of the series, in Budapest.

Securing two wins from three starts to take the win ahead of Jonny Walker and Taddy Blazusiak, the Brit extended his lead in the series‰Ûª overall standings with one round remaining.


However, it wasn‰Ûªt plain sailing for Bolt, and the first race of the evening certainly didn‰Ûªt go to plan as several mistakes, including a huge over-the-bars crash, saw him fail to keep pace with Blazusiak and Walker. In fact, Walker impressively dominated the race with his smooth and precise style, gapping the field and leaving Blazusiak to settle for second. Remarkably, Bolt held on to third despite the difficulties, taking important points.

As Race 2 rolled around, Bolt wasn‰Ûªt going to take any chances. Even after a less than perfect start due to the ‰Û÷reverse grid‰Ûª format, Bolt was at the front in a flash. Taddy Blazusiak also suffered a bad start, but as the Pole was also struggling with the bike set-up he found it difficult to make up positions, although a late charge saw him take a hard fought 3rd. Bolt, edging ever further in front of his rivals, won the second race of the night ahead of Walker, Blazusiak and Pol Tarres, who took a great fourth. 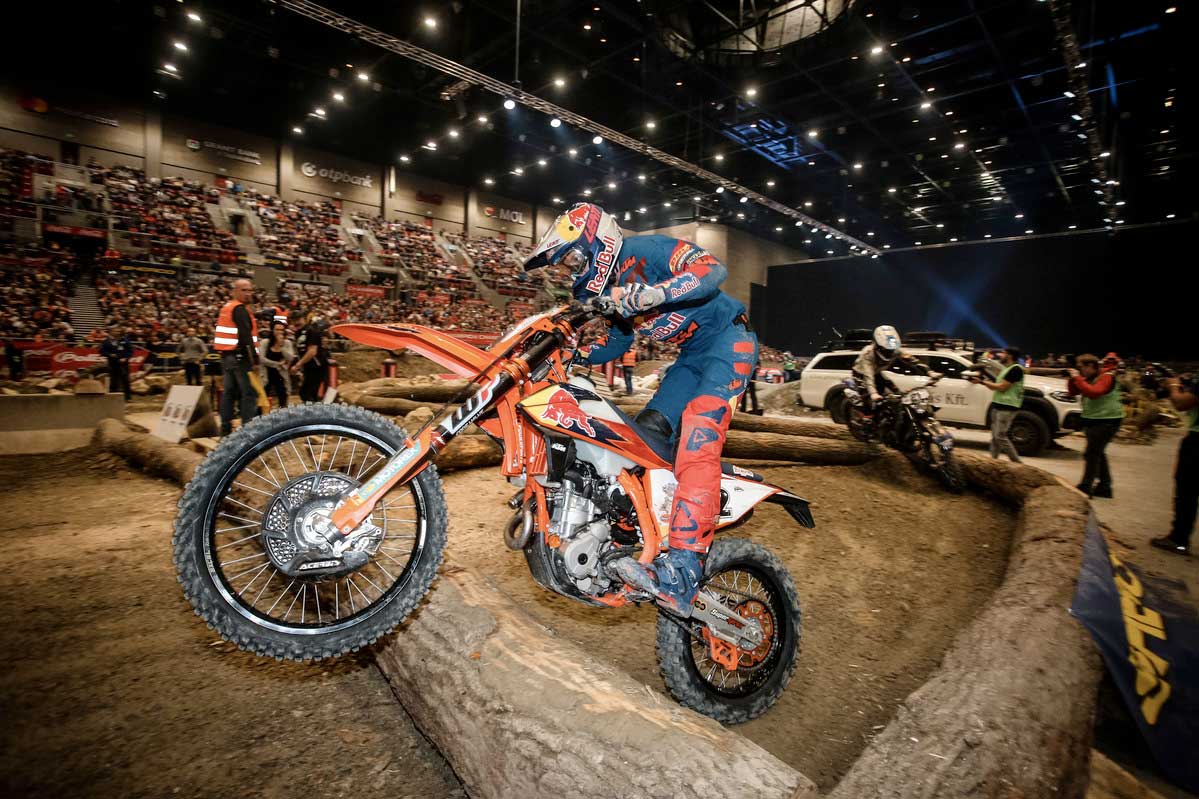 Finding his form in the second half of the championship, Jonny Walker raced his way to the runner-up result in Budapest, while also securing a race win. Photo: Future7Media
In the final race of the night Jonny Walker once again took to the front with his pacy but precise style, but this time he could not hold off Bolt. The #22 rider made a small mistake in the melee and while he was also suffering with arm pump he found it hard to fight back. Blazusiak was looking keen and found himself in the lead for the first time of the evening, but Bolt was neck-and-neck with the SuperEnduro ‰Û÷GOAT‰Ûª. Under pressure from the wild Brit, Taddy made a mistake that allowed Bolt to take the lead. Blazusiak was also passed by Walkeer. Alfredo Gomez also snuck through to 3rd as Taddy suffered from his set-up choices again.

With 227 points already clocked up Bolt leaves Hungary 16 points ahead of Blazusiak.

‰ÛÏI am very satisfied with my evening here in Budapest," Bolt said. "I made a lot of mistakes in the first race, so I changed my approach for thee following races. The team coached me well, telling me to calm down and relax more. Arriving in Poland with a 16 point lead seems like a lot but it‰Ûªs far from enough, the championship is never over until it‰Ûªs over and SuperEnduro is unpredictable, there is still so much that can happen.‰Û 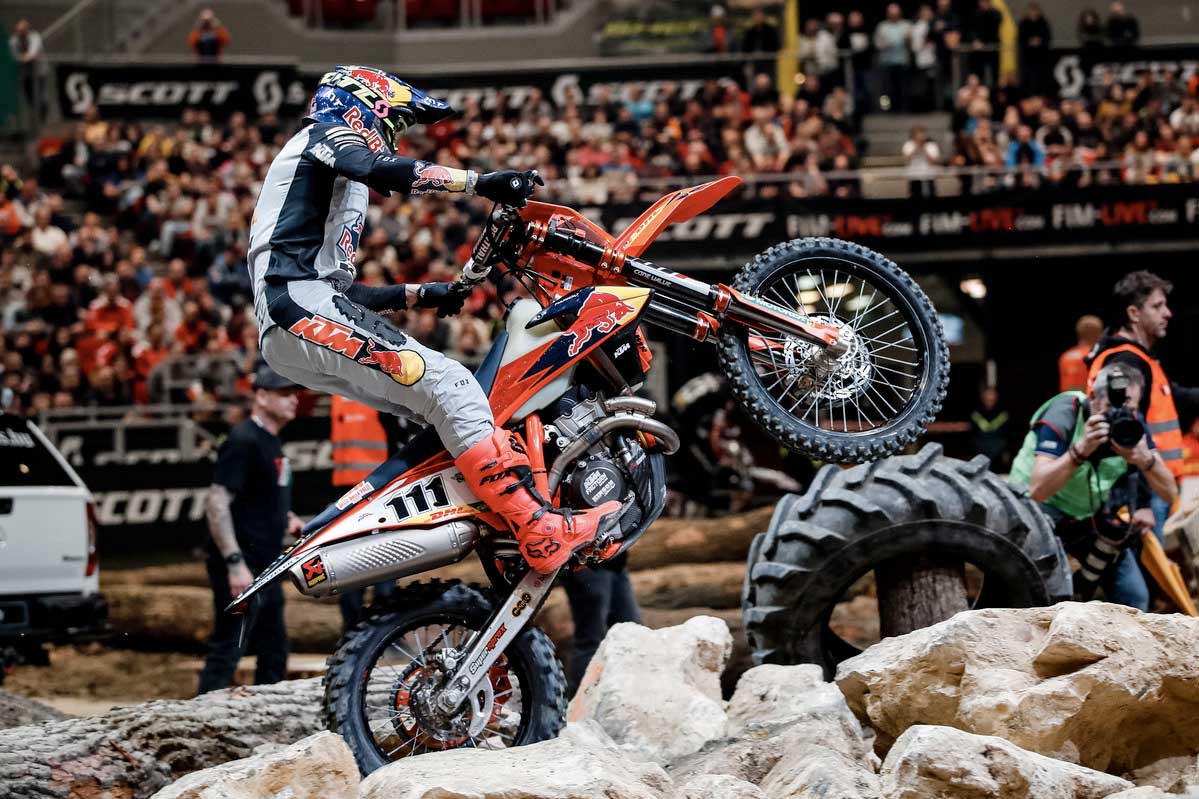 For Taddy Blazusiak, Budapest didn‰Ûªt pan out as hoped as the Pole found himself unable to ride the increasingly slippery course like he wanted to. Photo: Future7Media
Blazusiak was not happy with his settings and said he was in trouble all night.

‰ÛÏIt was a difficult evening, but I must admit that I chose the wrong settings for my bike, I thought that the track would evolve completely differently," Blazusiak explained. "I found myself in trouble all evening. However, I did what I could, and I can‰Ûªt wait to race in Poland in front of my home fans, I‰Ûªll give it everything until the last moto!‰Û 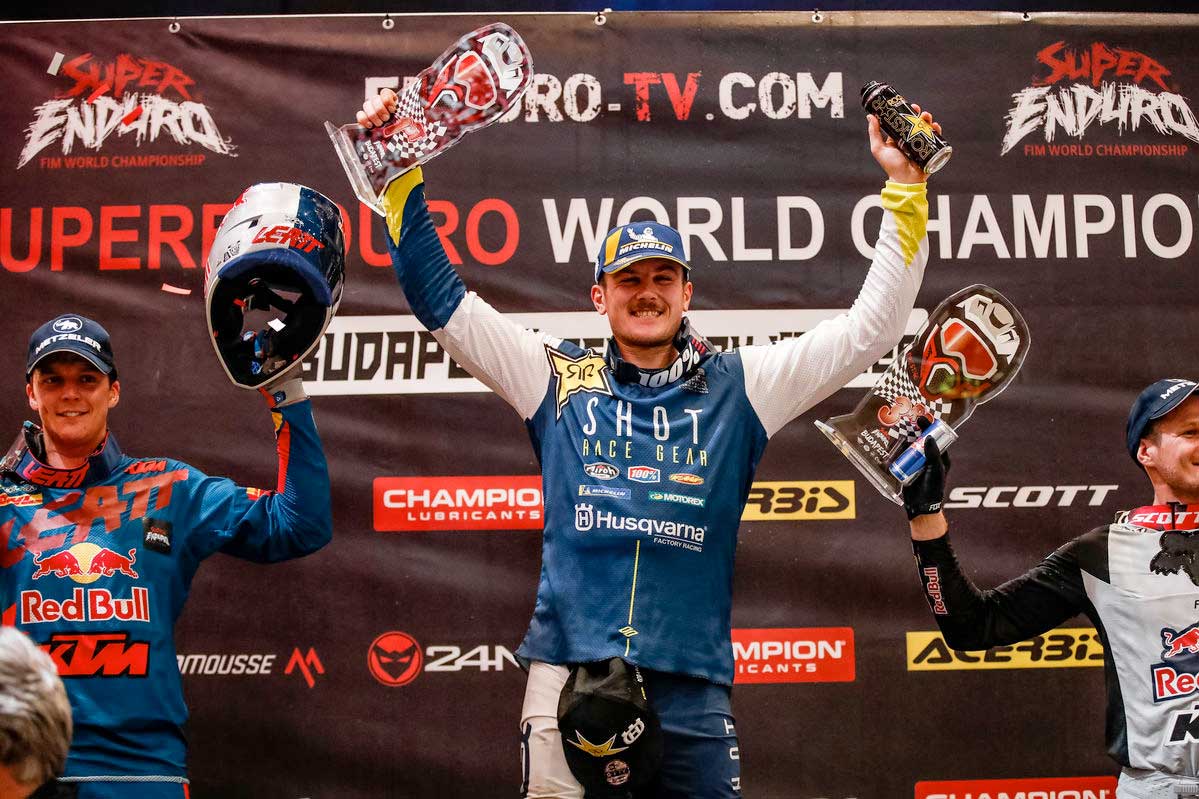 Regaining control of the leader‰Ûªs red plate last time out in Spain, Bolt arrived in Hungary determined to build on that performance. Photo: Futuree7Media
Prestige Class Results Round 4 of 5: