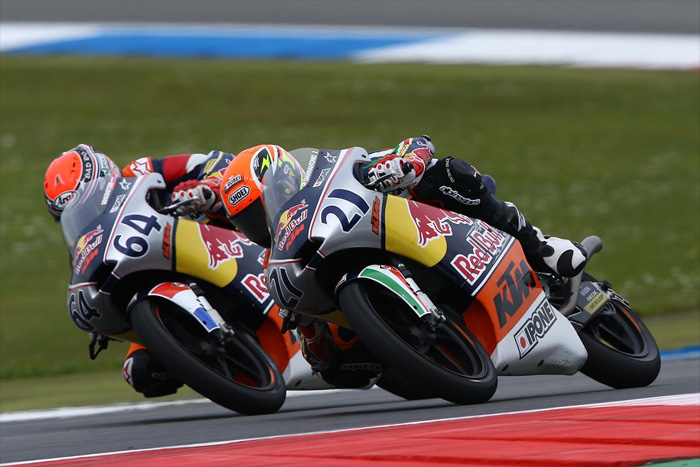 Bo Bendsneyder got the best of a wheel-to-wheel battle with Fabio Di Giannantonio to win Race 1 at Assen by 8 hundredths of a second.

The 16-year-old Dutchman went into the race as firm favourite having won both races in Jerez and set off from Pole in determined style but his 16-year-old Italian rival raced him all the way.

Third placed Oscar Gutierrez was nearly 12 seconds adrift but that was because the leading pack was split up on lap 4 when Olly Simpson highsided dramatically, accelerating onto the back straight. As the unfortunate 17-year-old Australian dislocated his shoulder, Dutch 16-year-old Robert Schotman hit his machine and also fell, uninjured.

Having qualified almost half a second quicker than anyone else Bendsneyder was confident enough going into the race but knew that Di Giannantonio and Gutierrez could well be a threat.