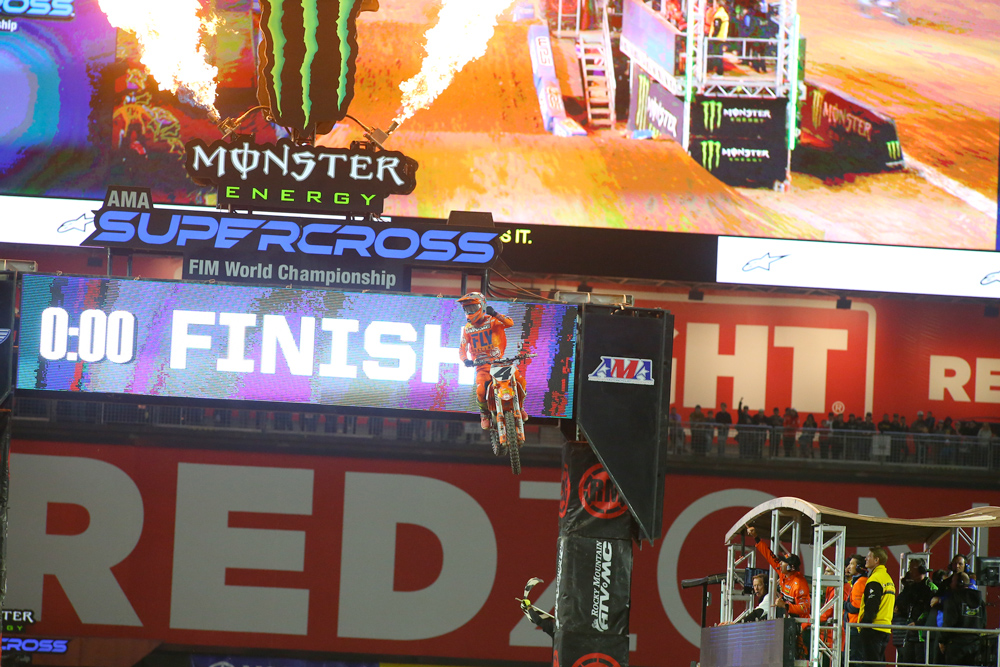 Blake Blaggett claims his maiden 450sx win - Credit: Supercross Live
Round two of the Monster Energy AMA Supercross Championship was run under much better conditions than round one with Blake Baggett and Adam Cianciarulo taking the wins in the 450SX and 250SX classes respectively at Glendale, California.

With Glendale being a roofed stadium the racing was run in much better conditions than the muddy opening round. With dry fast conditions and an exciting track, many of the contenders were back looking for a better performance.

KTM mounted Marvin Musquin came out firing in 450SX heat one and took a much-needed win after a less than Stella result at round one. The Frenchman didn't have it all his own way with Malcolm Stewart paying close attention, Stewart took the lead mid-race but made too many mistakes and was relegated to third buy HRC Honda's Cole Seely by race end. Round one winner Justin Barcia, Cooper Webb and opening round star Dean Wilson were all locked in a battle for 4th with Barcia taking 4th ahead of Webb and Wilson.

"It's good to get a win, it's only a heat race, but we are building," Musquin said after the heat.

Australian Champion Justin Brayton came out firing taking the holeshot and leading every lap of heat two, incidentally Brayton also won his first heat race at the same round last year. Vince Friese held second for all but the last minute when a hard-charging Chad Reed took the spot after climbing up through the field from 6th at the start. Friese held onto third ahead of Blake Baggett and Aaron Plessinger.

Jason Anderson qualified 6th ahead of fastest qualifier Justin Hill. HRC's Ken Roczen scraped through with 7th while contender Eli Tomac failed to qualify after what appeared to be bike problems in the opening laps saw him try to come back from last. Unfortunately, the Monster Energy Kawasaki rider fell a few spots short and was sent to the LCQ for the first time in five years.

"I had something weird happen there during the heat race; It just sort of locked up," Tomac said. 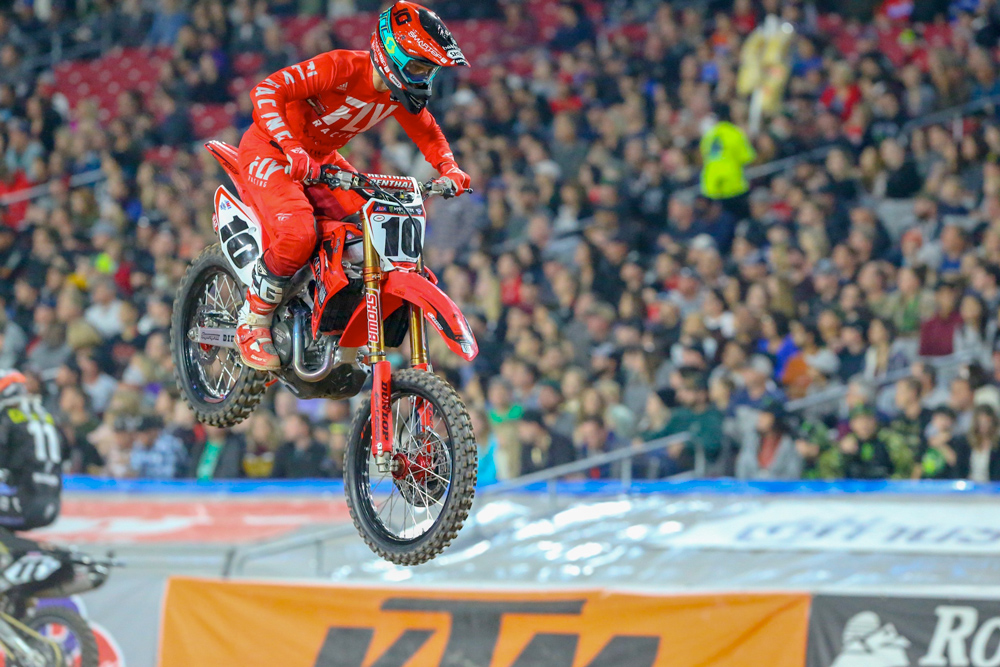 When the gate dropped on the main event Ken Roczen made an impressive start from the outside after a having a bad gate pick to take the holeshot over the KTM duo of Marvin Musquin and Blake Baggett. Defending champion Jason Anderson was back in the mix running 4th on the opening lap. Heavy hitters Tomac, Barcia, Webb, Wilson, heat two winner Brayton and Chad Reed all ran mid-pack.

Anderson was riding with a renewed fervour and quickly passed Musquin to move into second.

After a lengthy delay, riders lined up line astern for a single file re-start with Ken Roczen leading the field through the first turn.

Anderson took full advantage of the re-start, locking on to Roczen's rear wheel before making an aggressive pass for the lead that left Roczen's bike on the ground, with German re-mounting in fourth position.

Anderson built himself a comfortable lead of over two seconds, from Baggett, however Baggett was not done and with just a handful of laps remaining caught Anderson before making a clean pass around the outside of the 2018 champion, and quickly built an unbeatable lead, crossing the finish line to take his maiden 450 Supercross win.

"To be able to feel good enough to run behind Jason, ahh, I have had weekends where I have had to run the pace with those guys, Kenny as well, then some weekends they leave me in the dust, so it feels good to finally get my whole program together and win a round against those guys." Baggett commented from the podium

Anderson held on for a second place finish, while Roczen was able to catch and pass Musquin to round out the podium and in the process take the championship lead by a single point ahead of round one winner, Justin Barcia who finished the night back in sixth position.

Tomac, who made the main event via the LCQ was also able to make a late race pass on Musquin to finish in 4th with the French rider being regulated to 5th.

Brayton had to settle for a 7th place finish after his heat race win, crossing the line ahead of Dean Wilson in 8th, Cole Seely in 9th and Cooper Webb rounding out the top ten.

After showing tremendous speed to finish second in his heat race, the Reed was not able to replicate the magic in the main event finishing the race in 14th position. 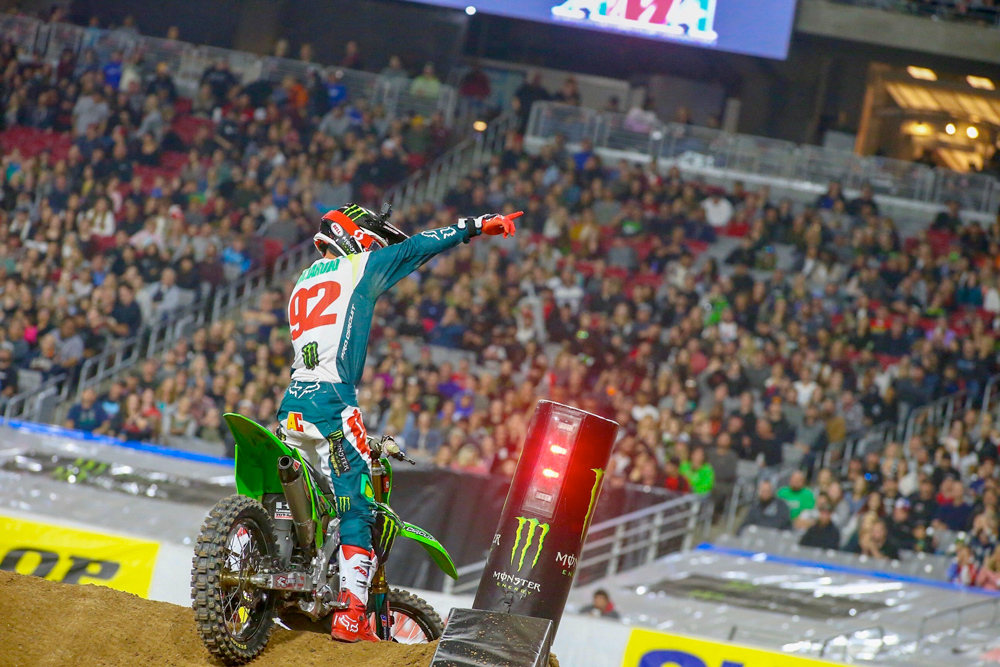 Adam Cianciarulo put a full main event together to take a comfortable win in the 250 West class.
250SX

Round one winner Colt Nichols took out heat two after passing early leader Jimmy Decotis on the second lap, from there the Star Yamaha rider checked out. Decotis stayed in second finishing just ahead of a hard-charging Dylan Ferrandis who fought his way back from his opening lap in 8th place. Michael Mosiman and Honda's Cameron Mcadoo finished 4th and 5th respectively.

The fifteen minute 250SX main saw Cianciarulo take the holeshot ahead of Mcelrath and Decotis with last weeks winner and runner up Nichols and Ferrandis 4th and 5th respectively on the opening lap. Ferrandis, on what was becoming a slick technical track, soon crashed and dropped to 16th leaving a big fight ahead. By lap three Cianciarulo was already out to a four second lead.

Most of the action for the first half focused on Decotis and Nichols who were going toe to toe, Nichols eventually winning the battle and setting his sights on Mcelrath in second place. A few more laps and Nichols had demoted Mcelrath and was on a mission to cut the 10 second lead of Cianciarulo. R.J Hampshire was another on the move and had moved up from a bad starting position to 5th by lap eleven and then quickly demoted Decotis to take 4th.

Unlike the opening round at Anaheim were problems abounded for Cianciarulo, he kept complete composure in Glendale to secure maximum points with his 7th career victory, almost 12 seconds ahead of Nichols. Nichols' second place and will see him retain his championship points lead with a five point advantage heading into the third round. Mcelrath held off a charge at the flag from Rj Hampshire to grab the last podium place. Decotis was 4th with Ferrandis salvaging 5th after his crash.

"I got through the first corner, unlike last week. I'm really tired of being the guy that just has potential. We just went back to the drawing board this week," Cianciarulo said after the race.

Australian privateer Tomas Ravenhorst ran as high as 7th in his heat race before dropping back to 11th but then rebound to grab the last qualifying spot on the second last lap but then dropped to 10th on the last lap and was sent to the LCQ; he then went on to finish 15th in the LCQ. 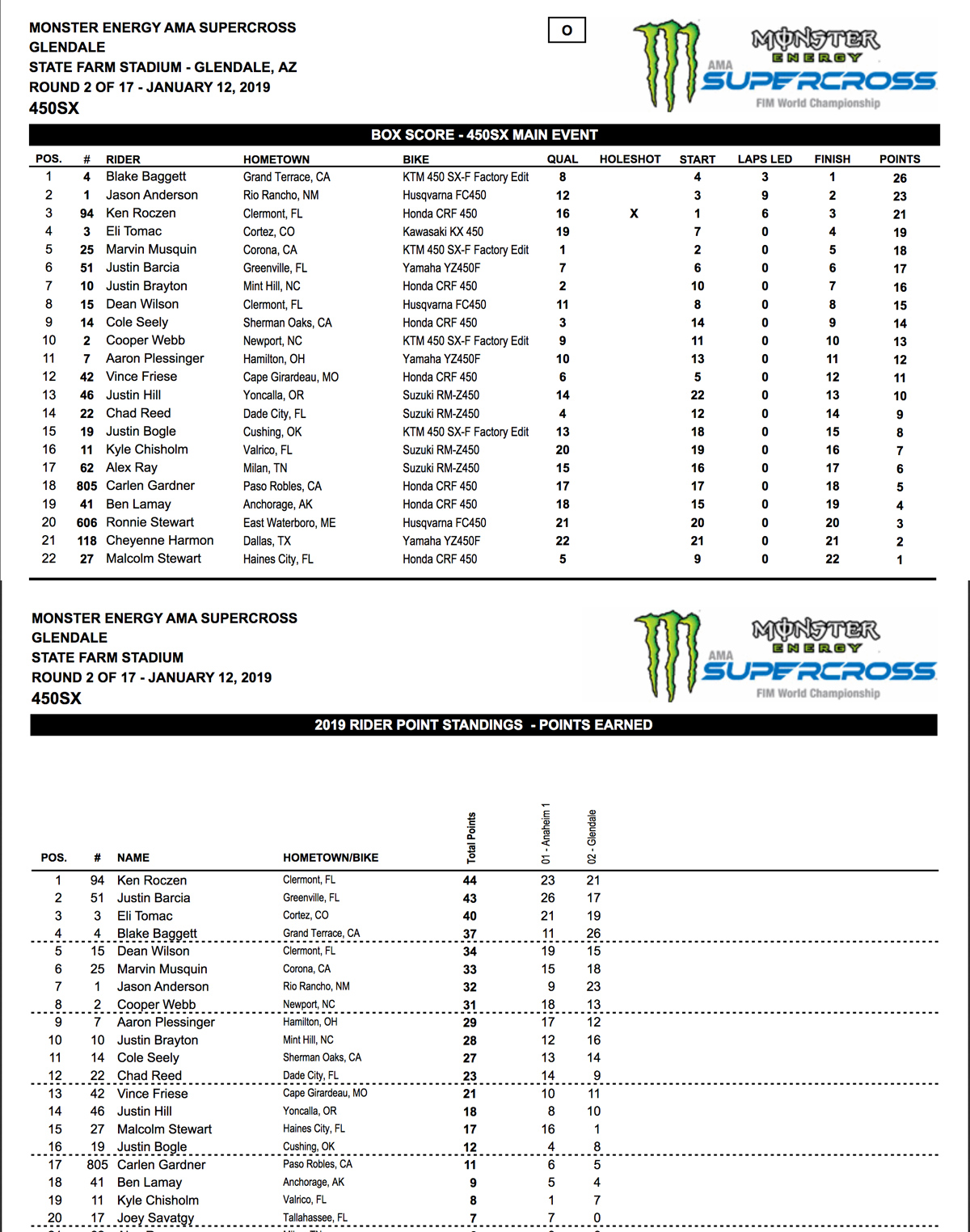 450 Round Results and Championship Standings. 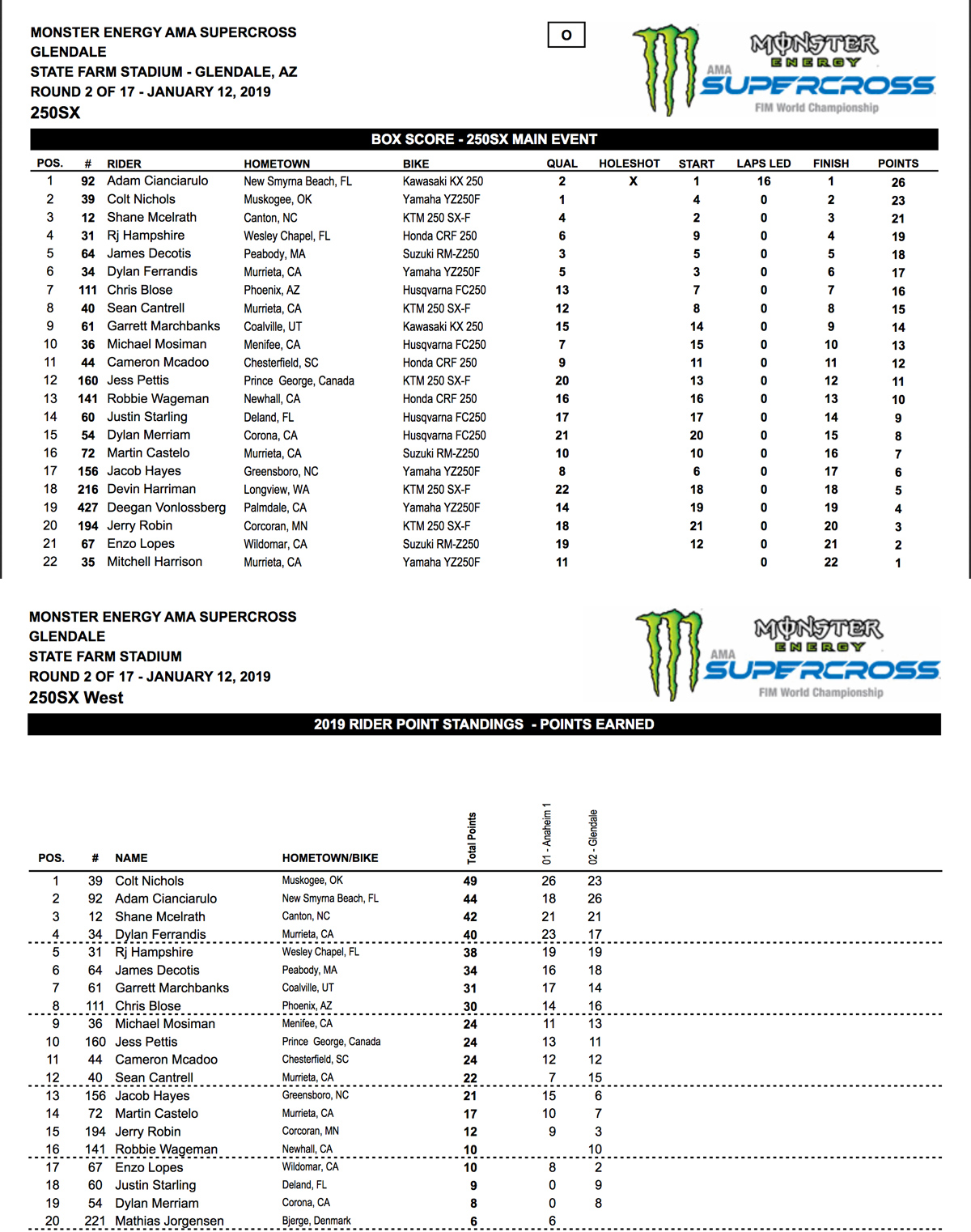 250 Round Results and Championship Standings.