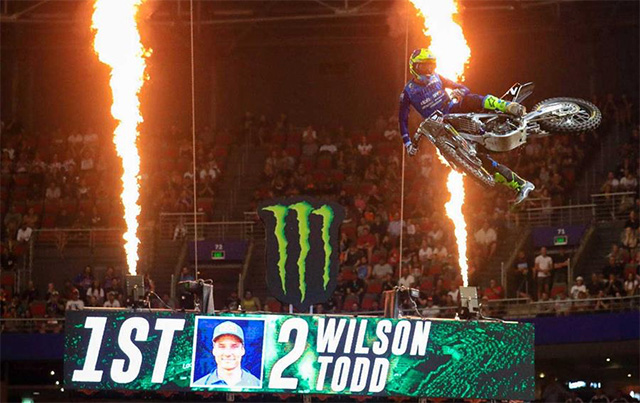 With the AUS-X Open bringing the racing back indoors for not one, but 2 separate rounds of racing, the DPH Motorsport unveiled chrome livery that proved incredibly popular with fans and racers alike for the biggest race weekend on the calendar.

In front of over 27,000 people, DPH Motorsport's Wilson Todd, Kade Mosig and Boyd Hocking represented the team on track, while injured SX2 racer Hayden Mellross was on hand all weekend meeting fans and signing autographs over the 2 days of racing that proved to be bitter sweet for the team.

Wilson went 1-11 in the SX2 class but still sits only five points away from current championship leader Jackson Richardson.

"It was a tight, short track which meant even the smallest mistakes had an impact on your entire race, but I felt really good all weekend, getting every holeshot and riding consistent to get that race win on Saturday night" said Wilson Todd.

"Sunday I was feeling strong again winning my heat and getting the holeshot in the final, but when Chris Blose hit me and we both went down, it bent the bike, making it really hard for me to attack the track and I dropped it a few more times trying to push forward".

Kade Mosig carded a 4-10 results over the 2 rounds and now sits in 6th in the SX1 championship hunt.

"I'm a racer and I want to win" said Mosig "Saturday night's result was great being the 2nd championship contender home, but I want to see 1 next to my name not 4, it was a step forward of sorts from last rounds 3rd place.

"Sunday's final was one to forget really, after going down in the first turn, I was pushing hard to regain some flow and consistency, but forced some errors and kept me further down the running order. I had a lot of fun and enjoyed the best event of the year".

Boyd Hocking has not ridden Supercross for a while and despite the lack of racing time was happy with the weekends result. "It was so good to race supercross again" said Boyd. "After racing road bikes all year, it was awesome to go out and put in some laps against some of the best in the world. All in all, I'm pretty happy, I didn't really have any expectations or pressure on me so I just had fun".

It was a roller coaster weekend for Team Owner, Dale Hocking.

‰ÛÏWhat a weekend" said Hocking. "We rolled the bikes out of the truck on Saturday and the chrome livery was an instant hit and looked even better once we got under the stadium lights. Wilson went on to really dominate the SX2 class with great starts, race wins and the final win, while Kade's 4th in the SX1 final saw him riding strong all day, becoming the first Yamaha home and the 2nd Australian behind Anderson, Wilson and Reardon.

"Sunday was a bit of a disaster though really with Wilson being taken out by a rider not in the championship hunt, and a first corner crash dropping Kade down the running order. It was a tough way to finish the weekend, but now we move forward and concentrate on the final round next weekend".

The DPH transporter is now on the way north to Jimboomba for the 6th and final round of the Australian Supercross Championship next weekend.