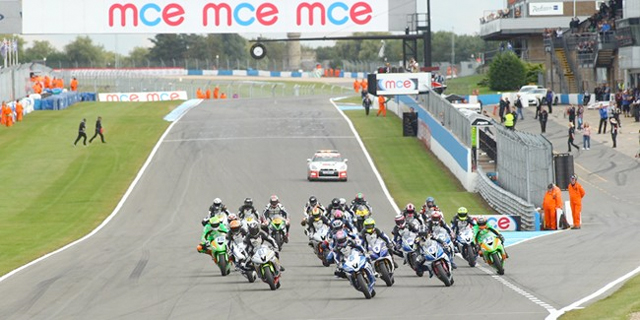 Billy McConnell powered to his second victory in as many races to underline his late bid for the Motorpoint British Supersport Championship crown as he finally overcame the determined Flying Scot Stuart Easton in a race long thriller in the Sprint race at Donington Park.

Riding the Martrain Yamaha, former champion Easton had made the running for the first half a dozen laps before McConnell pushed ahead through the fast Craner Curves but the Smiths Gloucester Triumph rider was not able to hold the upper-hand for long. Easton fought back regaining the lead at the Esses but again McConnell came back and riding hard took the victory by half a second

Easton took consolation at finishing second best as he pegged vital points on his key title rival Alastair Seeley, who already sore from a tumble in the previous round at Cadwell Park took a further blow when he crashed in the wet Friday free practice.

Despite an injury to his right arm he took ninth place on his Gearlink Kawasaki but his lead over Easton was cut to nine points. 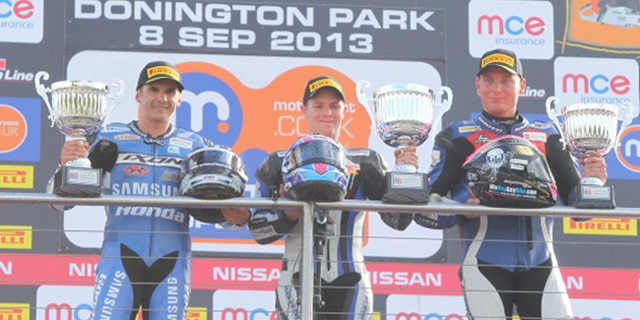 Two Australian's in Billy McConnell and Jason O'Halloran stood on the podium at the conclusion of the feature race at Donington on the weekend - Credit: britishsuperbike.com
Stuart Easton put himself back on top of the Motorpoint British Supersport Championship standings following his seventh race win of the season for Martrain Yamaha in a hard-fought Feature race at Donington Park.

On the opening lap Glen Richards hit the front of the field but he was soon under attack from his Smiths Racing Triumph team-mate Billy McConnell who made a move on the opening lap to move ahead. The lead changed again though as Gearlink Kawasaki's Ben Wilson made an impressive move on the leading pair to snatch the advantage.

Wilson held the lead until the third lap when McConnell again moved ahead into the lead as the main protagonists scrapped for positions. Samsung Honda's Australian Import Jason O'Halloran was also moving up the order and he had closed in on the leading pack as Wilson crashed out of contention at Mcleans.

At the front Easton carved his way through to take the lead by the ninth lap, but it wasn't without a fight as McConnell and O'Halloran pushed him until he was able to edge out an advantage.

McConnell and O'Halloran had an epic scrap for the second place and the pair took the fight down to the wire until a crash from Glenn Irwin at Craner Curves caused a red flag, but he was able to walk away. O'Halloran had the edge after a move at the Old Hairpin to score second with McConnell in third.

Glen Richards claimed fourth ahead of Taylor Mackenzie who scored his first top five finish for Tyco Suzuki. Gearlink Kawasaki's Alastair Seeley was forced to settle for eighth place as he fought the pain barrier from his crash on Friday.