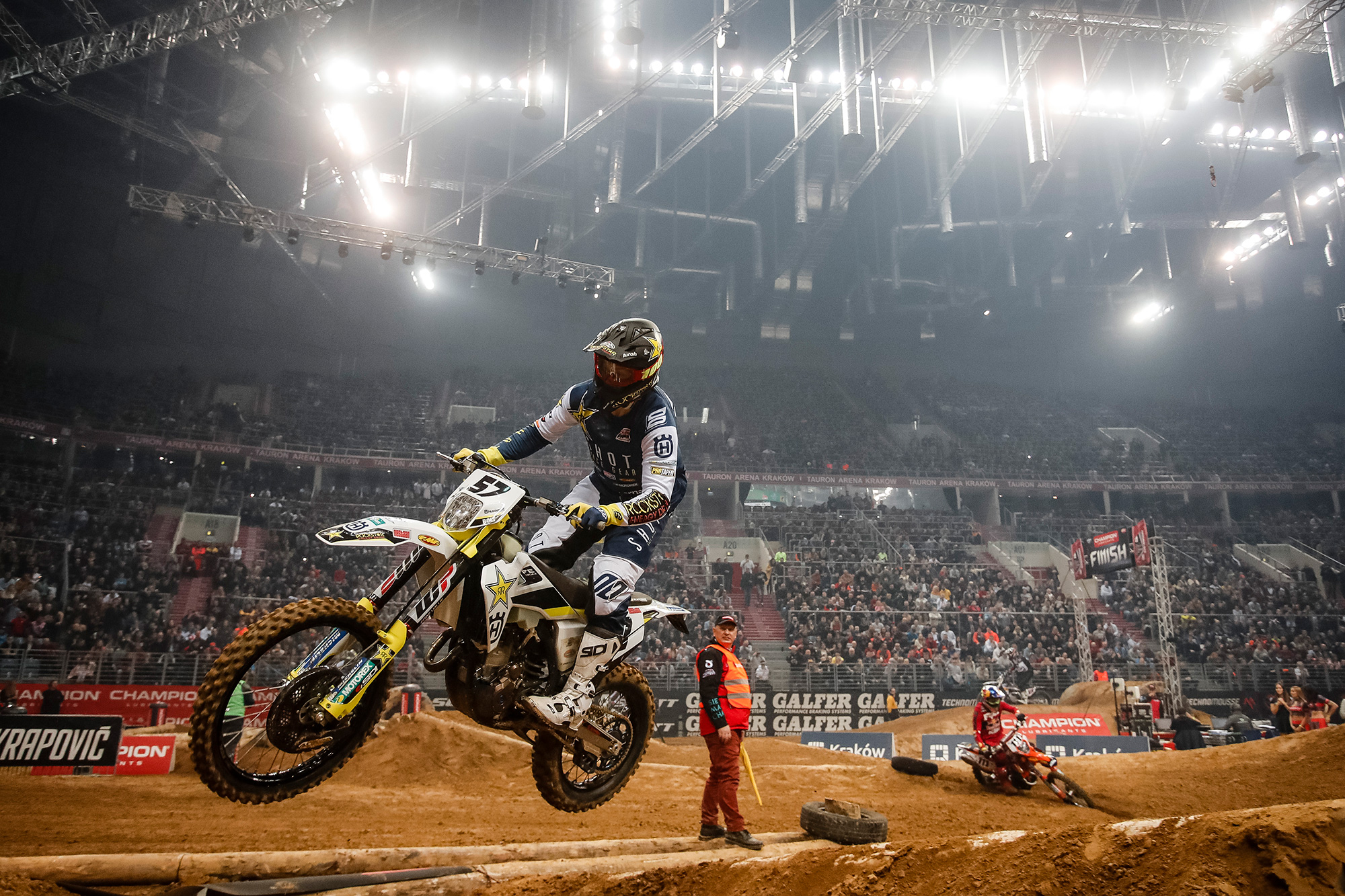 Making a triumphant return to SuperEnduro racing having missed the entire 2019 season due to injury, Billy Bolt made his presence felt inside the Tauron Arena. Mastering the unpredictable and technically demanding course. Photo: Future7media
For the 4th year in a row, the Tauron Arena in Krakow, Poland, was packed to the rafters at the 2020 FIM SuperEnduro World Championship kicked off.

Local hero and superstar, Taddy Blazusiak aimed to shine in front of the 14,000 of his home fans, who chanted his name at every opportunity.

To kick the night off, the Akrapovic SuperPole allowed the seven fastest riders from timed practice to make their mark on the extremely technical Polish track. The crowd were stunned to see a returning Billy Bolt secure the best time from under the nose of Blazusiak, although they seemed to appreciate the young Brit‰Ûªs panache! Jonny Walker also set a quicker time than his team-mate, Taddy Blazusiak, who had to settle for 3rd. This set everything up for a wild night of racing.

12 months ago, Billy Bolt was forced to watch the season kick off on TV whilst confined to a hospital bed. The victim of a serious left leg injury, the British rider had to sit out the entirety of last season. Therefore, he was determined to prove his skills and speed right from the start of this new 2020 season‰Û_.


When the gate dropped for Race 1, Bolt was quick to get into the lead ahead of Taddy Blazusiak. But the Pole, keen to win at home, made a pass straight back on Bolt. The pair remained neck-and-neck, engaging in a fantastic fight which lasted for several laps and sent the Tauron Arena into a frenzy. Blazusiak went for one final attack, but Bolt pulled out a lad of 3.9 seconds and took his first race victory since March 2018.

Behind this epic battle, Jonny Walker struggled to find his rhythm on the tricky track. The English rider getting caught up in the carnage several times. He nevertheless managed to finish 4th in the first race by gritting his teeth and carving through. Alfredo Gomez took his first Top 3 of the evening.

In the second race of the evening, Taddy Blazusiak got his revenge on Billy Bolt as he forced the crowd to knock their support up a notch with his excellently crafted race. When he crossed the line with a victory, the fervent fans were beside themselves. Bolt, meanwhile, found himself hampered by the ‰Û÷reverse grid‰Ûª start. Although the youngster impressively pushed himself through the field to take valuable points and 2nd place. Gomez was 3rd once again, a little way behind the leading pair. The Top 5 was completed by Jonny Walker and South African Blake Gutzeit. Taddy Blazusiak looked to add to his multi-year win streak inside the Tauron Arena but came up one spot short. Photo: Future7media
It was all to play for in the final race of the night; Bolt or Blazusiak, whoever won Race 3 would be the overall victory in Krakow! The two riders proved to be in a league of their own as they slotted into 1st and 2nd, with Blazusiak taking the initial lead. The big crowd urged their hero on, but Billy wasn‰Ûªt caving under the pressure; after 4 laps, he led by more than 4 seconds over Taddy. Meanwhile, Jonny Walker suffered a big crash on the rocks but still managed an impressive comeback to 4th place in the race, and overall.

Several riders battled it out for the final podium place, but young guns Gallas and Gutzeit could not out-pace SuperEnduro veteran Gomez - the Spaniard finishing 3rd in all three races, and therefore taking a decent 3rd overall.

And so, much to the surprise of the Polish fans, Billy Bolt returned with a flourish to take the lead in the provisional standings ahead of Blazusiak and Gomez. However, things are still tight at the top, with Bolt and Blazusiak separated by just 5 points, and Walker only 4 points behind Gomez. 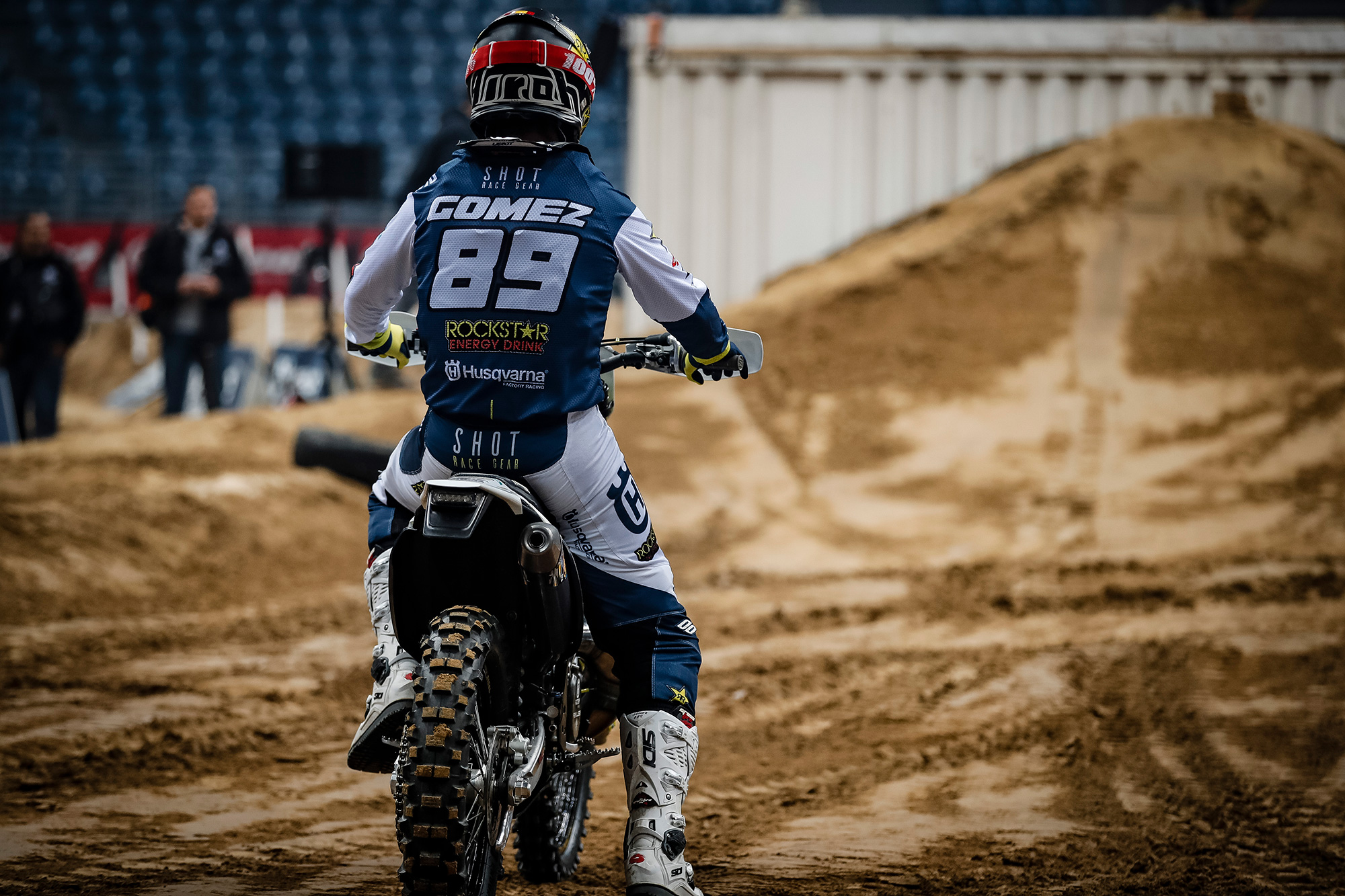 Alfredo Gomez 's 2020 SuperEnduro season got off to a flying start. Targeting a top-three result entering Poland, the Spaniard achieved exactly that by securing the third step of the podium. Photo: Future7media
‰ÛÏI‰Ûªm over the moon to come away from round one with such a good performance and the championship lead," Bolt enthused. "With two race wins and the SuperPole it‰Ûªs been a fantastic night. I knew coming here I wouldn‰Ûªt be the favourite in Taddy‰Ûªs home stadium but I just focused on what I could do. The track itself was so tricky, the dirt was unpredictable and a lot of the obstacles slippery, especially the rocks. Fastest in SuperPole was a great confidence boost. It was a big battle with Taddy in race one - we changed the lead a lot but it worked out in my favour. For the final race things just clicked right. I found the groove I wanted and the laps times came to me. Twelve months ago I was sitting in a hospital bed watching this race happen without me, now I‰Ûªve won it and go to Germany with the points lead - I can‰Ûªt ask for better than that!‰Û 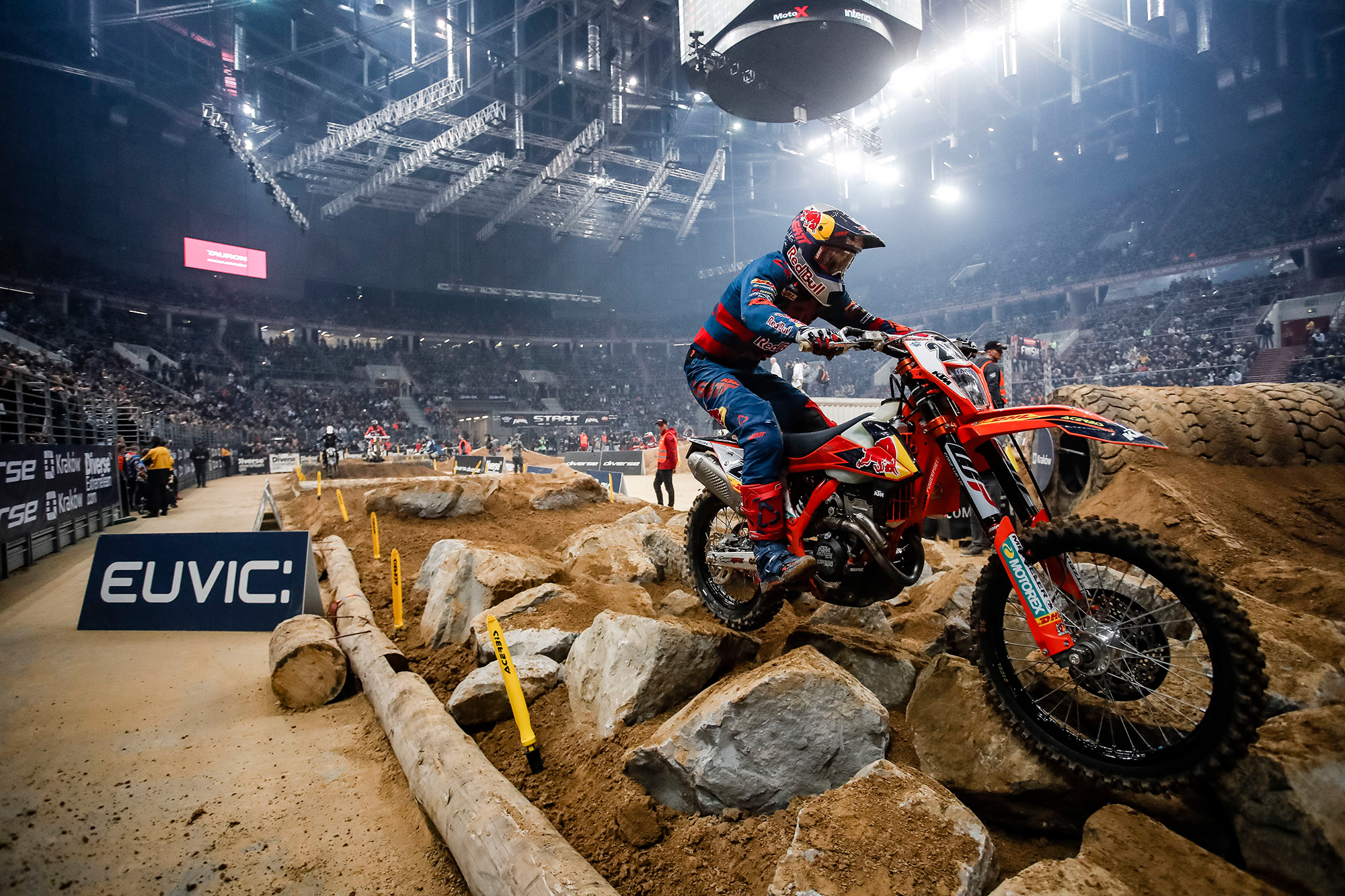 For Johnny Walker, Krakow marked his return to competitive SuperEnduro action having sat out the 2019 season due to a wrist injury., 4th was a respectable result. Photo: Future7media
Results 2020 FIM SuperEnduro World Championship Round 1: