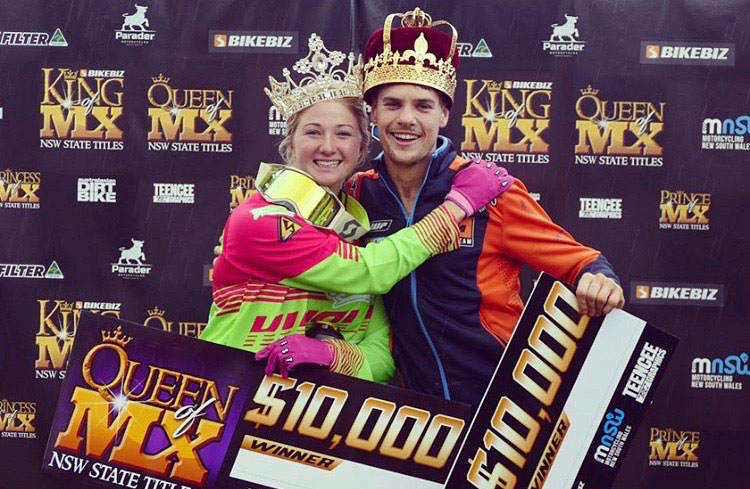 A ladies‰Ûª race and a men‰Ûªs feature race, each only ten minutes long, with a winner takes all prize of $10,000 guaranteed the action would be super fast, and elbows out all the way.

The Queen of MX race had some hot contenders from all over the country including current national champ Madi Brown, Meghan Rutledge, Tori Dare, and West Australian Tahlia O‰ÛªHare, who wrapped up the NSW Ladies State Title earlier in the weekend. 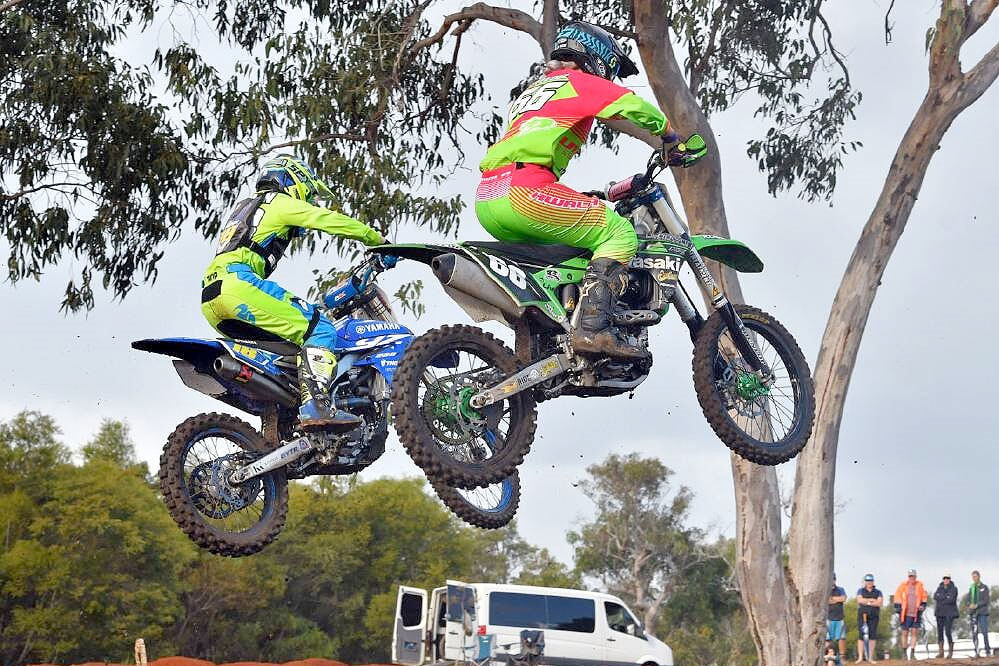 Meghan Rutledge (66) battled it out with current Australian Womens Champion Madi Brown for the Queen of MX title and walked away winner by a mere second.
Throw in World Enduro Champ Jessica Gardner and Emilie Karlsson into the mix, and anything could happen on a boggy track at Port Macquarie. Normally most fans would have picked the race to come down to Brown and Rutledge, but the form line wasn‰Ûªt great for either of them coming into the race, with Brown suffering multiple crashes and a mechanical failure in the 3 state title motos held earlier in the weekend, and Rutledge also tasting the Port Macquarie mud a few times, so it really was a case of anything can happen.

But when the pressure is on, the cream rises to the top, and the two fastest ladies in Australia put on a show.

Madi Brown took the lead after the first few corners and built up a gap of around 50 metres to Rutledge, but it never blew out to any more than that, and slowly but surely Rutledge started to reel her in. But could she actually catch her in the short 10 minute race format? With both girls having suffered crashes in the tough conditions over the weekend, the tension amongst the crowd was palpable as they watched the battle unfold.

Around 6 minutes into the short sprint race, Rutledge had caught Brown and was right on her, but passing was always going to be difficult. With a couple of minutes to go, Rutledge found a way past, but Brown was determined to fight back. The last lap was torrid, Brown desperate to catch up the ground she lost when Rutledge put the move on her and get back in front, and in chasing Rutledge down she set the fastest lap of the race on the last lap. Unfortunately for Brown, Rutledge put in a personal best too, which was enough to see her hold on for the win with a margin of only 1 second.

This one will arguably go down as one of the greatest races Australian women‰Ûªs motocross has seen.

Tahlia O‰ÛªHare was in third, just ahead of Enduro champ Gardner who edged out Karlsson to grab 4th in conditions well suited to the two enduro riders. 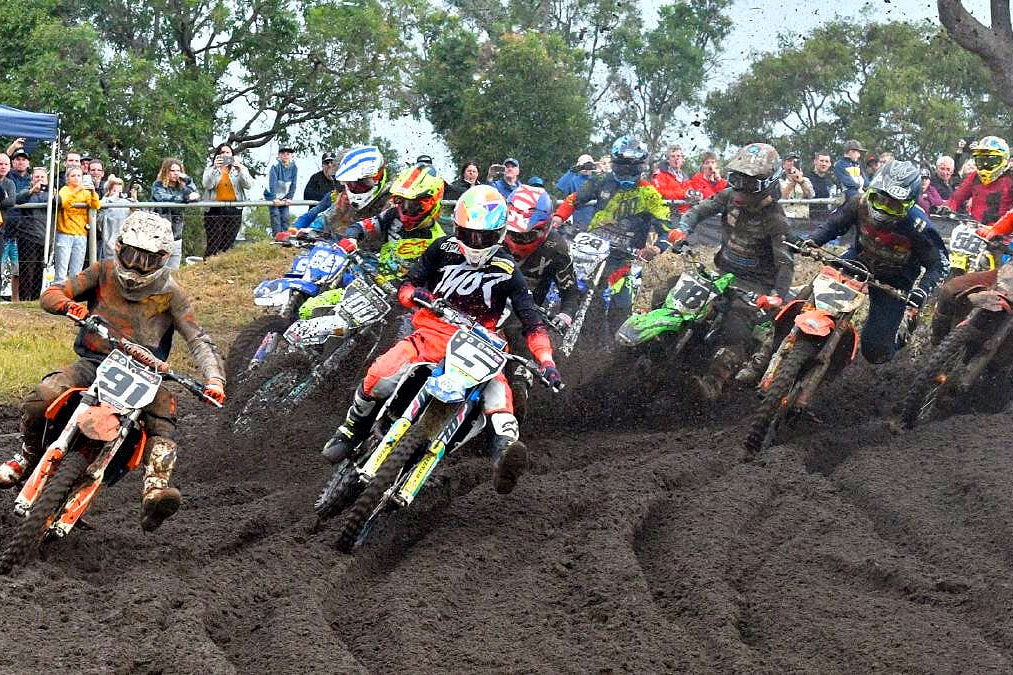 The King Of MX field was packed with talent and produced some great racing.
The King Of MX race promised to be an absolute belter, with some big names in the mix, such as Egan Mastin, Luke Clout, Aaron Tanti, Riley Dukes, Dylan Wills, Jesse Dobson, Matterson, Kale Makeham, Wood, Joel Wightman, Enduro specialist Stefan Granquist and Penrite CRF Honda Racing's Kyle Webster, who earlier in the day wrapped up the NSW MX1 Championship, along with Jy Roberts who had also wrapped up the MX2 State Title with 3 straight moto wins. This race had the top riders from all of the senior classes, and all eyes were on the first corner which would be make or break for some riders given the short sprint race format.

Webster, Tanti and Mastin had been super consistent and fast all weekend in MX1 and filled the NSW State Title podium in that order, and were expected to be a strong chance, as well as Joel Wightman who had good speed in the treacherous conditions. KTM‰Ûªs Luke Clout had a dog of a weekend in the 3 State Title motos, with a massive crash in turn 1 in his first race setting the tone for what was to come in his State Title hunt, but everyone in the venue knew he would be a threat in the big feature race.

A clean start for most racers set the scene for an Epic battle.

The expected carnage in turn 1 thankfully turned out to be not as bad as many feared with most riders making it through safely, but it did take a few scalps. Aaron Tanti was one to go down, and retired from the race, with Webster also having his race virtually ended. The next ten minutes saw everyone going hell for leather in the muddy conditions, resulting in almost half the field failing to finish due to crashes, so desperate were they to get their hands on the $10,000 winner‰Ûªs cheque.

Just like the ladies race though, it ended up being a match race out front between the two fastest men on the track, KTM teammates Luke Clout and Egan Mastin. 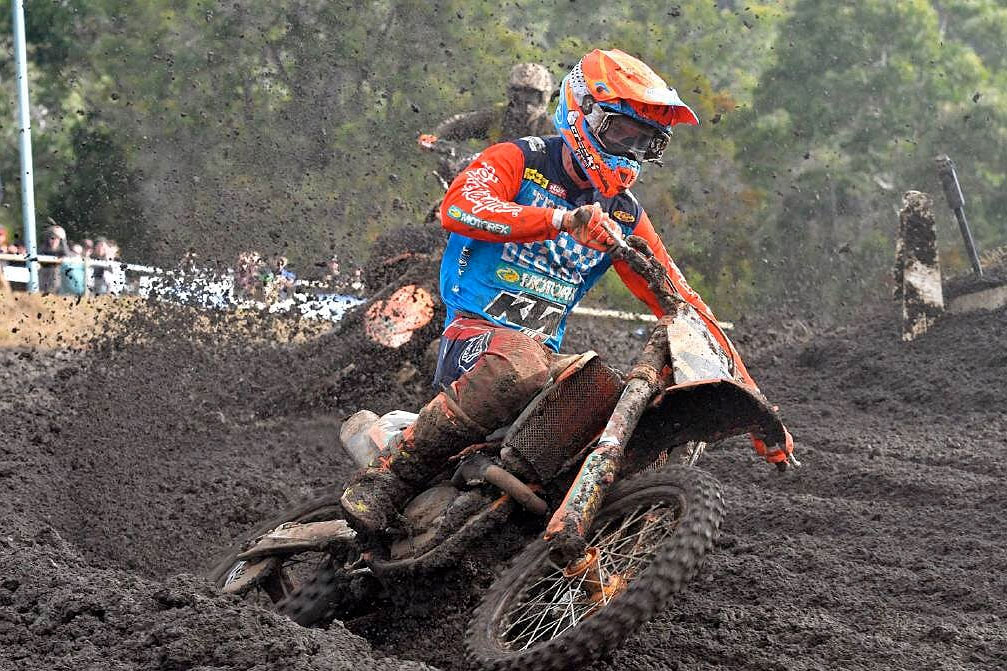 KTM Racing's Luke Clout held off team-mate Egan Mastin in the last corner to take the King of MX title.
Clout pulled a good gap in the first 5 corners of the race, with around 100m to Mastin and Dylan Wills. Mastin set himself to make up the gap on Clout, and set the fastest lap of the race on lap 4. Then right on cue, just to make the race even more epic, the rain came back, as it had done across the weekend.

It was a heavy downpour made more spectacular by the sun still being out, making the rain glisten. Clout forged on in front, and Mastin got ever closer. The action was spectacularly fast, with both riders substantially faster than anyone else on track, and both setting the fastest laps anyone had seen all weekend by 4 or 5 seconds. It was absolutely frantic. Would the rain change things? Would Clout‰Ûªs run of bad luck come back? One thing was for sure, the action unfolding on the track and the speeds they were running at meant not a soul left the fence when the rain came, everyone was glued to this contest, no matter how wet they got. Getting drenched was a small price to pay for the privilege of watching these guys bang bars. If they were out in it, we would be too.

It was clear that Mastin was gaining and if he continued at that pace, he could catch Clout before the end of the race. He edged closer and closer, and with half a lap to go was close enough to start trying to make a move. In the end, it came down to the last corner, and Mastin put in a dive up the inside, only for Clout to get better drive out of the sloppy mud and power across the line for the win by less than half a second from Mastin.

It was some of the fiercest riding anyone at the track had seen in a long time, with the 10 minute sprint format meaning nobody paced themselves, it was just a frantic dash as fast as you could go for the whole race, which provided an incredible spectacle for the large crowd.

So the first King and Queen of MX, Luke Clout and Meghan Rutledge, leave Port Macquarie $10,000 richer. Make sure you put this event in your diary for next year, as it‰Ûªs only going to get bigger and bigger. 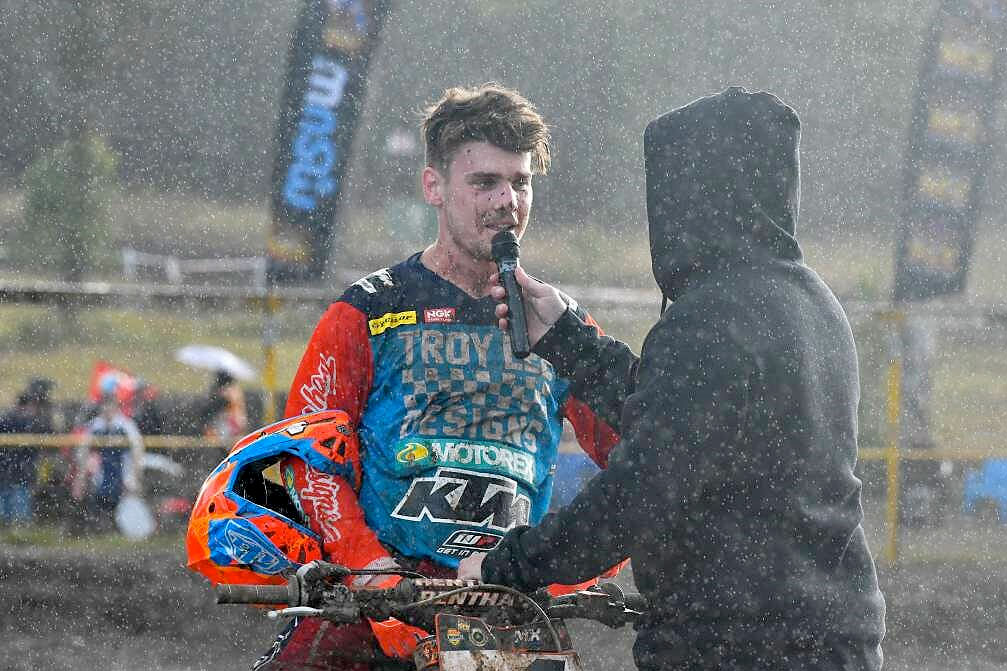 Conditions were far from perfect but with $10,000 in his back pocket for the win Luke Clout was not complaining!