Big Day Nears For Grabham As 2014 Dakar Closes In

As 2013 quickly winds down, Aussie desert racing hero Ben Grabham will enjoy the Christmas period in Australia before jetting out to South America on the 30th of the month for next year‰Ûªs Dakar Rally, which begins in Rosario, Argentina on January 5.

For one of Australia‰Ûªs most decorated and respected off road racers, it will be the second part of a two-year tilt at the off-road event considered the world‰Ûªs biggest.

The famous Dakar Rally is the toughest off-road racing challenge on the planet, and this year‰Ûªs 14-day epic traverses an 8,743 kilometre route through Argentina, Bolivia and Chile with a total of 5,228 kilometres of competitive stage.

Bathurst resident Grabham finished a spectacular 15th in this year‰Ûªs event in January, just eight months after a breaking his back in the Condo 750 race in April. 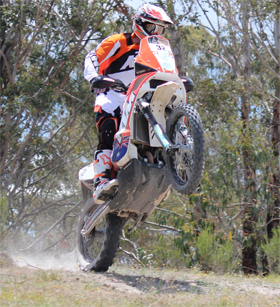 Ben Grabham
That attempt was something of a reconnaissance mission ‰ÛÒ learn the ropes, stay straight and safe and log a decent finish. This time, with the benefit of a training camp with three-time champion Marc Coma and a final stage win in the Moroccan Rally behind him, Grabham‰Ûªs intentions are much more outcome oriented.

‰ÛÏIt‰Ûªs been a lot more relaxed heading into my second Dakar having a bit more of an understanding of what‰Ûªs ahead, not like last time when I was trying to prepare for anything." Grabham stated.

‰ÛÏLast time I felt pretty fresh body-wise at the end, I was just mentally fatiguing from the concentration and the navigation. This time I‰Ûªll push on a bit more physically and hope that what I‰Ûªve learned about the navigation makes it easier mentally.

‰ÛÏThis route will start in Argentina which I‰Ûªm looking forward to. I enjoyed it last year and found it very similar to Australian conditions, but it‰Ûªs important to be up the front so as not to lose time in the dust. After that, instead of Peru we‰Ûªre going to Bolivia for a day or two which is new to everyone so it should be exciting.

"It‰Ûªs a bike-only section with no cars or trucks so they should be able to make it more technical ‰ÛÒ that would be good because I‰Ûªve been doing more technical riding on the KTM 450 Rally lately. Finally we go to Chile where they‰Ûªll throw a bit everything at us like dunes and dry old crappy desert, before we finish in Santiago.

‰ÛÏMy bike should be a good one." Grabham continued. "Since I won the Morocco stage I‰Ûªve been told I‰Ûªll have a good bike but I‰Ûªll find out how good when I get there. I‰Ûªve definitely got a better feeling for the Rally bike than I had this time last year because I‰Ûªve had one in the shed these past few months. I know now what it can and can‰Ûªt do now so my feel is pretty good.

‰ÛÏMy support will be as good as it gets thanks to KTM Australia, the factory team is supporting me so it really doesn‰Ûªt get much better. They‰Ûªve done countless Dakars and they can point me in the right direction with any problem.